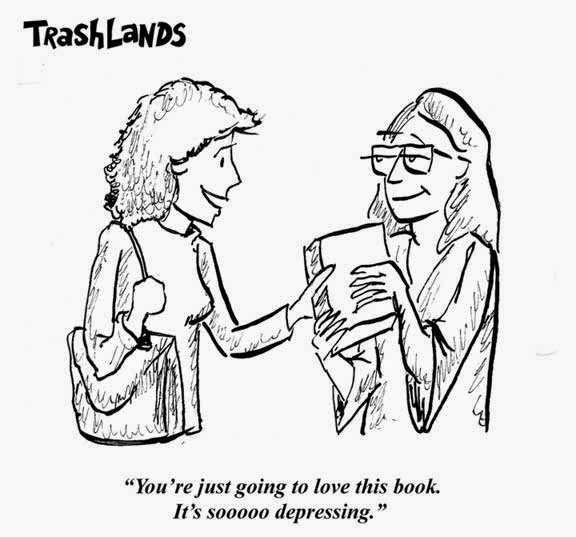 No, I don’t mean your first draft. I mean, has someone’s work moved you to such a point that you shed real tears? Movies…that’s easy. We all have our favorite cinematic tear-jerkers. Here’s just a few of mine:

Breakfast At Tiffany’s: Holly searches for Cat in the rain.
Roman Holiday: The Princess and the pauper Peck. Hopeless love.
The Vikings: Kirk Douglas gets his Viking funeral.
Field of Dreams: Costner plays catch with his father’s ghost.
Sophie’s Choice: Stingo reciting Dickinson over the death bed.
Spartacus: “Please die, my love… die, die now my darling!”
The Incredible Journey: Yes, even the old dog makes it home.

But the number of books that have made me cry I can maybe count on one hand. I cried when Jack the dog, reaching old age, had to be put down by Pa in the Laura Ingalls Wilder Books. I cried when Charlotte the spider died (but her babies lived on!) I remember reading Amy Tan’s Joy Luck Club on a plane and when I got to the scene where the mother explains why she abandoned her babies by the side of the road, I had to go hide in the bathroom and compose myself.

Are novelists more leery of the “cheap” reaction of tears? I think that is certainly true in crime fiction today. It is rare to find a novel, in these days of neo-noir aping and dick-lit posturing, that appeals to the emotions. We deal with the themes of death and loss all the time. We describe blood and guts with clinical accuracy. Why do we pull our punches when it comes to showing the emotional outfall of death?

I don’t believe it is just because movies are visual. What is more powerful than the blank screens of our own imaginations? I think it might be because today’s crime writers are leery of being labeled as soft when we go into matters of the heart. But to my mind, something very special happens when crime writers decide to write in a minor key.

Time out! Quick music lesson here. There are basically two ways you can compose something — in major and minor keys. And they sound distinctly different. In the western musical tradition, major-key music is played at times of celebration (think of Mendelssohn’s Wedding March or Happy Birthday), and fun times (Celebration by Kool And The Gang). Minor-key music is used to mark mourning (Chopin’s Funeral March), heartache (Back To Black by Amy Winehouse) and despair (Gloomy Sunday by Billie Holiday).

That memorable score to The Godfather, the one that captures the despair, bloody history, horror and complicated family love? It was written in C Minor. Now here is how it sounds when rewritten in a MAJOR key (Listen to just a couple seconds and you’ll be shocked.)

I’ll make him an offer that he…aw heck, on second thought, buy the old man a new horsey. ((Sunshine, lollipops and tommyguns every day…)))

Excepting many cozies, the tone of most crime fiction is minor key. (Although I find it interesting that the haunting theme for Dennis Lehane’s dark classic Mystic River is in C Major. Maybe because director Clint Eastwood wanted to go against grain and convey majesty and hope?) If you want to continue the music analogy, even romantic suspense doesn’t shy away from a darker feel at times. Yet I have found few crime novels that had me reaching for the Kleenex, that elicited from me a genuinely earned emotional response. Here are a couple:

Silent Joe by T. Jefferson Parker. The hero, a victim of child abuse, hunts for a kidnapper but every path leads him right back to uncovering the secrets of his own childhood. Sparse as a haiku but powerful and haunting.

Sandrine’s Case by Thomas H. Cook. Beautifully written like all his works but what starts out as a mundane murder trial with a semi-repulsive protag becomes a wonderfully humane love story. Think Gone Girl with a heart.

Lisey’s Story by Stephen King. Not technically a crime novel but I’m including it anyway here. It took me a while to get into this book, which slides back and forth between the real and woo-woo worlds as it tells the story of a wife coping with the aftermath of her writer-husband’s death. It is slow-building but powerful magic, King writing in B minor, about gently accepting one’s fate.

I had a conversation with a high-placed editor at a New York cocktail party last year. She told me she has noticed two trends in crime fiction recently: the decline of hard-boiled “guy books.” And the continued strength of romantic suspense. Now, let’s not kid ourselves. There is some terrific hard-boiled stuff being written right now, books that don’t turn up their noses at emotions. Likewise, there is some utterly putrid romance suspense on the shelves these days, stuff that gets everything about police procedure and forensics wrong and gets really treacly about the romance part. But where are the crime novels that hit you in the heart?

Maybe I am wrong. Or just reading the wrong stuff. What has gotten to you? What has made you cry? Movies are easy. But give me some books as well.