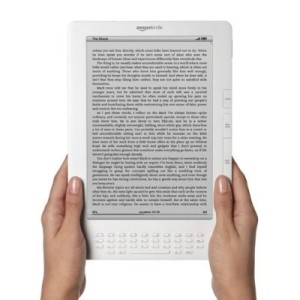 During a press conference last Wednesday to celebrate the release of their latest Kindle reader (more on that in a bit), Amazon.com CEO Jeff Bezos made a startling announcement: for books available in Kindle format, more than 35% of their total sales were for the Kindle editions. Considering the fact that the Kindle is still in its nascency, introduced a little over a year ago, that’s an astonishing statistic (especially since it was basically mentioned as an aside during the introduction of a new product).

Granted, there are still only around 275,000 books available in Kindle format (in addition to numerous newspapers and magazines, which the new “DX” model is supposed to ease the reading of). Major writers like J.K. Rowling have yet to jump on board the Kindle bandwagon, so you can’t read their books on the device (not a legal version, at least). But it certainly shows the tide is turning.

I also have it on good authority that a major online publishing site which already has more than 50 million users a month (that’s right: 50 million) is about to jump into the fiction game. They’re hoping to recast themselves as the YouTube of online publishing. Authors will be able to release their own books directly to the public, and the split will be 80/20…for a change, that 80% will be going to the author, not the publisher. Some publishers have already begun releasing new books-for free-on the site. This could potentially open the flood gates, hopefully having an impact on how major houses split royalties. In my first contract, e-book royalties (which were still a blip on the horizon) were split 50/50 between me and my publisher. The last contract, it was down to 15% of the digital list price. As a friend of mine said recently, it’s tough to fathom the reasoning behind that split when the bulk of the publishing costs will have been completely eliminated. And why would already established NY Times bestselling authors continue to hand over such a significant chunk of their profits when they could release a book online, for free, and take that 80%?

It was particularly interesting that Amazon announced this during the release of a pricier Kindle model, not the cheaper one I would have anticipated. It could be a brilliant move- college students are traditionally early adopters, and a e-reader that seems perfectly tailored to reading textbooks could be a huge seller, despite the price tag (you can buy a laptop for less than the $489 a new Amazon DX costs). But surely they have a more reasonably priced Kindle on the horizon.

Rumor has it that Apple has an e-reader in the works that will likely be as elegant and user-friendly as their iPod line. I’m willing to bet that by the end of the year, we’ll see e-readers in the $100-200 range, just in time for the holidays.

Getting back to Apple…what Bezos neglected to mention (again, surprising- clearly he needs to hire me for his marketing team) was a free application released in March that enables iPhone users to order and read Kindle books. Last October, an independent firm estimated that Apple had sold more than 10 million iPhone 3Gs; and that was before the Christmas rush. They have yet to say precisely how many Kindle units have sold, but when you start adding up those numbers, it’s already a significant chunk of the market.

I have both a Kindle and an iPhone, and the really cool thing is that I can be reading a book on one device, switch to the other, and it updates to the page I was on. The backlit screen can be tough to read for long periods, but for the length of a subway or bus commute it works great. The font size is large enough to read comfortably, and the pages are even easier to turn than they are on the Kindle. (However, you can only download Kindle books to the iPhone, not manuscripts sent in pdf format. Or if you can, I haven’t figured it out yet).

I’m going to argue, once again, that all of this is a good thing. I find that I buy more books now that I own a Kindle, not fewer-the Kindle editions are cheaper, and so easy to download, I make impulse purchases that I would never make in a store. Especially now that my bookshelves are threatening to overtake the house, Kindle editions are a guilt-free option that go a long way toward maintaining domestic harmony. And that’s always a good thing.