Skip to primary content
Skip to secondary content
James Scott Bell
@jamesscottbell
Last week I had the honor of being the first author to final for an International Thriller Writers Award for a self-published work, One More Lie. ITW has been forward thinking in this new era, recognizing that the future is now and a thrilling story works no matter what the delivery system.
Although I didn’t take home the top prize, it was cool to be there (along with former blogmate John Gilstrap and others) and to be confirmed in this: it’s no longer an either/or publishing world, but a both/and and why-the-heck not? 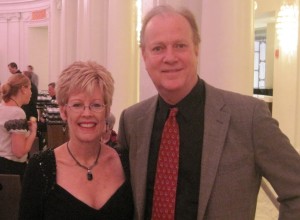 Mrs. B and I had our usual wonderful time in New York, where I used to pound the boards as an actor. We had dinner with my agent, Donald Maass, at a nice bistro in the Meatpacking District (really hopping these days). We talked about the craft, natch, and something Don said in passing I had to write down (this happens a lot when you listen to The Man): “Backstory is not just for plot motivation, but deep character need.”
Chew on that one for awhile.
Dear wife and I saw a hysterical Broadway show, One Man, Two Guvnors.It’s hard to describe, but suffice to say the Tony Award winning lead, James Corden, is a comedic genius.
Also saw about two hours of the amazing 24-hour film on time called The Clock.
And I got to teach at CraftFest. The room was packed! Then I realized Lee Child was teaching right after me….still, a good time was had by all.
The most interesting talk at the Fest, for me at least, came from Jamie Raab, senior vice president and publisher at Grand Central Publishing. Some notes:
Ms. Raab stated that, of course, the industry is in flux. Mass market paperbacks, for instance, are in steep decline as a category. Ms. Raab did not see any way for that format to come back to what it once was. Just what this means to the industry is not known at this time (like so many other things!)
Hardcovers, too, are heading south, simply because they have to be priced too high to cover costs of production. But, as we all know, prices are trending downward as more and more ebooks become available at consumer-friendly price points. Consumers are getting used to certain levels, and there’s no way to fight that. Consumers are co-regents with content in the marketplace.
Ms. Raab spoke about the thrillers she’s read over the years that were “game changers.” Not merely good books or great reads, but books that did something so amazingly original or compelling they actually changed the way the books after them were done.
The titles she mentioned:
Marathon Man by William Goldman
Presumed Innocent by Scott Turow
The Firm by John Grisham
Rosemary’s Baby by Ira Levin
Absolute Power by David Baldacci
The Silence of the Lambs by Thomas Harris
Each of these titles did something “more.” Marathon Man, for example, had one utterly unforgettable scene. You all know what it is. If you’ve ever been to the dentist, that is.
Absolute Power begins with another unforgettable moment, a burglar hiding himself in a swanky house, witnesses the murder of a young woman by the President of the United States. That scene, and book, changed the course of political thrillers.
So here is what you ought to consider as you write: what are you doing that is “more” than what you’ve read before? What is it about the idea, the scenes, the characters, the plot itself that comes from the deepest part of you?
Here’s the nice thing, as Leonard Bishop once put it. “If you boldly risk writing a novel that might be acclaimed as great, and fail, you could succeed in writing a book that is splendid.”
Splendid isn’t a bad place to be.
Are you reaching for “more” in your writing?