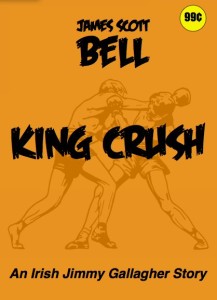 Today’s post is brought to you by my new boxing story, “King Crush,” now available for 99¢ exclusively for Kindle. And, as a special inducement, for a limited time the first story, “Iron Hands,” is available FREE.
Today I have a question: What do you like to see in a series character? The same “feel” over and over, or deepening and changing?
There are two schools of thought on this.
Lee Child once remarked that he loves Dom Perignon champagne and wants each bottle to be the same. He’s not looking for a different taste each time out. So it is with his Jack Reacher novels. And millions of fans are tracking right along with him.
There are other enduring series where the character remains roughly static. Phillip Marlowe didn’t change all that much until The Long Goodbye. James Bond? Not a whole lot of change going on inside 007.
At the other end of the spectrum are those characters who undergo significant transformation as the series moves along. The best contemporary example of this is, IMO, the Harry Bosch series by Michael Connelly. What he’s done with Bosch from book to book is nothing short of astonishing.
Lawrence Block’s Matthew Scudder was traipsing along as a pretty standard PI until Block made a conscious decision to kick it up a notch. He did that with Eight Million Ways to Die, a book that knocked me out. Here we have Scudder not just on a new case, but also battling his alcoholism and the existential angst of life in New York City in the early 1980s. By going deeper Block created one of the classics of the genre.
In my Mallory Caine, Zombie-at-Law series (written as K. Bennett) I have a lead character who is a zombie hungering (you’ll pardon the phrase) for change. She doesn’t want to be what she is. The just released Book 2,The Year of Eating Dangerously, begins with Mallory in the hills looking down at a motorcycle gang and thinking, Lunch.And then reflecting on her damaged soul.
Book 3, due out later this year, begins with Mallory at a ZA meeting—Zombies Anonymous. She is trying to stay off human flesh (substituting calves’ brains) but it’s not easy. And I say without hesitation that I was inspired by the above mentioned Eight Million Ways to Die.
So here’s my series about boxer Irish Jimmy Gallagher. These are short stories, and I’m going for “revealing” more of Jimmy in each one. “Iron Hands” was the intro, giving us Jimmy’s world and basic personality. Now comes “King Crush.”
The new story takes place in 1955 and revolves around an old carnival attraction they used to have in America, the carny fighter who would take on locals. If the locals stayed with him long enough, they might earn back their five bucks and some more besides. But these carny pugs knew all the dirty tricks, and it was usually the hayseeds who ended up on the canvas.
Jimmy just wants to have a good time at the carnival with his girl, Ruby, and his bulldog, Steve. He’s not looking for trouble. But sometimes trouble finds Jimmy Gallagher.
I started writing these stories because there’s something in me that wants to know Jimmy Gallagher, what makes him tick. And that’s my preference as a writer and a reader of series. I want to go a little deeper each time.
So who is your favorite series character? Is this character basically the same from book to book? Or is there significant change going on?
If you’re writing a series, do you have a plan for the development of your character over time? Or is it more a book-to-book thing?
James Scott Bell
Twitter.com/jamesscottbell 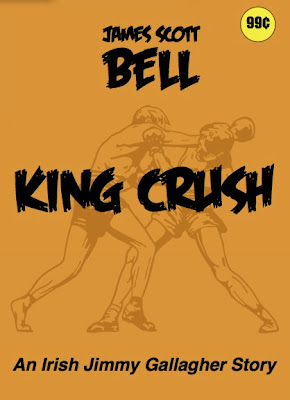 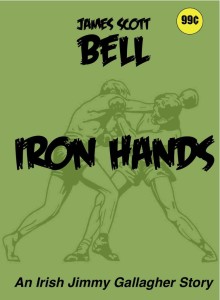 Available for 99¢ exclusively on Kindle.