I used to be fairly addicted to James Lipton’s show Inside the Actor’s Studio, during which he would conduct incisive interviews with famous actors. It used to come on every Sunday night, but got shuffled in the schedule a while ago, and I’ve not been able to catch up with it again. The stories of creative courage, and of success in the face of repeated rejection inspired me. I think the show was inspiring to anyone of a creative bent. 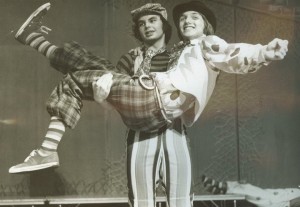 Back in high school, I used to toy with the idea of becoming an actor—having been a star in our production of Godspell and learning to love the sound of applause. (I’m the holder in the picture, not the holdee) Then I was cast as George in the school’s production of Our Town, and I realized that I was far too self-conscious to strip away the social armor of adolescence and show real emotion to a room full of strangers. I went through the motions because that was what I’d signed on to do, but acting was not for me.


I chose instead to do my emoting on the page, where I have the luxury of limitless attempts to get it exactly the way I want before I show it to anyone. It’s part of my nature as a control freak.


While the up-by-the-bootstraps stories were inspiring, I also took great interest in the guests’ discussion of method acting, in which actors insert themselves emotionally into their character’s reality, and then leverage their own emotional and sensory memory to deliver a convincing performance. The Method, as it is called, contrasts with “classical” acting, in which actors merely simulate their characters’ emotions through external factors such as voice and facial expression. (Thanks to Wikipedia for the definitions.)


We talk a lot about point of view here at The Killzone, and for me, there’s a lot to be learned about POV by what little I understand about The Method. I’ve never articulated it as such, but when I write any given scene, I am in the emotional space of the character to whom the scene belongs. I see and hear what they see and hear. When I’m truly in the zone, writing a scene is merely a matter of reporting what I see and what I feel. I can be that much in the moment.


To the degree that I have a gift for writing (how’s that for a pretentious phrase?), I think that gift lies in my ability to bring readers into my characters’ heads. I’d been writing that way for long before I watched my first episode of Inside the Actor’s Studio and learned about The Method, but the more I think about it, the more I believe that the processes are similar.


As I write this, I realize that there’s also a writing analogy to the classical style of acting. It manifests itself in the writing styles of many of the titans of the mystery genre, starting with the Great Agatha. While I enjoy her stories, I never feel terribly bonded to her characters emotionally. I admire them for their puzzle-solving abilities, but I don’t feel that I know them personally. (Having written this paragraph, why do I feel like I should be digging a bunker to hide in?) As a result, those stories feel dated to me.


What about you, fellow Killzoners? Do you think there’s a link between acting and writing?

The writing process fascinates me. Reading Joe Moore’s excellent post about the Nemo family got me to thinking how I would answer the question about motivating characters. Even as I write this, I’m still not sure. Fact is, I’ve never thought of the process that way. Interview my characters? I can’t imagine doing that. As I’ve posted before in this space, my characters have the annoying habit of staring back at me until I tell them what to do.

For me, I think, plot is character is motivation is drama. The various elements of storytelling are so interwoven and interdependent that I don’t know how to break them into their separate component parts. When a character’s child is stolen, the motivations are inevitably cast. The kidnapped child is motivated to survive and/or get away. The parent is motivated to get him back. The kidnapper is motivated to see his plan through to the end. Maybe it would be more nuanced for me if I wrote love stories; but as a thriller writer the whole motivation thing has never been a problem for me.

Sometimes I think the best advice we can give to struggling new writers is to think less and imagine more. Given the set of circumstances you’ve conjured, put yourself in your character’s position and start pretending. It was easy when we were kids, after all, before we attended creative writing classes and people started putting labels on the things that came naturally. When I was a boy and I played with my friends, the non-sports games were always of the role play variety, and nearly always involved imagined gunplay. (I cleared the neighborhood of marauding Apaches when I was very young, and then kept the Nazi threat at bay as I approached adolescence.) But here’s the thing: I became the character I was pretending to be. My bike was a motorcycle, and the pine cones were grenades.

When I started writing stories in elementary school, that reality transference continued. The reality of the imagined world trumped the reality of my actual surroundings. It still happens to me when I’m really in the zone—it’s the great thrill of writing. I don’t have to think about motivating my characters because all I have to do is report on what I’m seeing, hearing and feeling through their senses.

Being a big fan of Inside the Actor’s Studio, I’ve often thought that the Method, as described by the guests on that show, has a lot in common with my writing process. Once I create a premise that feels real, I don the emotional garb of the character from whose head I’m writing, and I embark on a great pretend.