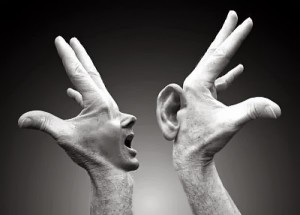 In Chapter 9 of Conflict & Suspense I write about Inner Conflict. I define it this way: Think of this interior clash as being an argument between two sides, raging inside the character. Like the little angel and the little devil that sit on opposite shoulders in a cartoon, these sides vie for supremacy. For inner conflict to work, however, each side must have some serious juice to it. I had a chuckle re-reading that, which chuckle I must now explain.

Last week I was in Minneapolis for the annual Story Masters Conference. Donald Maass, Christopher Vogler and your humble correspondent spent four solid days with a roomful of writers, digging deeply into this craft we all love.

I enjoy Story Masters each year, not just because I get to hang out with Don and Chris and a whole bunch of motivated storytellers, but also because I pick up something valuable each time myself.

This year, during Chris’s talk on The Hero’s Journey, I was struck by something he said about how we feel stories. This came to him, he explained, during his years as a reader for the studios. He noticed that strong emotions hit him physically, at points in his body. There were different points for different emotions.

He connected this to the concept of Chakra. What happens is that certain emotions immediately fuel a secretion of chemicals in areas of the body. Chris realized the that best scripts, the rare ones that really knocked him out, were hitting him in more than one place.

With a playful gleam in his eye, Chris announced to the class what he calls “Vogler’s Rule”—

If two or more organs of your body are not secreting fluids, your story is no good.

This got a laugh from the crowd. Thus, my reference above to the serious juiceof inner conflict is apt.

As Chris’s session went on, I started thinking more about this idea. What Chris suggests is that when our “fluid centers” are activated, we are not being rational. Thus, a great form, perhaps the best form of inner conflict is when the character’s rational mind is being assaulted by a strong emotional, er, fluid.

How human that is, isn’t it? Think of the traveling salesman. He has a wife and children he loves. But at the bar in Wichita he sees a cocktail waitress whose sultry walk and Lauren Bacall voice unleash inside him an immediate animal lust. The fight is between his mind, which reminds him of all he has at home, and his body, which doesn’t care what he thinks at all.

Or what about a sheriff with a high and honorable sense of duty? That’s his mind. He’s thought this through his whole career, lived by that code. But then killers come after him, and he cannot gather a posse to stop them, and his body starts feeding him fear—of death, of losing the woman he’s just married, of perhaps being a coward. This is the inner conflict that throbs throughout the entire movie High Noon. It’s head versus body.

I was reminded of something Iago, who has all the best lines in Othello, says to Roderigo:

If the balance of our lives had not one scale of reason to poise another of sensuality, the blood and baseness of our natures would conduct us to most prepost’rous conclusions. But we have reason to cool our raging motions, our carnal stings, our unbitted lusts.

Shakespeare was describing this very thing, the battle between reason (the mind) and all our bodily “raging motions.”

It’s such a great way to think about inner conflict, because you can create this tension at any time in your novel. Just arrange for something to strike your character on a strong emotional level, and put that at odds with something he strongly believes.

Thus, I came up with “Bell’s Corollary to Vogler’s Rule” as it relates to inner conflict:

What about you? Are your characters conflicted enough?