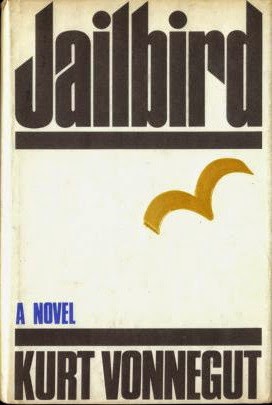 When considering the dire financial consequences of pursuing a career in fiction — and unfortunately this topic comes to mind every time I look at my bank statements — I sometimes think of the short story “Asleep at the Switch” by the great Kurt Vonnegut. (The story appears as a preface to his 1979 novel Jailbird, and it’s actually credited to Kilgore Trout, Vonnegut’s eccentric alter ego, but never mind all that.) This little tale illuminates the nature of capitalism better than any economics textbook can.
I can’t find my copy of Jailbird now, so I’ll have to tell the story from memory. Albert Einstein goes to heaven and is met at the pearly gates not by St. Peter but by a team of divine accountants. Before being allowed into Paradise, the recently deceased have to sit down with the accountants, who review the financial history of the departed and point out all the business opportunities that God had placed before them during their lifetimes. For example, a teenage gangster who’d been killed in a knife fight is told that every morning of his short life he’d walked past a vacant lot in which a diamond ring was hidden among the garbage. If he’d just taken the time to scour the lot for valuables he would’ve found the ring and earned enough money from its sale to move his family out of their dangerous neighborhood. “So you shouldn’t blame God for your misfortune,” scolds the heavenly accountant. “He gave you the chance to be successful, to make millions. But where were you? You were asleep at the switch.”
Albert Einstein gets the same treatment from the accountants. One of them tells the physicist that he should’ve bought stock in uranium-mining companies as soon as he figured out the secret of the atomic bomb. “You could’ve made billions!” the accountant yells. “But where were you? You were asleep at the switch!” Einstein isn’t perturbed by this scolding — he has no interest in money. All he cares about are physics and his beloved violin. But he notices that the heavenly audits are really upsetting the other poor souls in Paradise. They writhe with agonizing regret when they learn about all their missed opportunities.
So Einstein writes a letter to God. He politely recommends that the Almighty stop the audits because they’re causing so much pain. And because he’s Einstein, he points out a logical problem with the reasoning of the accountants. He notes that if everyone on Earth took advantage of all their financial opportunities and made billions of dollars, then the world would be flooded with so much money that it would lose all its value.
And here is God’s reply to Einstein’s letter: “Stop complaining, or I’ll take away your violin.”
Vonnegut’s story touches a nerve. Doesn’t our society seem to judge everyone based on how much money he or she makes? And don’t we often judge ourselves using the same standard? But it’s a terrible standard to use, because the game is rigged. Everyone is encouraged to dream of becoming a billionaire, and yet the system would collapse if everyone actually got rich.
I think the same lesson applies to writers. We all want to be bestselling authors, but perhaps that’s an unrealistic expectation. Do you really need hundreds of thousands of readers to call yourself a successful writer? Can’t you be happy with just 5,000 or 10,000 readers? That’s still a lot of people.
Anyway, that’s my moment of Zen for today. I’m trying to lessen my suffering by reining in my desires. But I still feel bad when I look at my bank account.
******
On a happier note, I discovered a way to connect to new readers through the Huffington Post. The website makes it easy to post essays on the site. I contributed a piece that was mostly about science but a little about fiction. You can read it here.