In 1996 I was offered a five-book contract by the Christian publisher Broadman & Holman.
I had proposed bringing the legal thriller genre to the inspirational market, which was starting to explode in the fiction category.
The contract was generous for an unknown scribe, though I did happen to be a slightly-known lawyer. I was the publisher of a legal digest on California search and seizure law (still am, in fact) and in that capacity had made an appearance on national TV during the O. J. Simpson preliminary hearing in 1994. That’s not really something to boast about, as just about every criminal lawyer in America made some sort of TV appearance during the Simpson trial. (It did turn out that the judge in the prelim relied on a case the lawyers missed, and may have found said case in my digest. Always happy to help a judge).
Back to the novels for B&H. The second book I did for them was Final Witness. Now, through the wonder of digital publishing, I am able to bring it back into circulation. 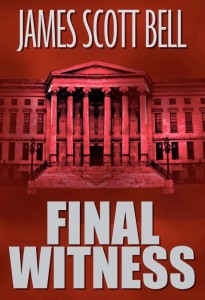 A cold-blooded killer is destroying all who oppose him. Will there be a final witness to the truth?
Young, idealistic law clerk Rachel Ybarra has just been handed a career-making opportunity––helping in the prosecution of an infamous leader of the Russian Mafia. But when the star witness turns up dead, Rachel discovers the case is not merely a battle for the truth––it’s a battle for her life.
The book is available until Friday for a special launch price of $2.99. You can find it on:
AMAZON US
AMAZON UK
BARNES & NOBLE
INTERNATION AMAZON STORES
At the time I started researching Final Witness I had a law school classmate who worked as an Assistant United States Attorney in downtown L.A. He provided me access to the office and his fellow lawyers, and technical assistance on the nuances of federal prosecutions. The result was a book I remain quite proud of.
After it came out, and completely unbeknownst to me, a new award came along specifically for Christian fiction. The Christy Award (named after Catherine Marshall’s famous novel), had several categories. I got a call from my editor one day to tell me that Final Witness was a finalist in Suspense.
There was a big banquet at the Christian Booksellers Association convention in 2000. Final Witness took home the prize, for which I’ve always been grateful. But that’s only part of the story.
Awards are nice to win, we all know that. It’s not so nice to lose, even though you’re a finalist. You may strain to be happy that you’ve been nominated, but the tight smiles at the Academy Awards each year show just how tough that is to pull off in real life.
The next year, my follow-up novel, Blind Justice, was also a Christy finalist. This time I didn’t win. And I was a fool for getting so wrapped up in the contest. I could excuse that by saying, “Well, we’re all human, even recovering lawyers.”
But then I hearken to what Kate Hepburn says to Bogart in The African Queen: “Nature, Mr. Allnut, is what we are put in this world to rise above.” That includes human nature. We show it in all its contradictions in our fiction. But as people in this world we need to learn to keep our heads when all about us are losing theirs (thank you, Mr. Kipling).
So don’t put too much stock in awards, accolades, lists, recognitions. Enjoy them if they come, but don’t stand at the window, nose pressed, lusting after one. You won’t get much sleep that way. And your writing will probably suffer.
The best antidote for awards anxiety is this: go deeper into your work-in-progress. Get involved in your characters’ lives. Give them the attention. Put them through the emotional trauma. Do that and you just may get the kudos that really matter—from readers.
So what are your thoughts on awards in the arts?
0