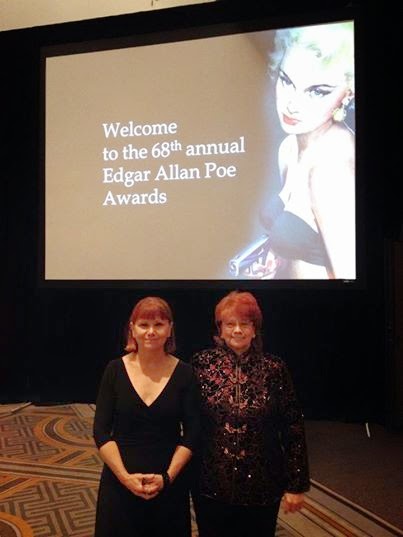 A friend of mine got some pretty good news this week. He won the Edgar for Best Novel.

William Kent Kreuger is his name. The book is Ordinary Grace and there’s nothing ordinary about it. Now I didn’t read all the best novel nominees this year, but I can vouch for this book and for Kent himself. He’s one of the good guys. He’s paid his dues, is generous to other writers, and has kept his Cork series going at a high level for fourteen books now. (Not an easy feat!)

So last Thursday night, I was delighted to see him hugging that ugly little porcelain statue.

I’ve had a front row seat to the Edgars for seven years now. My sister Kelly and I are the banquet chairs. That’s us in the pic above just before the night got started. We produce the “show” that is sometimes called the Oscars of the crime world. It’s a great gig because Kelly gets to make movies for the night, I get to make the Powerpoint and work with great writers to produce the annual. It’s even fun to help MWA’s Margery Flax set things up. Can I share some backstage snapshots?

Here’s how Eddie arrives at the Grand Hyatt, rather unceremoniously: 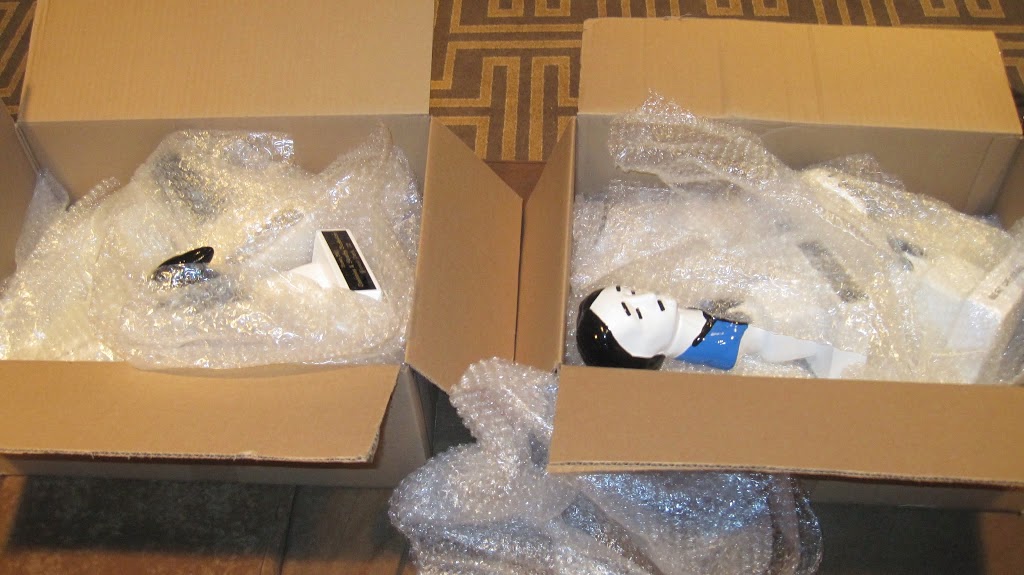 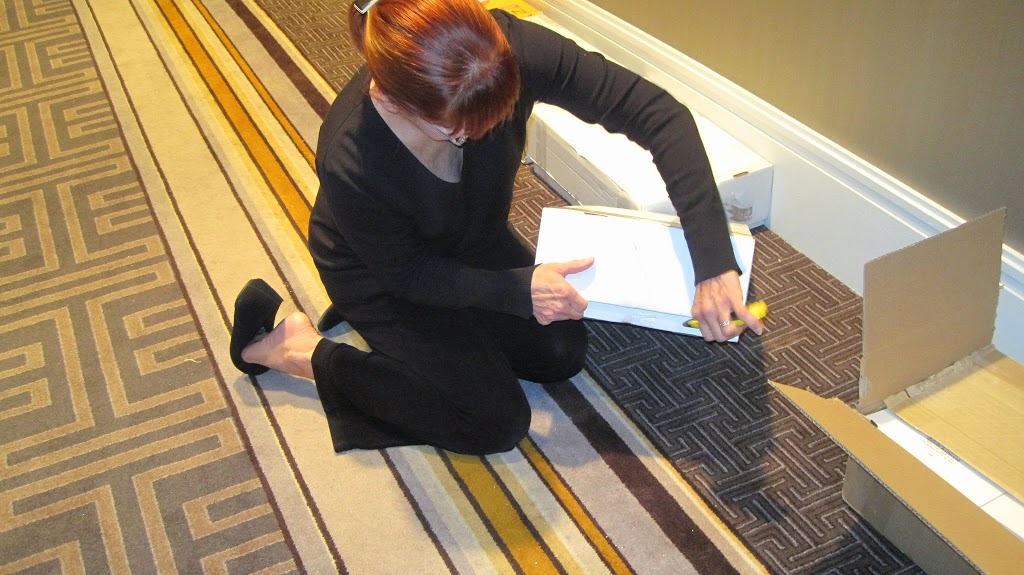 And Kelly helping Margery set up the registration table. 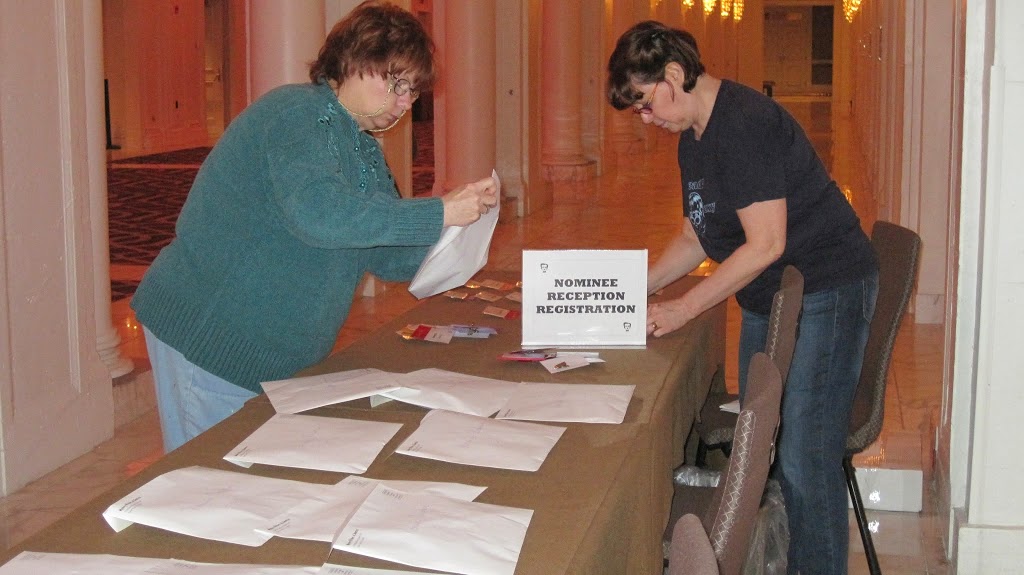 I can hear you sighing. Ugh…awards. Who cares?

True, there are some great and successful writers in our genre who never won an Edgar. Or an ITW Thriller Award, or Shamus or Anthony or Dilys. Many really good books are overlooked every year. Some publishers neglect to even enter their authors’ books. And except for the Mary Higgins Clark Award and the Agatha Award, there is a bias against traditionals and cozies. But after working the Edgars for seven years now, come banquet time it is fun to see folks who slave over their Macs in sweatpants put on tux and gown, put aside their cynicism, and get their moment in the sun.

But can an award change your life?

My sister Kelly and I got an Edgar nomination for our second book Dead of Winter. We were pretty naive — hell, stupid — about the book biz in those days. We didn’t even understand what the Edgar was, to be honest.  I do remember exactly what I was doing when I got the news. The Bucs were beating up on the Raiders so everyone at our Super Bowl party was three sheets to the wind, including me. The phone rang and I took it outside so I could hear. When the person delivered the news, I screamed. My husband came running outside.

“What the hell is wrong?” he yelled.
“We’re an Edgar nominee!” I yelled back.
“I thought the cat drowned in the pool. What’s an Edgar?”

Things got better fast. First, the book jumped a couple notches on Amazon. It was probably from 1,4456,957 to 56,789, but hey, you take what you can get. We got some late reviews from folks who had ignored it the first time. (Paperback originals don’t register on most reviewer radar screens).

Then came the Edgar banquet. We bought new dresses and went to New York. At the hotel bar, we sat in a quiet circle: Kelly, her son Robert, my husband Daniel and our agent. We allowed ourselves one drink because if we did win, we didn’t want to make asses of ourselves up there.

Inside the cavernous dining room, we sat at our publisher’s table, ogling and pointing. There goes Harlan. Was that T. Jefferson Parker? Laura Lippman is taller than she looks in her pictures. Look at the red dress Mary Higgins Clark is wearing. Omigod, that’s Edie Falco over there!

Everything was a blur. Then they started announcing the winners. It is excruciating sitting through all the categories knowing your moment is coming. The sound starts rushing in your ears and your vision grows dim. You’re stone cold sober but you feel like you’re going to pass out.

I felt my husband grab my hand.

I applauded the winner then grabbed the wine bottle and poured myself a tall one. The next day, we went home and I went back to chapter 12 of what was to become our fourth book, Thicker Than Water.

I wouldn’t be honest if I didn’t tell you the truth: Losing bites. My good friend Reed Farrel Coleman has been nominated three times in three different categories. He was up this year for Best Short Story. He lost.  He says he is now chasing Jeffrey Deaver’s record who has lost seven times.

It is now ten books later for us. There have been dark days when I couldn’t put two decent sentences together and darker nights when I have fretted that the world was finally going to discover that I have no talent and am a complete fraud. Writing is a lonely affair. It’s a cliche but a true cliche. And the egos of most writers I know are swiss-cheesed with doubt. So yes, I think getting an award can change your life. Hell, a nomination can change your life.

Not because it’s some outer confirmation like a bump in sales, or a translation into a better contract or a bigger publisher. It is because it is an inner validation — that something you did, something you created out of the ether of your imagination and the sweat of your faith — is real. And your peers know and honor that.