A few years ago, I was fortunate to read a copy of Reece Hirsch’s thriller THE INSIDER before it found a home. Now, I usually don’t read unpublished manuscripts, because my agent warned me against it. But I knew Reece from a critique group, so I made an exception. And boy, am I glad I did. THE INSIDER is a heck of a debut, everything a good thriller should be. I recommend picking up a copy before they sell out, you won’t regret it. -Michelle

My debut legal thriller The Insider was published by Berkley Books this month as a mass-market paperback, marking the end of the first phase of my education in how to, and how not to, write a thriller. While I am but a humble newbie writer, I learned a few things in my six-year struggle to complete a novel and get it published. I make no claims to the wisdom and experience of your regular Kill Zone authors – they’ve all written many more books than I have. But here are a few lessons that I think I’ve learned, most of them the hard way. 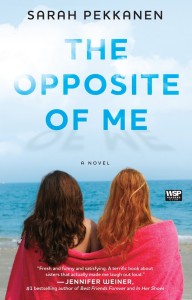 I met Sarah Pekkanen when she alerted me she was mentioning my book, Plot & Structure, in a radio essay for “All Things Considered” on National Public Radio. I listened in, and Sarah was quite generous in placing me in the heady company of Stephen King and my own agent, Donald Maass, both of whom have superb books on the craft. She explained how each of the books helped her along as she wrote her novel, The Opposite of Me, which has just been released under Simon & Schuster’s imprint Washington Square Press.

The Opposite of Me is getting great reviews and blurbs. The genre is humorous, contemporary fiction. Yet Sarah has kindly consented to wander into the Kill Zone. A lot of writers who are seeking publication read this blog, and I wanted to ask Sarah about her whole experience. Here’s the interview. Enjoy.

JSB: Sarah, you had an extensive journalism background before you started writing your novel. Do you see a connection between that kind of writing and writing fiction?

SP: Yes and no. I learned to write on deadline, which is an incredibly valuable skill. Knowing that a newspaper was holding an empty space for my story – and that I’d be out of a job if I didn’t consistently fill it – meant I couldn’t agonize over every word or succumb to crippling self-doubt. I was lucky in that I moved around to different beats and different cities, covering a wide range of stories – interviews with testy politicians, man-on-the-street reactions to the day’s breaking news, and long, rich features. But after my kids were born and I left newspapers to try my hand at fiction, I realized I needed to un-learn some of my habits. Instead of trying to condense a story to fit the space constraints of a newspaper, I needed to find places to expand it. I also had to quiet the cynical part of my brain that constantly questioned whether something in my fiction was realistic, and encourage my imagination to fly.

JSB: The Opposite of Me is your first novel. And it sold. This is not the usual path for new writers. What do you think made the difference in this case?

SP: Actually, I started writing books when I was nine or ten years old, and I used to confidently send them off to publishers and wait for the day when I could stroll into a bookstore and see one of my creations – like “The Lost Gold” or “Miscellaneous Tales and Poems” — on the shelves. After I left my reporting job to stay at home with my young sons, I did write a novel that didn’t sell. But it got me a literary agent. So, technically The Opposite of Me isn’t my first book. But here’s what made a difference (and Jim I hope you don’t edit this part out!). I found a copy of Plot & Structure and my writing improved immensely. Something about the simple, straightforward advice illuminated what I’d been doing wrong in my manuscripts. I wrote The Opposite of Me in nine months, and it was sold at auction a week after my agent submitted it. And I continue to pore over Plot & Structure as I write my second novel.

JSB: How about literary influences?

SP: I read extensively within my genre – commercial women’s fiction – and I also adore mystery. I love writers like Harlan Coben and Jennifer Weiner who weave humor through books with serious themes, and I tried to do that in The Opposite of Me. One book that really electrified me is In Cold Blood. When I realized that Truman Capote created a book that could stand as masterful piece of fiction – and yet every word was true – I began trying to recreate that technique on a much smaller scale in my newspaper stories. I wrote a number of narratives for papers like The Baltimore Sun, including a piece on a police officer’s accidental death at the hands of a fellow officer, and a story about a student at Columbine High School who was transformed from the class clown into a hero who saved lives during the shootings.

JSB: Do you have a typical writing schedule?

SP: I wrote The Opposite of Me while my two oldest boys were in school and I was pregnant with my third – so I had lovely long stretches of quiet time in which to walk the dog, brew a pot of tea, and sink into my manuscript. Now things are much more hectic, so I’ve had to learn to write in little snatches of time as well as big spaces. I’m lucky in that I can usually score a babysitter, and my parents live five minutes away and are always willing to help. I try to write in the mornings for a bit after the big boys go to school, and when the baby is napping. But with this book, I’ve had to fit writing in around my life rather than the other way around – which isn’t such a bad thing.

JSB: Where are you on your next book?

SP: I’ve already turned it in to my agent, and now I’m tweaking the final draft a bit based on her suggestions. I was advised to begin my second book before my debut came out, and I’m so glad I listened to that advice! Promoting a new book takes an enormous amount of time, and I’m in awe of authors who manage to juggle both jobs and do them well. If I hadn’t started my second book last year, I’d have a lot of trouble finding the time to sit down for the big think sessions it takes me to lay out the bare bones of a plot.

JSB: Here’s one that’s pretty common for published writers, but since you’ve just hit the shelves your take will be particularly fresh: What’s the most important advice you have for new writers out there wanting to break in?

SP: Set a goal – whether it be a paragraph a day or five pages – and figure out how to stick to it. Writing is like exercise: You need to do it nearly every day to get results. Well, at least that’s what I’ve heard. I don’t exactly have the exercise thing mastered yet.

You can read or listen to Sarah’s original NPR essay here.