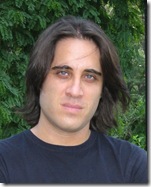 The Kill Zone is thrilled to welcome author Jason Starr as our guest blogger today. Jason’s book THE FOLLOWER was just re-released as a mass market paperback, and I can attest that it’s a dark, funny story that absolutely everyone should read. Bret Easton Ellis said, “The Follower is Jason Starr’s masterpiece,” and The New York Times described it as “Extremely chilling.” Think of it as a dating “how not-to.”

Our TV broke last week. It was an LCD set—an old model—and when the inverters go, that’s it, the set’s dead. We have a new TV now with one of the best home music systems, but for several days we were forced to go TV-less. I know, the horror, the horror, right?

Actually, going without a TV was a bit of a shock. My family and I live in a fairly small Manhattan apartment and the sudden quiet was startling. Sudden 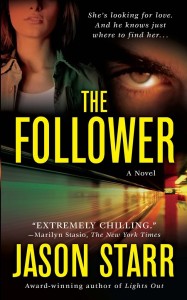 ly I felt like I was back in the 1800’s, living in the Little House on the Prairie, and I had to entertain the family at night with my fiddle. I was able to read more, which was great, but it didn’t really fill the void.

I mainly watch sports and movies on TV, and cable series such as Entourage, Dexter, and Californication. Not so-long ago there was a big stigma among people, especially writers, about admitting to television watching at all. At parties, if the subject of television came up a writer would say proudly, “I’m too busy to watch TV.” Some went further and claimed, “I don’t watch TV at all.” Others—the really busy people—would boast, “I got rid of my TV.”

I always suspected that people who claimed they didn’t watch TV were closet TV- aholics. They probably sat with their asses glued to their couches four hours a night, watching the entire lineup of the dumbest sitcoms.

But something happened, I think around the time The Sopranos got popular. Suddenly it became socially acceptable to admit to TV watching, and a big stigma to not watch TV. If you didn’t watch The Sopranos, you were considered to be some kind of freak, and if you didn’t watch the finale–fuggedaboutit. I think there’s no doubt that the quality of television in general has improved greatly over the years, but there has been a change in our attitudes toward TV as well.

Now being TV-literate, especially cable TV-literate, is much more socially acceptable, even vital. I actually feel

sorry for the writers who don’t watch TV because at parties and mystery conferences they’ll inevitably hear: “What, you haven’t seen every episode of The Wire? Oh my God, what’s wrong with you?…“What, you don’t watch Dexter? Really? You have no idea what you’re missing.”….“What, you’ve never seen Californication? You’re kidding me? Really?”….“You’ve never heard of The Shield?”

I’ve seen some television-deprived writers embellish their TV watching, smiling vaguely and nodding a lot, not wanting to feel left out when people start discussing the latest shows. That’s right, writers have now come full circle and they actually exaggerate the amount of television they watch.

So I’m wondering, how much television do you watch? And do you find that lately it’s more socially acceptable to admit it?

JASON STARR is the Barry and Anthony Award-winning nine crime novels which have been published in ten languages. His latest thriller from St. Martin’s Press, THE FOLLOWER, is on-sale this week in a new mass market paperback edition. Visit www.jasonstarr.com and sign up for Jason Starr’s newsletter for a chance to win a 50-dollar Amazon gift certificate, and other exciting prizes. Newsletter subscribers will also be eligible to win free advance copies of Jason Starr’s next thriller PANIC ATTACK, which will be on-sale in August, 2009.