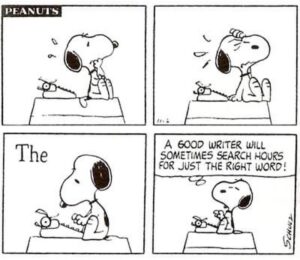 “When I read, I notice with pleasure when an author has chosen a particular word…for the picture it will convey to the reader.”―Ruth Bader Ginsburg

The older I get, the more words fail me. This is a common ailment, I realize, but that’s cold comfort. What’s worse, there’s no logic to these lapses. I can sing all four verses of the theme song from The Patty Duke Show. But “thing” has now become my go-to noun in daily life — as in when I asked the husband to hand me “that thing over there” so I could change the channel on the TV.

You’d think that, as a writer, I’d be used to this. Not being able to claw up the right word from the morass of our memory is just normal for us, right? It’s part of the torture of our creative process. I’m telling you, crime dogs, this doesn’t get easier with age.

I’m judging a contest right now for a writer’s conference. The entries range from derivative to really delightful. What separates the standouts from the pack is not a matter of just plot and character or mastery of craft. Sometimes it is coming down to something as “small” as word choices. There is nothing better, as the late justice said, than to come across a phrase or sentence that is so striking and original, that you pause in your reading to savor it.

As a writer, when you hit upon just the right word, your sentences and scenes take on a vibrancy and alive-ness. The right word, phrase, metaphor, has a magical power to instantly connect with a reader, making them go “Yes! I know exactly how that feels!”

When you settle for the merely adequate word, your story becomes mundane and bloodless.

Look at these lovelies:

Ray Bradbury in Fahrenheit 451 describing the “beauty” of the pages of a book being burned: “Each becomes a black butterfly.”

John LeCarre in The Spy Who Came In From The Cold describing torture: “The pain just increases like a violinist going up the E string. You think it can’t get any higher and it does–the pain’s like that, it rises and rises.”

Does it give you, as a writer, any comfort to know that all writers struggle with this? It helps me. It’s just one more thing we have to worry about as we move through our stories, trying to keep all the pie plates spinning.

Gustave Flaubert was tortured by his quest for le bon mot, as he lamented in a letter to Guy de Maupassant:

Whatever you want to say, there is only one word that will express it, one verb to make it move, one adjective to qualify it. You must seek that word, that verb, that adjective, and never be satisfied with approximations, never resort to tricks, even clever ones, or to verbal pirouettes to escape the difficulty.

Well, I don’t know if this will make your trials any easier, but here are a couple things I’ve found useful to keep in mind as you struggle for the right words.

Keep word choice true to the characters background and age. Streetwise characters in a PI novel have their own jargon. Ditto the hero of a historical regency romance. Country folks speak a different vocabulary than city swells.  Nothing will yank a reader out of your story faster than ill-fitting words coming from your characters mouths or brains.

Be a good listener. We’re always saying here at TKZ that you must be a great observer of human behavior to write well. So must you be a great listener. Now, in daily life, people talk in cliches, banalities and tried metaphors. If you ever use one of these…

…I will hunt you down. You can take that to the bank. But listening to people talk gives you a good grounding by which to fashion unique character voices. Everyone on earth has their own music. It’s your job to hear each note.

Be aware of your tone. Humor demands a different vocabulary than hardboiled. The word choices you make for mystery set in the Civil War South are going to be more specific and regimented than those for a dystopian fantasy wherein you are free to invent words and phrases. (See below!)

Beware the Thesaurus. I know, I know…it is useful but it can be a dangerous crutch. If you are overly reliant on standard synonyms, your brain will never become muscular enough to come up with something truly original to your own voice.

Okay, okay, if you’re really constipated you can take a dose of Thesaurus. Sometimes just looking a list of almost-right words can free up the juices. Just be careful that you’re not so desperate that you fall for the first pretty synonym that comes along. Here’s a really fun site for word shopping:  https://onelook.com/ (Enter your word in the box but don’t hit enter; hit Related Words)

Don’t gild every word. Sometimes, “He walked into the room” does the trick. It’s usually not “a verdant swath of fescue,” it’s just “grass.”  Pick your places to punch things up and don’t overdo it because you’ll just end up looking silly. Don’t get addicted to metaphors. As Florence King said, writers who have nothing to say always strain for metaphors to say it in.

Likewise, be aware of the moment. This is a problem I’m finding with some of the entries I am judging — the writers over-describe or strain for originality when the context/situation calls for tightness, simplicity, or specificity. This is especially true in their action scenes. The tenser the moment, the simpler the writing, I say. Do you write this?

Frank reached a trembling hand into his holster and pulled out his blue-black Glock 22,, grimacing as the hulk of his would-be assassin emerged from the shadows, lit for only a second by the red reflection of a nearby neon sign. He fired the gun, blinded for a moment by the muzzle-fire, then blinked the scene back just in time to see the large man fall forward, face first, down onto the wet street.

Frank jerked out his gun, squinting to see the man in the dark alley. A second of neon throbbing on the man’s gun was enough to get off one bullet.  The man fell to the asphalt, his gun skittering into the shadows.

With this example, I cut all extraneous words to keep things moving fast. I purposely left out some things to leave room for imagination. And I tried to find the right word(s) — jerked, squinting, skittering, neon throb.

Don’t sweat it on the first draft. Sometimes, you just can’t find the word. You’re in the ballpark, but it’s not a home run. You’re sorta, kinda, just about, not far from, close to, nearly, more or less…almost there! But nothing comes. Don’t do what I often do — sit there, staring at the screen, brain in knots, paralyzed by the perfection police. PUT ANY WORD IN THERE AND MOVE ON. Believe me, the word will be there in the next draft. Or in the middle of the night.

Have fun. Don’t be afraid to make up words or use them weirdly. Now, this comes with a big caveat because you can end up looking like pretentious fool. But every once in a while, you can get away with this. I didn’t know this until I did some research, but there’s a fancy (specific!) word for this: anthimeria  It means subbing one word for another, usually a noun for a verb. “Chill” was originally a synonym noun for “cold” but has morphed into a verb meaning to relax. After Clint Eastwood gave his famous speech at the 2012 Republican National Convention, “Eastwooding” meant talking to an empty chair. Thankfully, this one didn’t catch on.  Here are a couple of good examples:

I’ve often got the kid in my mind’s eye. She’s a dolichocephalic Trachtenberg, with her daddy’s narrow face and Jesusy look. — Saul Bellow in More Die of Heartbreak.

Until then, I’d never liked petunias, their heavy stems, the peculiar spittooning sound of their name. –Kate Daniels in In the Marvelous Dimension.

You keep lyin’ when you oughta be truthin’ — Nancy Sinatra, These Boots Are Made For Walking.

I unwittingly committed anthimeria at pickleball once when I joked to a female opponent after she fired off a nasty shot: “Stop mean-girling me.” It stuck, though we don’t have an equivalent for the guys.

Okay, go forward and find the right stuff. And relax! This is supposed to fun, right? As I often try to do, I leave you with some final words of inspiration. These come from the great American bard, Frankie Goes to Hollywood:

But shoot it in the right direction
Make making it your intention-ooh yeah
Live those dreams
Scheme those schemes
Got to hit me
Hit me
Hit me with those laser beam [words.]