“In the spring, at the end of the day, you should smell like dirt.” — Margaret Atwood

It’s spring here in Tallahassee. My novel is stalled. But my tomatoes are budding, the ferns are unfurling, and in a week or two, the agapanthus will burst into flaming blue.

It’s hard to concentrate on indoor plots when the outdoor plots call.

I took up gardening only in the last couple years, and now it sustains me in my writing life. I’m not alone in this obsession. Many famous writers were keen gardeners or were heavily inspired by plants and flowers. We writers are, by nature, observers of life. We eavesdrop on conversation, we scrutinize human actions. You can’t write unless you watch, very carefully. As writers you need tools, tenacity, patience, and a touch of faith. So it is with gardening.

Plants and flowers, like human beings, are understood only by moving among them and quietly, slowly, observing them. Every day, religiously, I go out and see how things are going in the garden. Are the herbs flourishing? Do the roses need pruning? Should I move the azaleas to the north side of the house so they bloom better? Every day, I open the laptop and review the landscape of the work in progress. Does this character need more sun? Should I prune this description more? Should I move this scene to a different location? And damn, how did all those weedy adverbs get in there?

If you turn your back for just one day, both your garden and novel go to hell.

It makes me feel good to know so many writers find solace in nature. Here’s Chekov writing to his friend in 1899: “The garden is going to be spectacular. I am planting it myself, with my own hands.”  Thomas Hardy found inspiration for his bucolic Far From the Madden Crowd while walking in his garden. Sir Walter Scott had five gardens, where he would walk every morning before beginning to write: “After breakfast I went out…the rich luxuriant green refreshing to the eye, soft to the tread, and perfume to the smell. Wandered about and looked at my plantations.”

Many famous writers were themselves avid gardeners. William Wordsworth was an early environmentalist. Gardens are prominent in the works of the Bronte sisters and Charlotte is said to have disapproved of “highly cultivated” gardens, preferring things a little on the wild side. Or as A.A. Milne said, “Weeds are flowers, too, once you get to know them.” 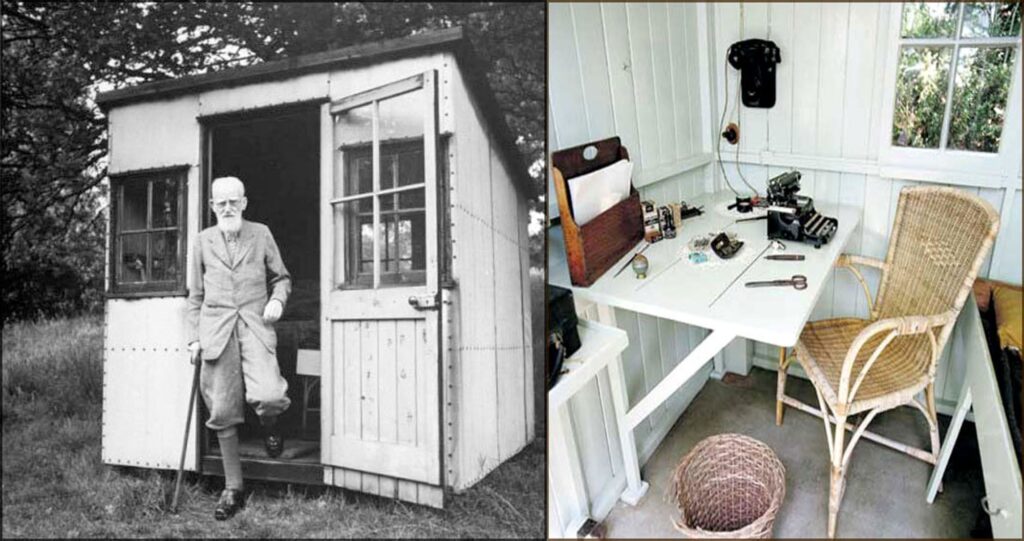 George Bernard Shaw built a “writer’s hut” in his garden. The hut rotates on a central pole axis and castors so that Shaw could always have sunshine and a change of view. His ashes are buried in the garden.

Virginia Wolfe’s first writing room was a converted shed in her garden and when she finally began to make money, she built a writing lodge in her orchard, where she wrote Mrs Dalloway, To the Lighthouse and Between the Acts’ Her garden lifted her from periods of deep depression and when she was too ill to work, she would have a chair positioned in her bedroom so she could see the garden. In a letter to a friend, she wrote: “I sleep and dress in full view of the garden.”

Edith Wharton cultivated a lush garden at her Massachusetts home and retreated there to avoid the swells at Newport. She was a serious student of landscaping and wrote a book Italian Villas and Their Gardens. She said of her gardening: “I am amazed at the success of my efforts. Decidedly I am a better landscape gardener than novelist and this place, every line of which is my own work, far surpasses The House of Mirth…”

In her lifetime, Emily Dickinson, born into a family of horticulturalists, was better known as a gardener than a poet. She became a recluse and her world narrowed to her home and gardens. When her sister discovered Dickinson’s secret trove of 1,800 poems after her death, her love of gardening was obvious:  Over a third of her poems rely on images drawn from her garden and the woods where she walked with her dog Carlo, hunting for wildflowers.

I so get that one. I consider growing my own lettuce (three varieties!) every bit as an achievement as my books.

So what have I learned from being out among my plants every day? 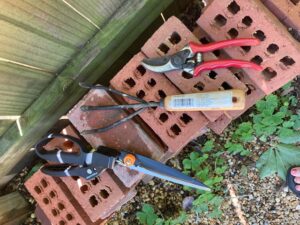 You need good tools. When I first started gardening, I bought cheapo shears and a junky plastic rake. It didn’t take long to figure out that without the basics of garden craft, nothing was going to grow, and what attempts I did make were going to be twice as hard. Oh, and you have to keep your tools sharp. (ie. never stop learning, writers).

Prune without mercy. Yes, go ahead and plant with great heart and hope. Move through your first and second drafts with verve and confidence. But when the time comes, walk through what you’ve sowed and see what needs work. Every spring I whack my rose bushes down to ugly nubs. Weeks later, they come back straight and lush, every bloom perfect. You must be as ruthless with your scenes. Learn to recognize what parts of your book have turned leggy and unnecessary. Cut them out. 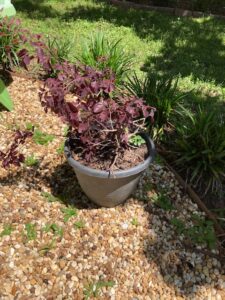 If you can’t bear to throw them away, store them in a separate place. I have a “hospital” section of my yard where I put the plants that didn’t quite fit. They live there until I can find a good place to put them. See that sad fellow at left? I spent a lot of money on him, planted him in the wrong spot and he almost died. He’s recovering in a pot until I can find out where he truly belongs. So it should be with scenes and chapters. Don’t keep material because you “spent” a lot of effort on it.

Weed every day. Let’s talk about your weed problem. You know, those flabby adjectives, the needless adverbs, the redundant dialogue tags, junky “filler” words. Filler words are the crabgrass of fiction. Look at this passage:

Ted felt felt the hot press of air against his neck and he knew there was nothing he could do about what had happened. He wondered why he had waited so long to pull the trigger. He knew it was his fault that the woman was dead. And he was worried now that her husband was going to come after him.

And this one, filler words weeded out:

The sun burned on the back of Ted’s neck. Or was it the hot press of guilt he felt? It was too late to change what had happened. The woman was dead. And now he was sure her husband was coming after him.

I find it’s a good idea to go over your last day or two’s work and do some weeding before you move on to new stuff. It helps you get back in the groove and it keeps things under control. I love to weed. It makes me feel like I’m accomplishing a lot when all I’m really doing is cleaning up. Some days I devote only to weeding and that’s okay. As Margaret Atwood says, “At the end of the day’s [writing], you should smell like dirt.” 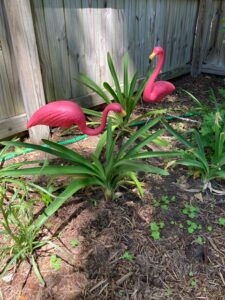 Leave room for serendipity and whimsy. I’m with Charlotte Bronte on this one. I don’t like my gardens too pat and tidy. I like surprises instead of ho-hum plants. I like paths that wind instead of linear ones. I like a touch of humor whenever possible. I have a section of my yard where I put garden tchotchkes. A solar watering can that lights up at night. Some small statues. A gaudy ceramic gecko. A globe that spews out water when you turn on the hose. No gnomes. But probably too many flamingos. Call me tacky. These things make me smile. If it works, don’t be afraid to let something a little odd, a little off-kilter, into your story. Light is an effective contrast amid darkness.

Don’t try to grow things that aren’t really you. I am really good with orchids. But I can’t seem to keep a Christmas cactus or basil plants alive. My writer’s heart is dark. I can’t write humor and have stopped trying. Know who you are as a writer. Don’t follow trends.

Know when to give up. Not with writing or gardening itself. Because both are life-long loves. But if something isn’t working, admit defeat and move on. Sometimes, a plant just exercises its God-given right to up and die. So it is with bad ideas, misbegotten plots and moribund books. Plant new bulbs and start over. 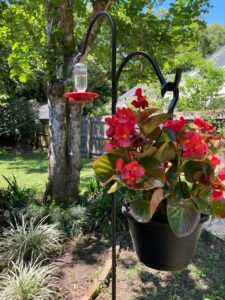 Cultivate friends. I have twelve bird feeders in my garden. The wrens, cardinals, bluebirds and others that visit keep me company and give my garden efforts extra meaning. I just put out a hummingbird feeder, complete with a bright red begonia. (Hummers love red). No one’s showed up yet, but I love waiting. So it is for you as a writer. Seek out and maintain writer friendships, especially those who can help keep you on course, emotionally and craft-wise.  As a writer, you are so often alone and in the dark. These garden visitors bring you light and hope.

The last word goes to Victor Hugo, from Les Misérables: “Sometimes he used a spade in his garden, and sometimes he read and wrote. He had but one name for these two kinds of labor; he called them gardening. ‘The Spirit is a garden,’ said he.”

24 thoughts on “A Gardener’s Guide To Writing. Or: Prune Without Mercy”