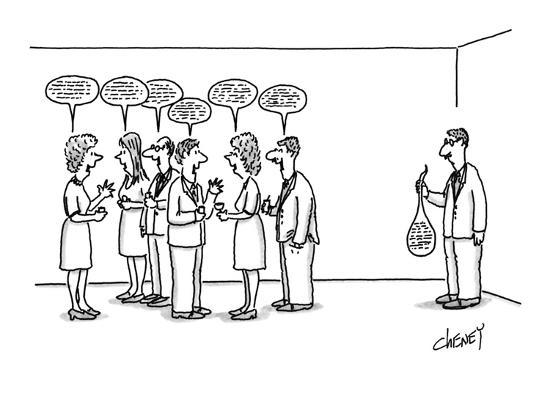 Pleased to meet you! Hope you guess my name.
But what’s puzzling you is the nature of my game.
— The Rolling Stones, Sympathy For The Devil

Life is a cocktail party, as Mike Jagger once sang. So is fiction when it comes to introducing your protagonist. (tortured metaphor alert. More to come.) I’ve noticed a trend in our First Page Critique submissions of late. Our submitting writers are having trouble introducing their main characters to their readers.

Most recently, James dealt with this issue in his Sunday critique of a self-described “comic noir” submission titled The Book Shop. James wrote:

The narrator is passive. Maybe that’s intended at the start, but at least give him some feeling—annoyance, aggravation, mad because his wife left him—anything. (Note: We don’t know what sex the narrator is, and that’s a problem. I’ll assume for discussion purposes that it’s a man. But do something on this page to clue us in.)

I had exactly the same reaction on the two points James mentions. First, I assumed the narrator was a woman! Which tells you there is a very basic problem. And second, as James says, the narrator is passive in feelings and thought. And the other character, the old woman, is vividly drawn, which intensifies the problems.

Maybe this post is going to sound too basic for some of you. But I think we need to review how to properly introduce your protagonist. This came up in a thread on my Facebook feed recently. Here’s some interesting comments from both readers and writers:

So how do you do a proper how-do-you-do? It’s not as easy as you might think. Consider first, what point of view you’re working in. If you’re using first person, you are greatly limited in what you can describe because everything must be filtered only through your protagonist’s “camera.” But there are pitfalls even in third-person POV.

Now, not all books open with the protagonist. Some might have a prologue or an opening chapter say, from the villain’s POV. But whenever your protag does appear, you must establish two things immediately:

Here’s another thing that bugs me. Gender-neutral unisex names are popular now. Especially in fiction. So if you’ve chosen a first name like Blair, Casey or Jordan, you darn well better be clear if it’s a he or she. I just finished Emily St. John Mandel’s The Glass Hotel. Loved it more than I can say, but the first chapter is titled “Vincent In The Ocean” and it took me at least four chapters to get used to the conceit that Vincent is a woman. (a rather twee reference to the poet Edna St. Vincent Millay).  Don’t be coy about this, please. It just annoys readers.

So how do your gracefully slip in your protag’s name? Third person is no problem, just slip it in as soon as possible. I always put “Louis Kincaid” somewhere on my first page. But for Heart of Ice, he doesn’t show up until chapter two:

He stood at the railing of the ferry, the sun warm on his shoulders but the spray on his face cold.

Twenty-one years ago he had stood at the bow of a ferry much like this one. Then, the air had been filled with the smell of diesel but now the ferry left nothing in its wake but a plume of white water and shimmering rainbows.

Then, it had all been about leaving behind the ugly memories of his foster homes in Detroit and going “Up North” to the magic island just off the tip of the Michigan mitten. It had been about eating all the fudge his stomach could hold, seeing a real horse up close and racing the other foster kids around the island on a rented Schwinn.

Now, it was all about her.

Louis Kincaid looked down at Lily. She was peering toward the island so he couldn’t see her face. But he didn’t need to. He knew what this trip meant to her. He wondered if she had any idea what it meant to him.

Only seven months ago had he found out he was a father. It had been a shock, but from the moment he saw Lily he was grateful Kyla had not done what she had threatened to do that night in his dorm room. He could still hear their angry words.

Hers—I’ll get rid of it.

He looked down again at Lily’s crinkly curls.

This book is about Louis connecting with the daughter he didn’t know he had. So I felt compelled to go a little heavy with backstory to “introduce” both Louis and Lily. But this is all you get. The forward plot takes over.

But first person is much harder. One graceful way is to deal with it in dialogue via a second person. James does this in his first book Romeo’s Rules on the first page:

“Happy to meet you Mike. Except…”

You can also be direct as Sue Grafton famously did in her opening of chapter one, book one:

My name is Kinsey Millhone. I’m a private investigator, licensed by the State of California. I’m thirty-two years old, twice divorced, no kids. The day before yesterday, I killed someone and the thought weighs heavily on my mind.

Likewise, Jack Reacher needs no introduction. Yet Lee Child is always careful to insert the guy’s name at the get-go. Although we have to add a caveat here: In Killing Floor, Child switches to first person for Reacher and we never get his name. When you’re a international bestseller with 25 books under your belt, you can do this, too.

In Gone Girl, Gillian Flynn is working in first person, toggling between husband Nick Dunne and Amy Dunne POVs. She titled each chapter with their names. This obvious ploy works mainly because she is also using a ticking-clock timeline with the fake abduction. Not recommended for beginners.

Another thing to establish as early as possible: exact age or age-range of your protag. And you should begin to establish the world view, education level or sophistication (or lack). Readers want to bond with and root for your protag and the sooner you can give them elements to grab onto, the better.

What should you not do when introducing your character?

Hello, my name is Norman Feckless. I’m a really successful gynecologist with a practice in LA. But I grew up in Fresno and I can’t tell you what a hell hole that was. God, you should meet my mother… Nothing like my wife Janet. Janet is hot, man. But I meet a lot of gorgeous women in my line of work. In fact, I married three of my patients. Of course, not all at once. Did I mention that Janet left me last month? Just ran off with her yoga instructor, Nancy. I got to keep her cat, though. That damn cat hates me…

Another issue to consider — ethnicity. My protag Louis Kincaid is biracial. It is pertinent to his character arc and in a couple books directly figures in the plot. But via reader feedback, I found over the years that if I don’t somehow slip this fact in early, readers feel misled. I recently did a critique for charity and in 30 pages, the writer failed to convey the fact that her protagonist was Black. I mention this only because race was directly related to her plot, especially in the tense interactions with her white husband. Is “white” now a vestigial default in fiction? Given the dazzling and expanding range of ethnicity of crime fiction protagonists, do we still need to mention it? I would like to hear what you all think about dealing with this.

Last point, and this goes back to the problem James had with his First Page submission: It is important, when introducing your protag, that he or she not be a cipher. In the submission, the secondary character, an older chubby chatty woman is well drawn with idiosyncratic dialogue and description. The protag, by comparison is pale and emotional impotent.

I was engaged by the seal woman. The poor soul with no name — well, he’s that guy lurking alone in the shadows with a scowl and a glass of scotch.. Don’t leave your protag sitting on the sidelines. Introduce him with a few good lines and get the party going.

32 thoughts on “How To Properly Introduce
Your Protagonist”