It was going to be a tough crowd. They had gathered out on the docks of the Bahia Mar resort in Fort Lauderdale — a pelican-glide away from the Busted Flush’s slip F18, no less. 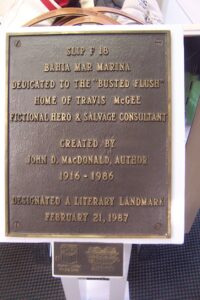 The plaque at slip F18 at Bahia Mar.

It was hot, and the audience was sweating under the October sun. But no one was sweating more than me. Because I was there as part of a panel of mystery writers to talk about what John D. MacDonald meant to me, and I had never read one of his books.

I could have lied. But I didn’t. I fessed up, and after the gasps died, I talked about the stuff I had read -– the good old stuff -– John D. MacDonald’s short stories.

I hadn’t read them all. He turned out nearly a million words worth of stories in his life, and many were lost to time. But I had read everything I could get my hands on because in those days, I was teaching myself how to write short-form fiction, and sticking to Carver, O’Conner, Oates just wasn’t doing it for me. I found a copy of MacDonald’s collection, The Good Old Stuff in a used book store in Fort Lauderdale. When I read those stories, it was like someone smacked me aside the head with an oar, forcing new synapses to fire in my writer-brain. 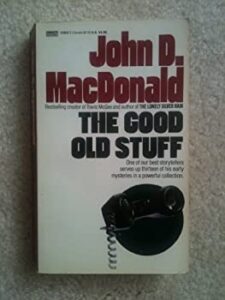 Most these stories were begun after MacDonald returned from the army as a way to support his family. He worked eighty hours a week, writing across a style spectrum that included crime pulp, westerns, sci-fi and fantasy, keeping as many as thirty-five submissions in the mail at all times.

He also wrote love stories for women’s magazines, usually about hapless husbands. I still remember this scene from “She Tried to Make Her Man Behave,” where a wife confronts her husband with this: “The marriage book said a good marriage is a case of both people making adjustments.” To which the husband relies, “That sounds as if I’m due to make one.”

In 1950, in “Breathe No More,” MacDonald gave us the McGee prototype Park Falkner, an eccentric sarong-wearing millionaire who lives on Grouper Island in Florida. Falkner’s gal-pal is Taffy Angus, who is the sun-kissed rough draft for every McGee woman who drifts off or dies horribly.

So, back to that sweaty day at Bahia Mar. I told the audience what I had learned from reading the good old stuff. I told them that these stories had everything — vivid characters in diamond-bright settings, elegance and economy, wryness and wit, and that sense of inevitability that I search for in all good fiction. And every one of them, even the flawed efforts, had that strange music, what MacDonald himself called “a bit of unobtrusive poetry.”

For my reward, the organizer of the event presented me with pristine copy of The Deep Blue Goodbye. I read it that night in one sitting and I didn’t look back as I made my way across the MacDonald rainbow. On my beside table now is The Scarlet Ruse.

Maybe it is because I am getting old, but when I read this passage recently, it really got to me. It is classic Travis and undoubtedly classic MacD himself (who was a mere pup of 56 when he wrote it):

I collect moments of total subjective pleasure, box them up, and put them in a shed in the back of my head, never having to open them up again, but knowing they are there.

So what would be a gem in the collection?

A time when I am totally fit and I have just come wading through one the fringes of hell, have been stressed right up to my breaking point, have expected to by whisked out of life, but was not. I am out of it, and if there is any pain, it is too dwindled to notice. I am in some warm place where the air and sea are bright. There are chores to do when I feel like it, but nothing urgent. I am in some remote place where no one can find me and bother me. There is good music when and if I want it. There is a drink I have not yet tasted. There is a scent of some good thing a-cooking slowly. There is a lovely laughing lady, close enough to touch, and there are no tensions between us except the ones which come from need. There is no need to know the day, the month, or the year. We will stay until it is time to go, and we will not know when that time will come until we wake up one day and it is upon us.

The passage resonates with me because this past annus horribilis has made me cling ever more tightly to the few things in my life that matter. Like Travis, I am in a remote place (northern Michigan) where no one can bother me. I am happy with good music, a little drink of the locally distilled whiskey, perch cooking in butter, friends and family held close. Like McGee, I am comforted in the notion that I am lucky to have survived, hell, even thrived, for six decades and counting. That, and the fact that I as I slide into…ahem…the late autumn of life, I, too, am more determined than ever to “collect moments of total subjective pleasure, box them up, and put them in a shed in the back of my head.”

And to not fret about the future, to just “stay until it is time to go, and we will not know when that time will come until we wake up one day and it is upon us.”

TKZ hive: What books or writers do you return to again and again? What writers tickle your brain and enlarge your heart?

35 thoughts on “Collecting Moments of Pleasure,
Thanks To A Favorite Author”