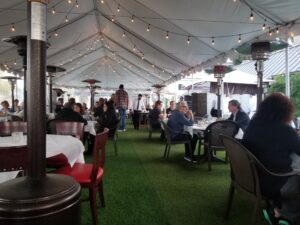 The other night Mrs. B and I did something we hadn’t in over a year—went out to eat inside a real restaurant with real friends! This may not sound like much to you in your neck of the woods, but we live in the lockiest of lockdown states, frustratingly trying to claw our way toward a sense of normalcy. Well, as the man who was digging to the center of the earth was heard to say, “I’m closer than I was yesterday.”

So we went to one of L.A.’s classic steakhouses, Monty’s. Technically, their “inside” also includes a large tent with acrylic windows, which was where we were seated. We had an early reservation and by the time we were finished the place was packed. Grand it was to hear chatter, laughter, and clinking silverware in a full venue once again.

Making it all the nicer was a young server, about twenty-five-years old, who had a sense of humor and, I would guess, a lovely smile whenever she got out from behind the face mask.

The friends were from our theater days, and it was so much fun to share memories face-to-face—of shows we were in, and favorite performances we’d seen. I talked about being front-row-center for the original Chicago in New York (featuring the legendary Gwen Verdon, Chita Rivera and Jerry Orbach). That got us onto the subject of musicals, and Guys and Dolls came up. I told them about my recent discovery that the character Sky Masterson was named for Damon Runyon’s friend Bat Masterson, the gunslinger-turned-New York sports reporter.

We then debated whether Marlon Brando was right for that role in the movie (Frank Sinatra wanted it, but Brando was the bigger star, leaving Sinatra with the part of Nathan Detroit). I was offering the pro side of the argument when our server checked on us.

Feeling cheery, I looked at her and said, “What do you think of Marlon Brando?”

Thinking she hadn’t heard me right, I said, “Marlon Brando, the actor.”

She shook her head.

Friend Cris said, “He was the old godfather in The Godfather.”

“I haven’t seen that,” the server said.

I bent over and recovered my chin from the floor.

When the server left us I asked the table, “How in the heck does a twenty-five-year old not know who Marlon Brando was?” Even though he died in 2004 and his best acting days were over around 1980, still…I mean, come on…it’s Brando! He changed the face of acting in America. He was the biggest onscreen star of the 1950s. And even twenty-five-year olds have access to TCM!

But then again, when Brando was big, we only had three TV networks. There was no Google, YouTube, social media. Today you have to digitally sprint every day just to keep up with what’s current. And what’s current will probably be dated in a month. Anything older than five years is ancient history.

Which brings up the question of using pop culture references in your fiction. Should you use them if a future reader won’t know what—or who—in blue blazes you’re talking about?

Here are my thoughts:

1. A pop culture reference is usually more realistic than something generic.

She plopped in a chair and watched TV.

Is not as effective as:

She plopped in a chair and watched Wheel of Fortune.

2. Using a pop culture reference is no different than using some current technology.

Remember when flip phones with cameras hit the market? Several thriller writers hopped on that. Now it seems so quaint. But that doesn’t mean they shouldn’t have been used at the time.

3. Most readers will subliminally appreciate the specificity even if they don’t know the reference.

4. If a reader wants to know a reference, they can look it up just by going to CompuServe….I mean AskJeeves…I mean AltaVista…I mean Dogpile…I mean…

5. Consider using one or two pop references in a character’s backstory.

I like letting someone know that as a little girl the character was a devoted fan of Animaniacs and could rock The Macarena.

6. As with anything, you can overdo it.

How much is too much? It’s entirely up to you. If you feel a reference is valid, put it in. Reassess during the editing phase. Ask your beta readers about it.

I have but one last comment: Marlon Brando! I mean, come on!

So how do you feel about pop culture references in fiction? Like or dislike? Use or don’t use? How do you make the decision?