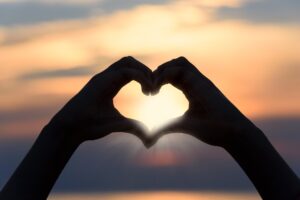 Happy Valentine’s Day! Since love is in the air, I thought I’d write about my own passionate affair. Don’t worry. My wife knows all about it, and doesn’t mind, though she wonders at my ardent attachment. “It’s just a punctuation mark,” she says.

“Not just any!” say I. “It’s the most versatile of the lot. It’s clean and strong. It clarifies and emphasizes without being boorish. Do not belittle my love of the em dash!”

Or something to that effect.

So yes, I confess. My heart is enraptured by the em.

Now, there are actually three types of dashes you need to know about. While technically not a “dash,” the hyphen is a line like the other two. It’s the shortest of the bunch because it is used only to connect words that have a combined meaning. Like: He’s a two-time champion.

A bit longer is the en dash. The main thing to know about the en is that it’s primarily used to join numbers, as in “The Dodgers beat the Reds, 3–2.” Or, “Robert Benchley (1889–1945) was an American humorist.” Many writers use a hyphen or an em dash for this, and shouldn’t.

By the way, the names en and em come from the days of movable type. An en dash was determined to be the approximate length of the typeface n. An em dash was the length of the m. (Frankly, I think it would have saved a lot of confusion if these dashes had been named Marge and Sylvia.)

Now, on to the star of my article, the em. It is a crisp, efficient dash used to set off a word or clause for emphasis or additional information. I use it instead of a parenthesis or a colon. (Those of you have who been longtime followers of TKZ know of my disdain for the semicolon in fiction. I am with Vonnegut on that score. “Here is a lesson in creative writing,” he wrote. “First rule: Do not use semicolons…All they do is show you’ve been to college.”)

(Astute readers will note that in the above paragraph, and this one, I use a parenthesis. That’s because, when it comes to punctuation, I draw a distinction between fiction and nonfiction. The parenthesis and semicolon are useful in nonfiction. I use them myself, just not in fiction.)

Actually, I may have used a parenthesis on occasion in my short fiction. Stephen King loves parentheses. He uses them as a device to get into the head of the viewpoint character or to drop in a little backstory. Here, for example, is a clip from one of his early short stories, “Children of the Corn.”

He stopped, looking directly into the corn. He found himself thinking (anything to untrack from those rags that were not rags) that it must have been a fantastically good growing season for corn.

His mind was elsewhere, listening to the dull buzz of a cicada burrowing into one of the nearby elms. He could smell corn, dusty roses, and fertilizer. For the first time they were off the turnpike and in a town. A town in a state he had never been in before (although he had flown over it from time to time in United Airlines 747s) and somehow it felt all wrong but all right.

Here’s one where King uses parenthesis and em dash both!

While she picked at the knots (her face was set in a peculiar way—expressionless but tight-mouthed—that Burt remembered his mother wearing when she pulled the innards out of the Sunday chicken), Burt turned on the radio again.

(Down in the comments, tell me what you think of King’s use of parentheses. It may help him sell more books.)

Sometimes I use the em dash instead of a comma. Here’s an example from Romeo’s Hammer:

So what about the lack of clothing? A love scene gone bad? Someone who had been with her while she was drinking—or drugging—herself? Her condition when I found her was such that she had to have come from one of the beach houses. Access to the sand is cut off all along PCH. She didn’t wander down from the street.

I used the em dash here because I wanted more emphasis on the word drugging than a comma setoff would create.

The other major use for the em dash is interruptions in dialogue. Please do not use ellipses for this! Those three dots are used for a voice trailing off by speaker’s choice.

Stan turned around. “Let you what?”

The em dash shows an interruption, which should immediately be followed by the other speaker’s words (or an action which cuts off the sentence, like a bullet through the heart). Again from Romeo’s Hammer:

“That’s a fine achievement,” I said. “You do know that kara is an ancient word that means to cleanse oneself of evil thoughts, and to be humbly receptive to peace and gentleness. Yes? You are therefore abusing your own discipline. That’s not a good way to—”

The em dash is also used for self-interruption:

“Slow down,” Jack said. “You’re driving too—stop! Look over there.”

In doing a little research, I was delighted to find that em dash love is so pervasive that it was even covered in the NY Times:

Mary Norris, the New Yorker’s “Comma Queen” and the author of “Between You and Me,” wrote in an email that the em dash “can be substituted for almost any other mark of punctuation — the comma, the semicolon, the colon, the period, a pair of parentheses, the quotation mark, even a bullet point in the making of a list.” Just don’t use more than two in a sentence, according to some experts.

[W]riter Laura van den Berg confessed in her own tweet that, “after years of resistance,” she had fallen “into headlong love with the em dash. I love the way it can create the feeling of a fractured/incomplete/interrupted line or thought.”

Don’t put a space before or after the em dash. Only newspapers using the AP Stylebook do that, and only because columns of newsprint (remember newsprint?) are easier to justify with the spaces.

In Word for Mac, you make a hyphen by typing the hyphen key. (You’re welcome.)

For PC users, things are a bit more involved. You may consult this article.

Okay, TKZers, over to you. Do you love the em dash? Is there another punctuation mark you’d like to send a Valentine to?

39 thoughts on “The Em Dash and I—A Love Story”