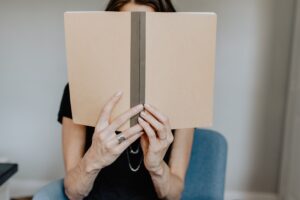 I recently gave three books to S., my fourteen-year-old granddaughter. S. has up until now not been a huge fan of reading. She flirted with the Warriors series — I think of those books at least twice a day, which would be every time “my” feral cat shows up the back door, waiting for me to feed him — and manga books,  but the works that have constituted the “required reading” part of her educational curriculum up to the present would, I’m afraid, divert just about any fledgling reader to computer games, YouTube, and King of the Hill reruns. My own experience is that when something that is supposed to be enjoyable becomes a requirement it becomes drudgery. 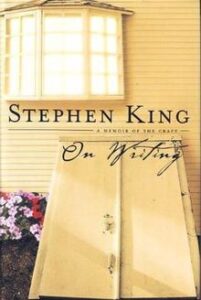 I have gently attempted on a number of occasions to get her interested in reading. No go. I therefore recently decided to get the reading camel’s nose under the tent of her interests and/or needs through non-fiction. “Needs” won. S. indicated to me that she had experienced some difficulty with a couple of school writing projects. I could have blessed her with a couple of instructive boring grandpa lecture but instead gave her On Writing: A Memoir of the Craft by Stephen King. I picked that one because she had at least heard of King and the book isn’t just about writing. King also goes into his life, his background, what drives him, what derailed him, what got him back on track, and how important other people were and are to the process. With regard to the last, King’s name may be on all of those book spines, but there would not be nearly so many of them if not for Tabitha King, his wife, who worked in bakeries when he was unpublished, scheduled interventions after he was published, and ministered to him during multiple dark days and weeks after his life-threatening injury. I handed On Writing to S. and she smiled with the good grace that a well-mannered child does when given clothes instead of a pony for Christmas. I then said, “The great thing about this book is that when you read it you can hear the author talking to you.” She smiled as if she had received that pony after all. Oh, On Writing does cover the act and art of writing, too. It has helped S. with her problem. Now she enjoys writing and reading. 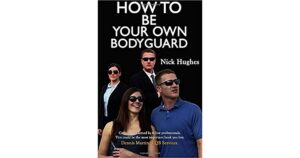 I did not stop there. I chose a second book to give S. because she is with increasing frequency getting out more on her own. Dad and Grandpa, for a number of reasons, won’t always be around to smite the varlets who might otherwise accost her as she innocently goes about her business.  I accordingly placed How to Be Your Own Bodyguard by Nick Hughes into her hands. Nick has handled security for movie sets and rock musician tours (among many other things) and lays his subjects and advice out in a very personable and businesslike manner with plenty of interesting accounts of practical applications of his considerable skillsets. The volume discusses such topics as situational awareness, threat assessment, and, if at all possible, trouble avoidance rather than confrontation when one is exposed to adverse situations.  I gave S. my copy, which includes a personal inscription from the author (full disclosure: Nick and I consulted on presentation issues during the writing of the book but it is all his. I don’t get a penny from the sales nor do I deserve any) and thus increased its worth in her eyes. 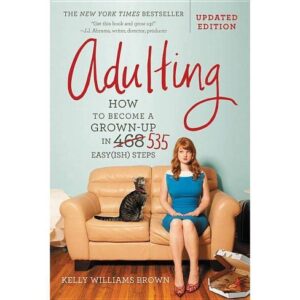 The previous two books contain advice that S. can use now. The third is one that she can look at now and utilize later. It is Adulting: How to Become a Grown-Up in 468 535 Easy(ish) Steps by Kelly Williams Brown. Imagine your eighteen-year-old self standing at the entrance of a long, dark, and unfamiliar tunnel and having a friend who is several years older than you standing at the other end, advising you of the pitfalls you will encounter as you take your steps into the unknown. That sums up this book. It covers topics such as how to apply for a job, work once you get it, find an apartment, get a pet, deal with friends, and handle money. It is a cheat sheet, if you will, for the pop quiz that is early adult life. I don’t agree with all of the author’s suggestions but she picks all of the right topics, including the ones that young adults don’t think of until they come calling with little or no warning. All of this advice is given in a friendly and appropriately humorous voice. The book won’t solve every problem S. will meet within a couple or five years but it will hopefully give her a leg up on them. As I often tell folks in another context, better to have and not need than need and not have.

S. is now reading and seems to be enjoying the process. She is also hopefully learning some practical things along the way. Mission accomplished. Have you ever given or recommended a self-help book or a novel to someone younger than you? Was it with the hope that they would start reading, or at least start enjoying it? If so, what was the book, and did it work?

Thanks once again for dropping by. It means a lot.

29 thoughts on “Leading Them to Water…”