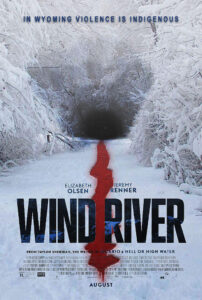 I am still working away — in fits and starts — on The Lake Effect, my genre-bending novel. I became stuck a couple of weeks ago on what is a common problem for writers. There was something about the narrative that I didn’t like. It had to do with the backstory. I had been dropping parts of it like breadcrumbs throughout the narrative and it kind of worked. I decided, however, was that I have no business putting something out there that “kind of” works if I want someone to spend their time and lucre on it.  I wasn’t quite sure how to fix it or even if it could be fixed without some major surgery.

I was at about the same time conducting an unofficial Taylor Sheridan film festival for myself. Sheridan’s name may not be familiar to you but his fingerprints show up here and there as an actor (he had a recurring role for a couple of seasons in Sons of Anarchy) and as a screenwriter (the films Sicario and Hell or High Water, and a television drama series named Yellowstone). Sheridan’s main strength as a screenwriter is in his dialogue and character development. I wasn’t looking for hints when I started binging his work. I was just watching all of it because I like it. I kept coming back, however, to a movie he scripted named Wind River.

Wind River is a contemporary western set on the Wind River Reservation in Wyoming. The plot is simple enough. Cory Lambert is a U.S. Fish and Wildlife tracker tasked during a bitterly cold winter with tracking down a predator which is slaughtering Reservation livestock. While doing so he comes upon the bruised and frozen body of a young Native woman named Natalie Hanson. She is ill-dressed for the weather — barefoot, in thin clothing — and miles from any building. An autopsy concludes that Hanson died of exposure but also sustained head trauma and sexual violence.  FBI Special Agent Jane Banner is assigned to investigate the case, which ultimately cannot conclusively be found to be a homicide. Banner is a fish-out-of-water — she is a Florida native and assigned to the Las Vegas FBI office — but her lack of preparedness for Wyoming’s winter weather and relative inexperience in investigative matters is more than made up for by her drive to make sure that the right thing is done on Natalie’s behalf.

The film does a good job of simply but effectively presenting the clusterfig that federal and tribal jurisdictional differences create as Banner decides to pursue the case, even if she is probably on shaky legal ground in doing so. She persuades Lambert to help her, given his knowledge of the area. Their investigation moves in a straight line but seems to reach a dead end. The audience meanwhile knows nothing more than Lambert and Banner do. About three-fourths of the way into Wind River, however, the present segues smoothly into the past, and the audience learns what occurred over the course of a very intense few minutes that led to Natalie’s tragic end. The story then reverts to the present and a few seconds later all hell breaks loose, again and again. My description does not do justice to what occurs, but on the off-chance that you borrow the video from the library (it also pops on and off the streaming services from time to time), I don’t want to even come close to spoiling the plot for you.

I watched the movie four times over a period of an equal number of days before it hit me that the solution to my dilemma was in front of me. Rather than drop flashback breadcrumbs throughout the story, I gathered them into a small loaf, coated that with a bit of garlic butter, and served it up warm, steaming, and all at once about two-thirds of the way into my own narration. It worked wonderfully. Thank you, Mr. Sheridan.

I am sure that my primary reason for watching Wind River over and over was that I like it. I do the same thing with Hell or High Water, which I previously mentioned here. I have concluded, however, that it is entirely possible that my subconscious was trying to steer me toward a possible solution to my writing problem. It just took me a bit of time to pick up the visual and verbal cues. It figures. I have always been a slow study.

How about you? Has an outside source — one that you were drawn to by chance or whimsy — given you an unexpected solution to a difficult problem, or at least a different way of looking at/approaching something? If so, please share your episode with those of us here assembled. Thanks as always for visiting.

47 thoughts on “Listening to Your Inner Voice”