Is it too late in the day, too quaint a notion, to revive an idea of social deportment your grandmother called being nice? 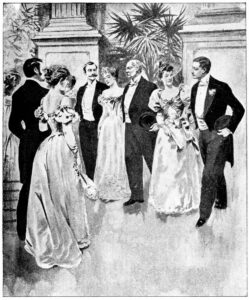 We all know social media is an unavoidable part of a writer’s branding and marketing. But we also know that the Sturm und Drang of contemporary culture and interchange is rife with anger, hate, bile, vituperation, ridicule, and scorn—and that’s on a good day.

There are many reasons to avoid becoming part of the hatestream, not the least of which is that it can mess you up mentally. People get addicted to hate and the Dopamine rush of spewing it. Day after month after year of that will shrivel a soul as surely as meth shrivels the brain.

These thoughts crossed my mind recently as I perused a book published in 1899. I get daily alerts from Gutenberg.org, the site that churns out ebook editions of public domain works. If I see a title that intrigues me, I’ll have a look. One such title was Twentieth Century Culture and Deportment by Maude C. Cook. Turned out to be a big tome on etiquette. And what is etiquette but rules of behavior that keep us from being boors, jerks, haters, and dopes?

You decide. Here’s a sampling:

Learn to govern yourself and to be gentle and patient.

Guard your temper, especially in seasons of ill-health, irritation, and trouble, and soften it by a sense of your own shortcomings and errors.

Never speak or act in anger.

Remember that, valuable as is the gift of speech, silence is often more valuable.

Do not expect too much from others, but forbear and forgive, as you desire forbearance and forgiveness yourself.

Never retort a sharp or angry word. It is the second word that makes the quarrel.

Beware of the first disagreement.

Learn to speak in a gentle tone of voice.

Learn to say kind and pleasant things when opportunity offers.

Study the characters of those with whom you come in contact, and sympathize with them in all their troubles, however small.

Think social media would be a tad different in tone if people took the above advice? More:

Never permit yourself to be drawn into an argument in general society. Nothing can be more provocative of anger on one side or another, or more destructive to conversation, than a lengthy and, too often, bitter argument. Good breeding would suggest that the subject be changed at once before the controversy becomes heated. Especially should any debate upon politics or religion be avoided as subjects upon which two seldom agree, but which are so close to the hearts of the majority as to cause serious annoyance if their pet beliefs are touched upon or questioned. Be careful, also, not to take the opposite side of every question that is brought up in conversation.

All this to say I know myself well enough to know I can too easily get sucked into a heated exchange. So I avoid them, especially on social media, which is the worst place on Earth to have a rational discussion on anything controversial. It is easier to be a balloon in a knife throwing contest.

And just because I want to help, here’s some further advice from the book. Pass this along to your sons and daughters.

As to temper or disposition, the woman can easily gain some insight into the respective peculiarities of another’s temperament by a little quiet observation. If the gentleman be courteous and careful in his attentions to his mother and sisters, and behave with ease and consideration toward all women, irrespective of age, rank, or present condition, she may feel that her first estimate was a correct one. On the other hand, should he show disrespect toward women as a class, sneer at sacred things, evince an inclination for expensive pleasures in advance of his means, or for low amusements or companionship; be cruel to the horse he drives, or display an absence of all energy in his business pursuits, then is it time to gently, but firmly, repel all nearer advances on his part. 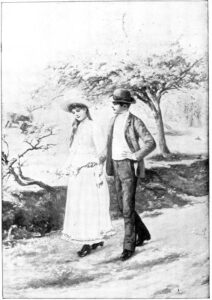 To a man who has become fascinated with some womanly ideal, we would say, if the acquaintanceship be very recent, and he, as yet, a stranger to her relatives, that he should first consider in detail his position and prospects in life, and judge whether or not they are such as would justify him in striving to win the lady’s affections, and later on her hand in marriage. Assured upon this point, and let no young man think that a fortune is necessary for the wooing of any woman worth the winning, let him then gain the needful introductions through some mutual friend to her parents or guardians.

Under the heading “Trifling”:

Still more reprehensible is the conduct of the man who insinuates himself into the affections of a young girl by every protestation and avowal possible, save that which would be binding upon himself, and then withdraws his attentions with the boastful consciousness that he has not committed himself.

Again, the young lady who willfully, knowingly, deliberately, draws on a man to place hand and heart at her disposal simply for the pleasure of refusing him and thus adding one more name to her list of rejected proposals, is utterly unworthy the name of woman.

Maybe the “old way” of doing things wasn’t so bad after all. What do you think?

39 thoughts on “Notes From the Social Media Deportment Department”