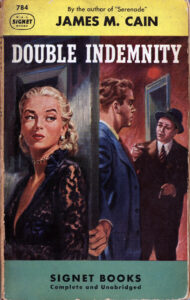 (Disclaimer: The quiz part of this post I lifted from one my own old posts. Don’t sue me.)

I had my usual hot date this past Sunday. He’s a dream-boat of a guy and he never disappoints me. We met in a bar in Toronto back in my salad days, and had a Same Time Next Year sort of thing going on. But then we drifted off into other things and lost touch.  But a couple years ago, I ran into him again and it was like…magic.

Okay, before I get in trouble here, I will tell you that my hot date is Eddie Muller. I first met Eddie oh, maybe seventeen years ago at a Bouchercon conference. Back then, he was still writing crime fiction and had won the Shamus Award for his debut novel The Distance. My sister Kelly and I were nominated for our third book Paint It Black. We lost, but I remember Eddie was very sweet to us. Bought me a drink, as I recall.

Fast forward to 2017 and I ran into Eddie again while I was channel surfing. He had a great new gig as the host of Turner Classic Movie’s Noir Alley series. He would introduce each film, drawing on his lifelong love of the genre. We now hook up every Sunday morning on TCM. (This Sunday it’s Underworld U.S.A., starring Cliff Robertson who’s out to avenge the murder of his father even as he falls in love with a femme fatale named Cuddles, whom he just might have to kill.)

It was Eddie who introduced me to what would become my favorite noir film A Kiss Before Dying. It was Eddie who showed me that my teenage crush Dr. Ben Casey was really a creep in Murder By Contract. It was Eddie who led me to the novels of James M. Cain via Double Indemnity.  Here’s Eddie talking about that seminal classic:

I am still trying to catch up on my noir reading. (I didn’t get to The Maltese Falcon until about ten years ago, I confess). Digesting noir, with its emphasis on oppressive mood and shadowed morality, with its lean mean style, has helped me find my own voice as a writer. I am not a true neo-noir practitioner, but I feel a deep connection to its dark heart. One of the best compliments I ever got was when Ed Gorman wrote of our book Thicker Than Water: “The quiet sadness that underpins it all really got to me, the way Ross Macdonald always does.”

A couple Christmases ago, my husband gave me The Black Lizard Big Book of Pulps. It’s a compilation of the best crime stories from the “golden age” of pulp crime fiction — the ’20s through the ’40s. It’s about the size of an old Manhattan phone book. And to be really honest, parts of it read about as well.

Many of these guys were dismissed as the hacks of their day, churning out their stories for cheaply printed magazines like “Black Mask” and “Dime Detective.” Yeah, they were lurid, the syntax cringe-worthy, the plots thin or nonsensical. But they tapped into a popular need for a new kind of human hero. The most memorable of the heroes became the prototypes for much of what we are seeing in our crime fiction today — lone wolves fighting for justice against all odds but always on their own different-beat terms. Would we have Harry Bosch without the Continental Op? Jack Reacher without Simon Templar? No way… 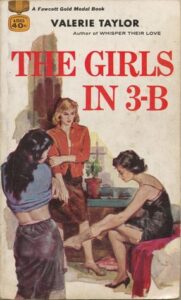 And while we’re at it, let’s not get sucked into the notion that noir was only a guy thing. Valerie Taylor had a career churning out books like The Girls In 3B, a classic ’50s pulp tale showcasing predatory beatnik men, drug hallucinations, and secret lesbian trysts. (Her books, among others, have been reissued by Feminist Press.) And would we have Megan Abbott or Sarah Gran without Dorothy B. Hughes, who wrote the twisty indictment of misogyny In A Lonely Place (the source of the Bogart movie)? Doubtful…

To be sure, not all the old stories — like many of the movies — have aged well. The slang sounds vaguely silly now, the sexism and racism we can explain away as anachronistic attitudes. But the armature these writers created is still sturdy.

Especially in pure writing style. I think we can read these stories now mainly to appreciate the streamlined locomotive style that propels these stories along their tracks. When you read them, you can almost hear James M. Cain whispering: “I’m not going to dazzle you with my writing. I’m going to tell you a helluva story.” 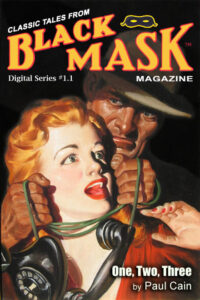 These guys sure knew what to leave out. Here’s a passage from Paul Cain’s “One Two Three:”

Gard didn’t go for that very big, but I told him that my having been such a pal of Healy’s made it all right.

Not: And then we left the apartment and got in my roadster and set out. We took Mulholland Drive out of the canyon and arrived just before dusk. Just: We went.

How can you read that and not smile? I heartily recommend the Big Book of Pulps. And if you haven’t connected with Eddie on Noir Alley, you’re missing out on some of the best stuff television has to offer.

And now, in honor of our pulp forefathers, I am offering up this little quiz of pulp diction slang for your amusement. Answers at the end. And don’t chance the chisel for a cheap bulge, bo. We Jake?

TRANSLATIONS
11. I had been ranking the Loogan for an hour and could see he was a right gee. It was all silk so far.

12. I stared down at the stiff. The bim hadn’t been chilled off. Definitely a pro skirt who had pulled the Dutch act.

14. By the time we got to the drum the droppers had lammed off. Another trip for biscuits…

Answers:
1. telephone
2. taking opium
3. coffin
4. sunglasses
5. cigarette
6. Police
7. Bad checks
8. Home
9. Horses
10. Safecracker
11. I had been watching the man with the gun for an hour and could tell he was an okay guy. Everything was cool so far.
12. I stared at the body. The woman hadn’t been murdered. She was definitely a prostitute who had committed suicide.
13. I have arranged for a doctor to get the information.
14. By the time we got to the speakeasy, the hired killers had left. Just another trip for nothing…

30 thoughts on “Pulp Diction. What We Can
Learn From The Noir Czars”