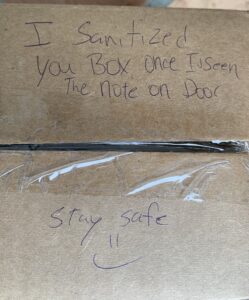 It’s not all bad news out there. The hate-stream does not slosh over every social interaction, though sometimes it seems that way. In the midst of our current crisis there are abundant stories of bravery and heroism on the front lines, and decency and kindness all around.

One such story went viral. A FedEx delivery man brings a package to a doorstep. He sees a note that someone in the house has an auto-immune disorder, so please leave packages outside.

The fellow then goes to his vehicle for some wipes, sanitizes the package, and leaves a little note of his own, ending with “Stay safe” and a smiley face.

My wife and I couldn’t help getting misty as we watched the video. That is the power of a kind act, especially when times are troubled.

In fiction, decency is often shown by way of the “pet the dog” scene. This is where the hero, in the midst of his own vexations, pauses to help someone weaker than himself. It’s an act of basic kindness and thus bonds us even more strongly with the Lead.

I’ll give you two examples. The first is from The Fugitive (1993). You know the story. Dr. Richard Kimble is on the run after escaping a prison bus on the way to Death Row. Kimble was wrongly convicted of murdering his wife. It was a one-armed man who did it, and Kimble is now in a race against time to find him.

At one point Kimble poses as a hospital janitor so he can access the prosthetics records. As he’s slipping out of the hospital he finds himself waylaid by traffic on the trauma floor.

As he waits for a chance to move he notices a little boy on a gurney, groaning. From the look on Kimble’s face we know he wants to help that boy. He’s a doctor! That’s what he does! But he can’t without giving himself away. A nurse gives a cursory look at the chest x-ray, calling out that the kid is okay.

The supervising doctor comes over, sees Kimble just standing there, and asks him to wheel 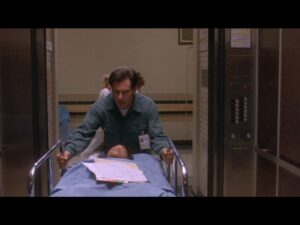 the kid down to an observation room. So off Kimble goes with the gurney.

As he does, he asks the boy where it hurts. He slips the x-ray from its envelope and holds it up to the light.

He determines that the boy needs immediate surgery. So on the elevator he changes the boy’s orders and takes him to the operating room, turning him over to a surgeon who gets the boy in for the help he needs.

Kimble saved a boy’s life at the risk of being found out. The filmmakers use it for just that purpose. The doctor on the trauma floor saw Kimble looking at the film. She catches up to him and confronts him. Not satisfied with his evasions, she grabs his ID badge and calls for Security.

Thus, Kimble’s “pet the dog” moment has gotten him into worse trouble. That’s using it to the max.

My second example is from Casablanca (where so many great moments come from!) As you know, the movie is about a bitter American named Rick Blaine (Humphrey Bogart) who is allowed to run a café/saloon in this Morocco burg because he’s seen as neutral and uninterested in the war that rages around the world. Rick keeps telling people, “I stick my neck out for nobody.”

Rick’s Café is packed nightly with refugees making surreptitious deals to get out of Casablanca. Louis, the French police captain who has local control (with Nazi permission), uses the Café to get gambling kickbacks and women. He identifies desperate young couples who need exit visas but don’t have the money to pay for them. Louis then approaches the wife and offers her the papers gratis…in return for sleeping with him. 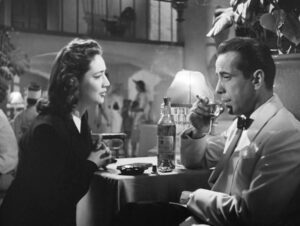 So in the middle of the swirling plot a young wife asks for Rick’s advice. Her husband is at the roulette table, trying to win the money they need for the visas. But he’s losing. Louis has made his pitch to the wife and she now wants to know if he’ll keep his word. Rick, with a disgusted look, says, “He always has.” She presses Rick, asking him, as a man, if someone loved him very much and did a “bad thing” to ensure his happiness, could he forgive her for that bad thing? Rick, remembering how Ilsa left him in Paris, says, “Nobody ever loved me that much.” He gets up and leaves, telling the wife that things “may work out.”

This pet-the-dog moment is observed by Rick’s headwaiter, but also by Louis, who objects to Rick interfering with his “little romances.” This is potential trouble for Rick, because he has just “stuck his neck” out for some refugees, making Louis suspicious of his true intentions.

We don’t need to do any psychological deep dive to understand why the pet-the-dog beat is so powerful. We are naturally moved by acts of decency. It’s the parable of the Good Samaritan. It’s what Lincoln described as “the better angels of our nature.” It is part, I would argue, of the true American character in times of crisis.

We can show that in our fiction by way of a pet-the-dog beat. Even more important, we can show it in our lives by acting decently, the way a FedEx delivery man did a few days ago.

What act of kindness have you observed or heard about lately? In the past, what gesture of decency made an impact on you?

42 thoughts on “The Decency Factor”