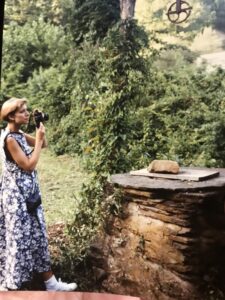 Photo of me by the late poet Glenn McKee, whom I met at the workshop.

Who: Your Faithful Correspondent

Weather Report: Hot and humid Kentucky summer, not a lick of rain

I’d been writing fiction for about two years. Maybe not even that long. Looking at the definition of juvenilia, it would seem hardly to apply to what I was writing then, as I was twenty-seven years old. Not seventeen, or even twelve. But when we talk about writers of any age, their earliest work is referred to as their juvenilia.

Fully employed, but terminally broke, I wanted to combine a cheap vacation with a writer’s workshop. The Appalachian Writer’s Workshop was pretty much the cheapest out there, with the added bonus that Eastern Kentucky was The Land of My People. Though I didn’t actually know anyone there. That didn’t seem a bad thing to me, as I was shy about my writing.

I signed up for the fiction workshop. That worked out well for me because the instructor was named Pinckney Benedict, and now my name is Laura Benedict, and we’ll be married thirty years in July. But I digress.

The workshop was obviously everything I’d hoped for—and more. Now I wish I still had the story manuscript (we’re talking maybe ten pages) that Pinckney enthusiastically commented on. But here’s the thing about juvenilia for most writers: it’s embarrassing. Sure, when I was eighteen, it wasn’t long after I’d accidentally seasoned my from-scratch spaghetti sauce with celery seed instead of oregano that I could laugh about it. The same wasn’t true for my early writing. There’s a video (vhs no doubt) of me reading my work to the Hindman crowd that someone (thoughtfully?) sent us after Pinckney and I married. Mortifying! Even two decades later I threw out the printed pages of my two practice novels, The Disappearing and Skin Hunger (which I still think is a brilliant title, even though someone used it about ten years ago as a YA title).

We are currently deep into a house renovation due to an early fall plumbing disaster. I discovered a box on the top mud room shelf that was full of surprises from our early years. Among them was a story that another Hindman instructor kindly commented on in exchange for a ride from Hindman to the airport in Lexington.

It’s the only story I have from those very early days, and I warn you: it’s not good. It might even be funny-as-hell not good.

I thought it would be fun if I put it up as a First Page Critique. At first I planned to critique it myself, then let you all have at it. Then I decided that I would probably do a critique that would end up ten pages long, and less than thoughtful. Seriously, I practically have to tie my hands behind my back to keep myself from pointing out the first fifty things I see wrong with it.

All this is to say that it takes a lot of writing to become a writer with eight published novels and a couple of collections’ worth of short stories. I’ve been unpublished, and I’ve been a step below amateur, and I’ve been wildly, unabashedly not so good.

Take a few minutes, if you will, to read the beginning of “The View From the Woods.” What criticism could you offer its newbie writer? I’m curious to know if you see the same things I do. I’m so far from this story that it feels like it was written by someone else, so zero worries about my feelings. Or if critiquing isn’t your sort of thing, tell us how you approach your own juvenilia.

[Update, written just after I typed in the excerpt that follows: There’s a dog that has died before the opening of the story. Also, I can’t believe I am offering this up for you all to see. Oh! The melodrama!]

The View From the Woods

”Mama? Mama, did you hear what I said?” Jerilee screamed into the mouthpiece of the phone. “He shot the dog, Mama. He’s killed Petey!” The valley of silence between Jerilee and the other end of the line was breached by a thousand “I told you so’s”. She paced the cracked linoleum on the kitchen floor, twisting the phone cord around her knuckles as she walked. “Mama, what do I do?” Her voice was a frustrated whine.

”Well, I’d say the first thing you do is bury the dog. He’ll be drawin’ flies in the heat. I’ll send your brother along.”

”No, Mama! I don’t need Will over here!” Jerilee stopped pacing. “I want to take care of it myself. I do.”

”Suit yourself, Jerilee. You’re the one who sounds like she’s dyin’. Now just take a deep breath and calm down,” the older woman ordered.

Jerilee closed her eyes, shutting out the harsh sunlight that poured from the kitchen window.

”God, yes,” Jerilee answered. “He took his guitar an’ all them stupid dead animals of his.” She looked out at the tiny, towel-covered lump that sat in the middle of the yard. “An’ his guns,” she spat. “He took his guns.”

”You shoulda known better than to get that little dog, Jerilee. Billy Clyde hated that poor thing, always ready to step on it whenever it made a noise. I’m surprised it didn’t happen sooner.”

”Mama, it was a helpless little animal, for Christ sake.” Jerilee was pacing again. The floor creaked under her feet. “The man’s crazy, Mama. What I can’t believe is he didn’t shoot me. He’ll be back. I know he’ll be back.” Jerilee’s anger had erupted into fierce rushes of blood that pounded in her head; the air around her seemed close and tight. The ends of her fingers, wrapped securely with the phone cord, throbbed with pain.

Her mother’s voice continued from the fingerprint-blackened receiver. “Why, good riddance to bad rubbish, I say. You shoulda got rid of him soon as he started steppin’ out with that little redhead from down the drugstore last year. I never can understand why you keep takin’ him back. One day you call me to say he’s gone, and the next day he’s answerin’ the telephone. You just leave the rest of his junk packed up on the front porch.”

17 thoughts on “First Page Critique (sort of): The Writer I Was”