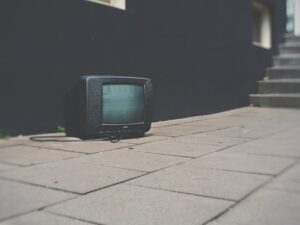 Let me set my current mood for you. It is a beautiful, picture-perfect summer day in Westerville, Ohio. One of my backdoor neighbors is having some work done on his home’s exterior, and the rhythmic sound of busy hands and happy hammers has been heard through our little corner of the world practically non-stop since eight o’clock this morning, which, all things considered, is a reasonable time to start working. The carpenters, however, are also playing music. The song they have been playing over and over without pause is “Photograph” by Ringo Starr. I decided that enough was enough about a half-hour ago. Since my emotional development was arrested at age eighteen and sentenced to life I decided upon a passive-aggressive approach. I am playing “Psychosocial” by Slipknot through a Bose SoundDock amped to eleven and pointed out the window in the direction of the workers. “Psychosocial,” for the uninitiated, sounds like a freight train commandeered by demons and driven straight at the listener. We’ll see how this develops.

That said, today’s topic comes by way of a lifelong friend of mine. He spends what some might consider to be an excessive amount of time on YouTube but it gives him a unique perspective on what is currently happening in popular culture and, perhaps more importantly, where it is going. My friend suggested that I go to YouTube and search for “short stories.” I did so. A number of videos popped up on the menu. Some were videos which consisted of stills of pages of books in the public domain, synched with a sonorous reading of the appropriate page. There were also videos which displayed each page of a children’s book which someone read the page aloud. Those were interesting, but I hope that parents aren’t using that as a substitute for reading their children a bedtime story.

I eventually found what my friend was referring to. I located several videos, each of which consisted of a written story, comprised of white text being slowly scrolled against a black background while an acoustic guitar played as accompaniment. The stories are original, (mostly) graphically erotic in nature,  and generally running from between three to twenty minutes. They have names such as “Pastor’s Daughter” and “Short Story #031.” The stories are variously credited to “Jim Bray” and “Stacey” but I suspect that the same person is writing each and all of them. I can’t attest to the quality of the stories as they weren’t really what I like to read. I was surprised, however, at the number of views that each of the stories has obtained. These ranged from the thousands to the hundreds of thousands. I don’t think it was because of the subject matter, either (though a number of comments for each of the videos were very laudatory in nature).

The reason that I was surprised is that I don’t get it. I asked myself, and will ask you: why would someone go to YouTube to read a story in such a fashion? The format is similar to an eBook.  A reader, however, can control the speed at which one reads with an eBook, while this video book — let’s call it a youBook — scrawls at a slow pace which cannot be increased or decreased. It’s not as if reading material of an erotic nature is unavailable as an eBook, either. YouTube is free, of course, but one can sample almost any eBook on a Kindle at a similar cost and can often purchase the entire work for an amount equal to the change one can find under their car’s floormats. I asked my friend why he read them in the format. He told me that he doesn’t like eBooks but loves YouTube and that this was another way that he could enjoy the website, one that did not feed into his addiction to Taco Stacks videos and stop-motion animation.

What say you? Forget about the erotic genre, which seems to be the exclusive genre in the format for the moment. Ask yourself if this format appeals to you as a reader of any genre or as an author. You could utilize YouTube in this fashion to get your own work out there — it apparently isn’t too difficult to set up  — in order to see if your work flies with an audience or not, but I’m not sure if it’s worth the trouble. I don’t really see this as something an audience would want, what with other, and to my mind better, formats being so readily available. I’m not always the go-to guy to ask about such matters. I appreciated the concept of eBooks almost immediately, but it took me years to embrace the idea of digital music. So what do you think, as a reader and as a writer?

And just like that…no more “Photograph.” Enjoy your weekend.