Nothing stinks like a pile of unpublished writing. — Sylvia Plath

We have a special First Page Critique to talk about today. Because I think it is a splendid example of a question all writers have to ask themselves at one time or another: When it is time to let go of a bad story? I’ll be back in a second with my comments. First, here’s our submission:

It’s not easy starting your life over when people think you murdered your husband and got away with it.

Especially in a place like Morning Sun, Iowa. The folks in Morning Sun — there’s only about four hundred of them — don’t have much tolerance for weird people, especially a rattlebrained housewife who tries to bail out of her marriage after a couple of little marital “tiffs.” But I was born and bred in Morning Sun, and on that Fourth of July when my husband Brad came at me with the Ginsu knife we had just bought off a late-night infomercial, I didn’t figure I had a lot of options.

The police believed I killed him on purpose. My neighbors believed the police. My relatives believed the neighbors. But fortunately for me, the jury didn’t believe any of them. So I walked.

I’m back. I have real mixed feelings about this submission. On one hand, I like the sassy voice. And the opening line isn’t bad. But I found myself longing for less thinking and musing and more live action. And the title? Well, it’s really meh.

Okay, I’m messing with you here. This is an opening for one of my own books, unpublished. Kelly and I wrote this (in fact, we wrote the entire 367-page manuscript) years ago, when we were well along into our Louis Kincaid series. We wanted to try our hand at a female protag and a style that was lighter and humorous. Also, Kelly had decades of experience in the Nevada casino business and we figured we couldn’t go wrong.

We couldn’t sell this book to save our souls. Our own publisher passed on it (nicely) and then, when our agent shopped it around, we got at least ten rejections. And there was a common thread to all of them — that the book’s tone was off, that it was “neither fish nor fowl” as two editors actually said. What they were telling us was that we couldn’t sustain a consistent tone over the course of the story, that it seesawed between humor and seriousness (a theme was sexual abuse), light and dark.  (And to be honest, it was larded with backstory in the first chapter).

We put the manuscript away and took this lesson out of the disappointment: That our writers’s hearts are dark, and we can’t fake otherwise. I’ve come to think of it as our “Shelf Book.” This is a term coined by John Connelly for a story that you have to write and complete just to get it out of your system so you can move on.

I guess that’s the lesson I am trying to convey here today. That some ideas are toxic. And even if you slave away and finish the manuscript, sometimes you just have to admit defeat and let a story idea die.

I know how hard this is to do. Like me, many of you probably have variations of this:

1. A manila folder swollen with newspaper clippings, scribblings on cocktail napkins, pages torn from airline magazines, notebooks of dialogue overheard on the subway, stuff you’ve printed off obscure websites. At some point, you were convinced all these snippets had the makings of great books. (I call my own such folder BRAIN LINT.)

2. A folder icon in your computer called FUTURE PLOTS. These are sylphs that came to you in the wee small hours of the morning, whispering “tell my story and I will make you a star!” So you jumped out of bed, fired up the Dell and tried to capture these tiny teases. Or maybe you’re one of those bedeviled souls who keeps a notepad by the bed — just in case.

3. Manuscripts moldering in your hard-drive. Ah yes…the stunted stories, the pinched-out plots, the atrophied attempts, the truncated tries. (Hey, better I get rid of my bad alliteration here then in my book) These are the books you had so much hope for and they let you down. These are the books you went 30 chapters with but couldn’t wrestle to the mat for the final pin. These are the books you grimly finished even as they finished you. Maybe you even sent these out to either agent or editor and they were rejected. At last count, I have six of these half-birthed monsters still breathing in my hard-drive. And at least four others finally died when my former Acer did, lost to mankind forever. Thank god. Geez…one was called Tarantella and it was erotica. Can it get any worse?

So what do you do with all these ideas?

You expose them to sunlight and watch them burn to little cinders and then you move on. Because not every idea is a good one. Not every idea makes for a publishable book. And sometimes, you just gotta let go.

Or you just bite the bullet and let them exist as your Shelf Books. Mike Connelly had three completed manuscripts before he sent out The Black Echo. L. Frank Baum wrote four adult novels before The Wizard of Oz, and his son records in his memoir that his mother burned them all. Hunter Thompson’s first writing attempt was a rejected novel called Prince Jellyfish about a boy from Louisville trying to make it in the big city. Thomas Hardy’s first novel The Poor Man and the Lady, was rejected by five publishers and the manuscript later destroyed. And before Stephen King hit it big with Carrie (rejected by 30 editors) he wrote a novella The Aftermath, and The House on Value Street, based on the Patty Hearst kidnapping.

Sometimes, bad ideas can birth new life. Michael Chabon abandoned his novel titled Fountain City after 1,500 pages, but then used it as inspiration for his fabulous Wonder Boys. John Cheever wrote 150 pages of a novel called The Swimmer, then decided it was better as a 12-page short story.

I have known some unpublished writers who’ve lock their jaws onto one idea like a rabid Jack Russell and chew it to death. These writers become paralyzed, unable to give up on their unworkable stories, unable to open their imaginations to anything else. I think it is because they fear this one bone of an idea is the only one they will ever have. Two things happen when writers reach this point:

You have to know when to let go. And you have to trust that yes, you will have another idea. Maybe a good one. Maybe even a great one. 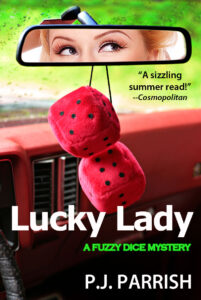 So, what do Kelly and I do with our Lucky Lady? Yeah, we’ve thought about self-publishing it. We even designed a cover for it. We have a base readership and we might get some sales. But whenever I go back and re-read that book — which I’ve done a couple times now with something close to hope — I find it still has warts. And worse, it isn’t true to our writers’s hearts and our readers will sense that.

We could sent it to Canada. To the Brautigan Library in Vancouver, which is devoted to unpublished manuscripts. The library’s inspiration came from the 1971 novel The Abortion: An Historical Romance by Richard Brautigan, in which the protagonist works at a library of unpublished manuscripts. In the novel, no one is allowed to visit the library and read the unpublished works. But in the library it inspired, that’s the whole point. You can go there and read the 300 manuscripts. They are also open to submissions. But I think your toxic story would look better on your own shelf.

33 thoughts on “First Page Critique: When Is It
Time To Let A Story Idea Die?”