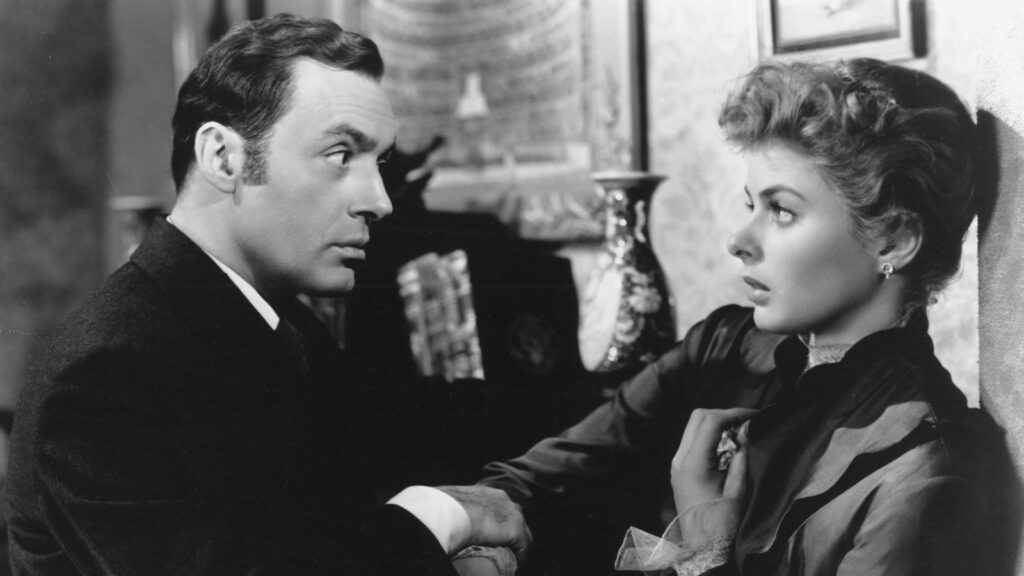 Just back from the Edgars. As banquet chair, one of my duties is to run the PowerPoint, so I stay as sober as a nun until it’s all over. Then, like everyone else, I head to the bar to see old friends and talk about the business.

I met one of the winners, Donald Joh, who won best TV episode for The Romanoffs. His writing partner was Matthew Weiner. You might have heard of him – he created Mad Men, and has won a van-load of Emmys and Golden Globes.

Donald and I got to gabbing about the differences between screenwriting and novel writing. One thing we agreed on was that both need to have a great set-up. I told him I had recently watched Gaslight, the great study in paranoia with Charles Boyer trying to drive his wife Ingrid Bergman crazy. Gaslight falls under what I call the Bad Husband genre. Others include Dial M For Murder (Bad Husband Ray Milland trying to off Grace Kelly), Suspicion (Bad Husband Cary Grant gets miffed when he finds out his heiress wife Joan Fontaine is really poor), and Bad Fiancé Robert Wagner who’s just plain mean and tosses his pregnant girlfriend Joanne Woodward off a roof).

The golden era of the Bad Husband genre seemed to end in the Fifties. We’ve got a few bad seeds now, like Nick Dunne in Gone Girl, but they pale in comparison to guys like Cary. I guess you could include Jack Torrance in The Shining but he was possessed by evil spirits, so that doesn’t count in my book. But I can make a good case for throwing in Guy Woodhouse from Rosemary’s Baby and greedy little Jerry Lundegaard in Fargo, dontcha know?

But back to Gaslight. I told Donald Joh I have trouble watching movies for pleasure because I analyze the good ones for what they can teach me about how to set up a story, how to convey plot only through action and dialogue, and how to establish important things like place, atmosphere, and begin layering in character motivation. So if you’ll indulge me, let me give you a quick breakdown of how Gaslight does this.

The opening image is a foggy London street and a lamplighter making his rounds. Atmosphere and main motif of gaslight planted. Next we see a sign — 9 Thornton Square and look over the shoulder of a man reading a newspaper THORNTON SQUARE MURDER UNSOLVED. Place identified and first good hook is thrown out just via an image. The door of No. 9 opens and a girl comes out. She looks shell-shocked as the gawkers whisper. Her elderly guardian turns down the remaining gaslight and they leave in a carriage. He tells her not to look back and delivers the movie’s first lines:

“You’ve got to forget everything that happened here. You’re going to Italy to see Verbaldi. He was the best friend your aunt had. He will make you a great singer just like your aunt was.”

Another hook is thrown out, a dribble of backstory, and we’re off and running.

That opening scene could be a prologue. Because we next jump ahead ten years and to a new location. But you could also just call it “Chapter 1”. So, we cut to the next “chapter.” A sign in the window says “Verbaldi Music Lessons.” Neat location seque. Inside, the now-adult girl (Ingrid Bergman) is finishing up her lesson. Her teacher tells her she has worked so hard all these years but seems distracted.

Teacher: “You look like her.”
Paula: “But I don’t sing like her, I know. I haven’t a voice, have I?”
Teacher: “Your heart is not in your singing anymore.”

Efficient character development and time/locale bridge. Paula, we understand, feels inferior to her famous aunt and very alone in the world. “I haven’t a voice” is a pitiful recognition of her own insubstantial character. The movie is, in fact, partly about Paula finding her “voice” even as her husband tries to break her down. Paula confesses she is in love. The teacher tells her she needs a vacation. Paula leaves and outside, she embraces the man who had been accompanying her on piano — Gregory Anton. Dialogue:

Paula: “But I don’t know you. I don’t know anything about you.”
Gregory: “Are you afraid?”
Paula: “Yes, of happiness.”

Again, character development layered in. Paula is being portrayed as a weakling. Which enforces her powerful character arc by the time we get to the movie’s climax. You have to give your heroine a point to begin so she can fight her obstacles and grow. Both plot and character need arcs from A to Z. She tells him she needs to go away for a week to know what she is doing. He tells her that he has waited for her so long and he can wait a little longer.

In the next chapter-scene, we are on the train to Lake Como. In her compartment, Paula chats with an old woman who is reading a murder mystery about a man who marries a girl and has six wives buried in the cellar. reinforces the plot. The old woman reveals she lives in London, in Thornton Square. Aha!

“Do you know it? You know we had a real live murder there.”

The old lady then recounts the event: Ten years ago a famous singer named Alice Alcast was murdered. So now we know what was going on in that opening scene! It’s a good lesson for novelists on how to use ACTION to tell the backstory. In a novel, we would probably have our heroine THINKING/REMEMBERING what happened 10 years ago. Much more effective to find a way to convey this info in action/dialogue if you can

The train is pulling into Lake Como. Paula is agitated and the old woman tells her that traveling alone is dangerous and to be careful. foreshadowing. When Paula gets off the train, we see a hand clasp her sleeve. Creepy! The camera pulls back to reveal it is her lover Gregory. He tells her he has followed her to Lake Como.

They kiss as the train moves out. The final shot is of the old woman in the train’s window looking concerned. More foreshadowing.

New scene: In the villa, Gregory confesses he has always dreamed of living in a quiet house in London.

Paula: “I have a house like that, at 9 Thornton Square. That house comes into my dream, a house of horror. Strange, I haven’t dreamed of it since I’ve known you. I haven’t been afraid since I’ve known you. For years I’ve been afraid of something nameless. But I’ve found peace since I found you. I could even face that house with you. You shall have your dream, Gregory. You shall have your house in the square.”

The main characters have been well introduced. We sense that Gregory is a Bad Husband, but we are intrigued to know what he is up to. Poor Paula has to face the demons of her past by re-entering the murder house. It’s like we’re screaming at the screen of a slasher movie: DON’T GO IN THE BASEMENT! The stage is set.

New chapter: We are at 9 Thornton Square. Gregory pushes open the creaky door and Paula enters her dark house of horrors for the first time in 10 years, and says:

“Will you light the gas, please?”

Oh, indeed he will. The gas light works as a theme throughout the movie on many levels and images. Paula watches as the shadows move across the parlor of the gloomy room and says:

“It is all dead in here. The whole place seems to smell of death.”

She pulls off a dusty sheet from a grand portrait of her opera singer aunt as Gregory watches from the shadows. She whispers:

“It was there I found her, there in front of the fire, in front of her own portrait. I came running downstairs. She had been strangled.”

She gets distraught and says she can’t stay here. Gregory comforts her and says they will shut all the old furnishings away so nothing can remind her of the past. Make the house full of parties and life again.

And the set up is complete. The newlyweds begin to create a life together at 9 Thornton Square and though the aunt’s portrait is locked away in the attic, you know the ghost has not been banished.

Now, I’ve heard folks dismiss Gaslight as corny. But for my farthings, it’s an effective thriller and character study. The director George Cukor was labeled “a woman’s director” but he directed a couple sturdy noirs along the way including A Double Life with Ronald Colman as an actor who gets way too into his role as Othello and offs his ex-wife who’s playing Desdemona. But that’s for a Bad Husband for another day…

16 thoughts on “It’s A Gas! Things We Can Learn
From Good Openings In Movies”