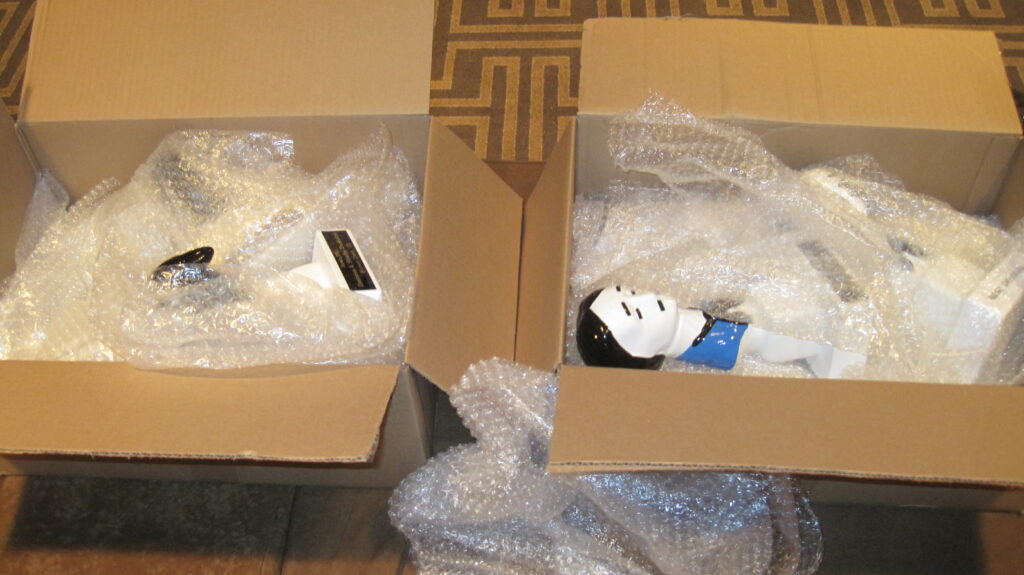 Edgar Awards waiting to come out of hiding last year.

I’ll be on a plane to New York when you read this. (Or maybe sitting in Charlotte…it’s not easy getting out of Tallahassee to the rest of the world). I’m off to my annual Edgar Awards duties.  I am the chair of the banquet, which is the easy fun part.  The hard part of Edgar duties is being a judge.

I’ve never been one but I did judge best first novel for the ITW Thriller Awards one year. Hundreds of books…they just kept coming.  In the beginning, it was a trickle but by June it was a deluge. Three-hundred-plus of them by Christmas. I grew to dread the sound of the FedEx truck.  And yeah, I read every one of them.  Not always to the end, I will admit. But I always gave each book at least 100 pages to find its legs before I assigned it to the “yes” or “maybe” or “not as good as maybe” pile in my office (actually, I had to end up also using the top of my baby grand).  Then I had to winnow the “yes” pile (I think it was about thirty books) down to five nominees.

One thing I remember was that all the “yes” books had a good opening. And you know, the principles I applied then to moving a book to the “yes” pile are the same ones I use when I critique one of our First Page submissions.  Sure, the published thriller writers had more craft over the course of the entire book than some of our submissions here, but the basic principles behind a good opening were the same.

Yesterday, I was putting together the PowerPoint for the Edgars. As usual, my attention was mainly on the visuals of the covers, which we flash up on a giant screen in the Grand Hyatt ballroom as the nominees as announced.  Here is what the Best Novels look like this year: 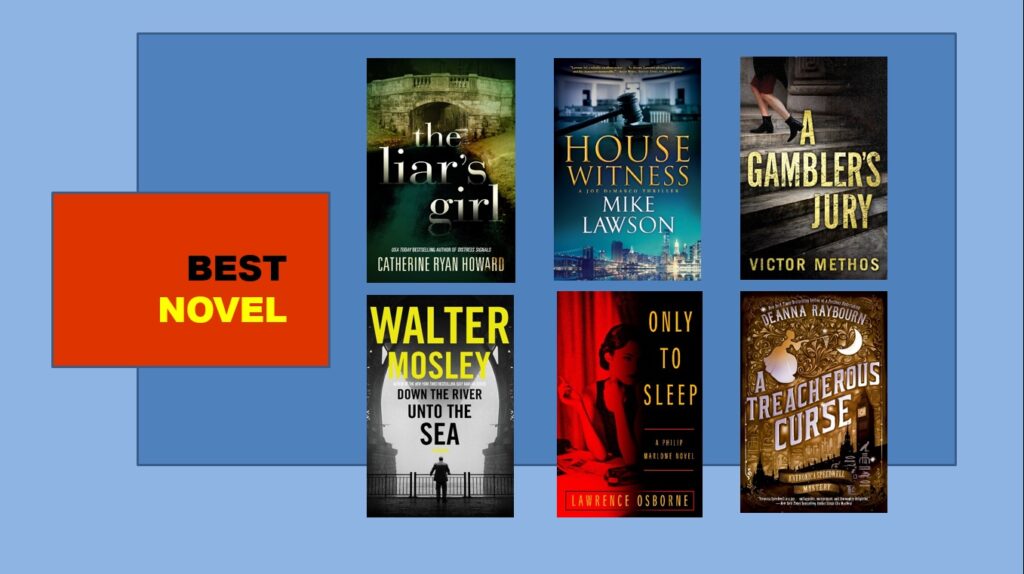 Nice covers, right? (You can see all the covers in every category on MWA’s Edgar website here). But then I got to wondering, what are they like inside? How do these writers handle the openings of their stories? Just for fun, I thought we could take a peek here today.

The stories include a legal thriller with a tortured heroine who’s fighting the government and her own demons; an Irish thriller about a girl who falls for a convicted serial killer only to find out ten years later he’s not what he seemed; a fixer whose client is a big-time politician with secrets someone will murder to protect;  a cop-cum-PI who’s trying to find the man who framed him and cost him his badge; a resurrection of the iconic Philip Marlowe, now 72 and retired in LA; and a Victorian adventuress trying to unravel of web of intrigue at an Egyptian dig.

Here’s the first page (not titled chapter 1, by the way), of Catherine Ryan Howard’s The Liar’s Girl. 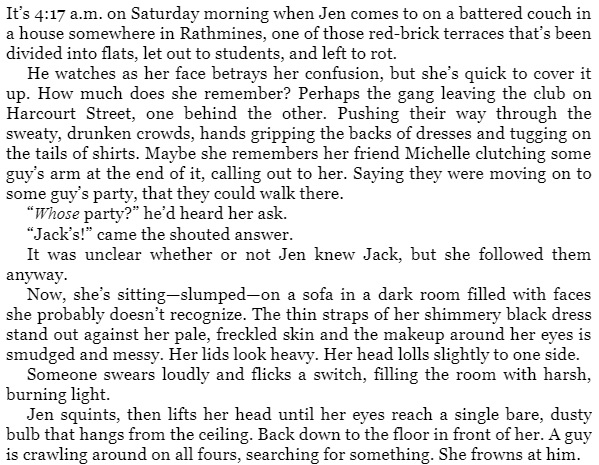 This is a tricky opening in that the writer is playing loose with point of view. In the first graph, it feels like we are in Jen’s POV, but by the second graph we realize we are seeing Jen coming to from the POV of the man watching her. This goes on for the whole chapter until she finally staggers out of the party room and he follows her. You just know he’s going to kill her. Or is he? There is a double-spaced scene break and then the title “will, now.” We are in the POV of a man named Will and very slowly we learn he is a patient listening to a radio broadcast about a girl who has been found dead in a canal. And he is concerned that this is related to something that happened to him ten years ago. Other chapters are titled “Alison, now” etc., which recalls the Rashomonesque structure of Gone Girl. You can read the full sample here.

Here is the opening, labeled Prologue, of House Witness by Mike Lawson: 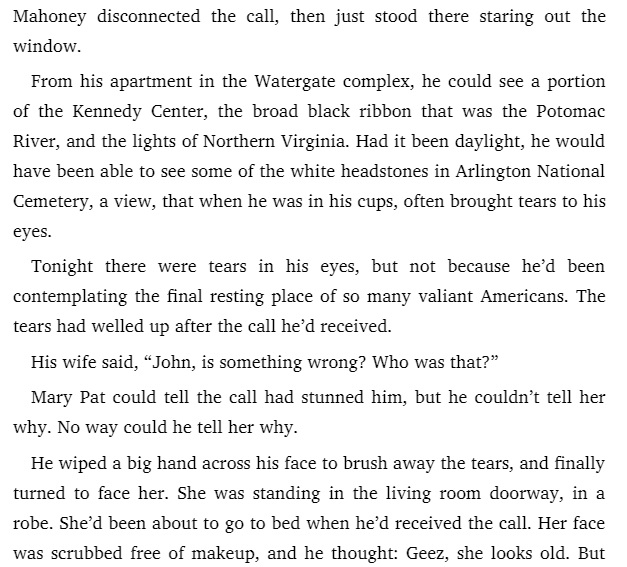 We get about a page more where he says he need to take a walk and his wife tells him it’s too cold and he’s had too much to drink but he insists on going anyway. Then comes this line to end the scene:

John Mahoney had just been told that his son had been killed — and his wife didn’t know he had a son.

Good kicker! The rest of the prologue is Mahoney on his walk, wherein we learn he is the disposed speaker of the House who had an affair years before with an aide Connie. After some extensive backstory, we learn the call was from Connie who tells him their son was shot in a Manhattan bar and berates Mahoney into making sure the dead son’s in-custody killer is convicted. Mahoney thinks about all the mistakes he has made and calls his “fixer” Joe DeMarco.  DeMarco calls back the next day and assures Mahoney the killer’s prosecution is a “slam dunk.” The last line of the prologue is “DeMarco was dead wrong.”  The chapter 1 goes back to the night the son was murder from the killer’s point of view. This is the 12th book in the Joe Demarco series. But because the Amazon sample is short, I don’t know when the protagonist DeMarco makes his entrance. Read the sample here.

Next up is Chapter 1 of A Gambler’s Jury by Victor Methos. 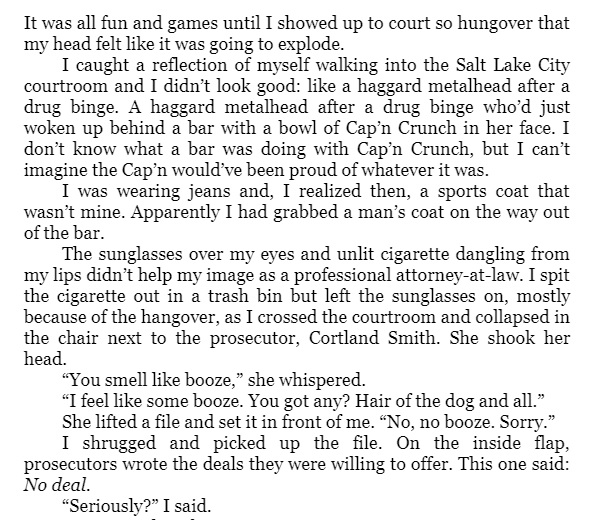 This scene is a classic introduce-the-protag opening. After this, she goes to see another potential client whose future is so dim, she advises him he should just pack up and high-tail it to Mexico. A brief Chapter 2 takes us to her office, until she decides instead to detour to a bar, where we meet her friend Michelle, the owner. In Chapter 3, it’s the next morning at her apartment where we meet another friend who is concerned about Dani’s lifestyle before Dani goes to another court proceeding.  You can read the sample here.

Now take a look at Walter Mosley’s latest, Down The River Unto the Sea. 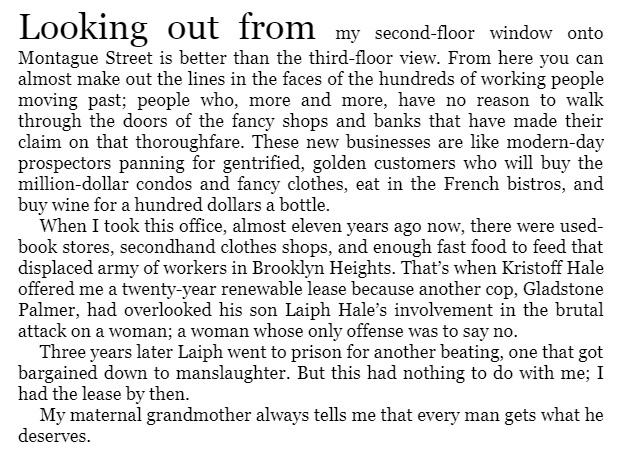 This first-person point of view narrative is from the protagonist Joe Oliver. He talks about how he’s too influenced by his sex drive and that leads us, after a double-space break to this sentence “Her name was Nathali Malcolm.”  (Nice bridge!) So with this type of opening we are firmly in intimate POV in what I suspect might be a cherchez la femme character-driven noir as only a master like Mosley can tell it.  Read the sample here.

Speaking of noir, guess who’s back? Philip Marlowe himself in Lawrence Osborne’s resurrection Only To Sleep. Marlowe is 72, retired, and swilling margaritas on his patio when two men walk in with a case that has the Marlowe name written all over it. Osborne’s opening, once it gets going, is redolent of night-blooming jasmine, gin, and that signature rude Chandler wit: 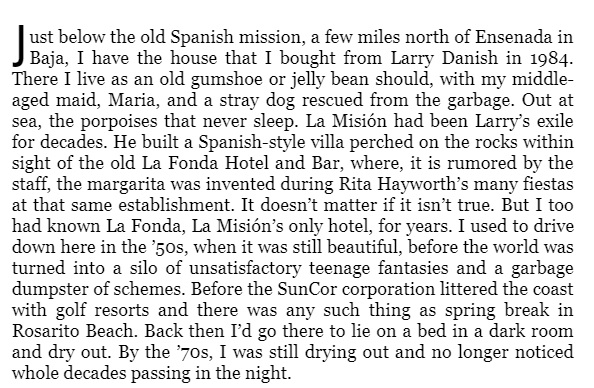 It’s a bit disconcerting to find Marlowe still taking cases from men who “smile with the small contempt of company men” in Reagan-era LA. But it’s fun and the voice is assured. Take a look here.

From Los Angeles in 1988 on to London in 1888. Here’s the opening of our final Edgar Best Novel nominee A Treacherous Curse by Deanna Raybourn:“ 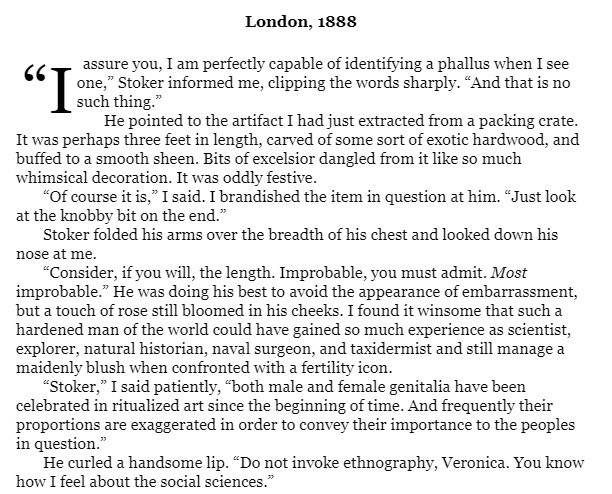 Now, if you’ve read my critiques before, you know I don’t like chapters that open with dialogue. This one is, ah, rather interesting. Not just for the sexual word play but because, I think, we get a quick bead on the personalities of our protagonist Miss Veronica Speedwell and her partner-foil Stoker. The chapter continues, after some repartee, with backstory about their partnership and how they’ve come to take on their latest case. The chapter is longish and leisurely in pace. Yet I was pulled in.  And I am not a regular fan of historical crime fiction.  You can read the sample here.

As I said, I don’t envy the task of judges. There were 595 entries in the Best Novel category this year. That’s a lot of reading and thinking.

So what do you think? Any openings here that would lure you in? I haven’t the foggiest idea who will win Best Novel this year. I never do. But around 10:30 Thursday night, one of these writers is going to be very very happy, holding court in the bar of the Grand Hyatt, clutching an ugly little porcelain statue.  Congrats to all the nominees. Well done. Here’s the full list.

20 thoughts on “First Page Critiques:
A Look At The Edgar Nominees”