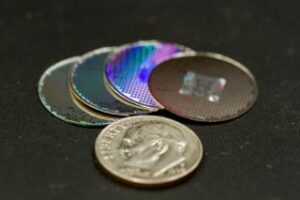 April has been quite a month for scientific events. Mark Alpert last Saturday discussed the recent presentation of an image of a black hole at the center of Galaxy M87 and gave us some insight, otherwise absent from most accounts, into the importance of what was revealed. Another attempted milestone which occurred this month was not as successful as the image presentation but was not entirely a failure, either. It is also extremely relevant to what we do.

I am referring to the crash landing on Earth’s moon of the SpaceIL Beresheet Lander. Lost in the disappointment of the Lander’s failure to achieve a soft lunar arrival was that 1) the Lander carried something named “The Arch Lunar Library” which 2) may well have survived the impact.  This particular payload is the first in a planned series of lunar archives prepared and maintained by the Arch Mission Foundation, a non-profit organization that tasks itself with maintaining a billion-year history of Planet Earth (this is done, I would guess, by people who, unlike myself, do not spend their time streaming Turkish crime series on Netflix). The Arch Lunar Library was preserved on something called “Nanofiche,” which is a disc-shaped medium as opposed to those flimsy cards of a similar name that spill all over the place when you try to get them into a reader at your local library without adult supervision.  Nanofiche will apparently last for thousands of years. The medium is so indestructible that it can probably be used to crush the last cockroach. Nothing damages it except for saltwater. It can outlast everything else, however, including, apparently, a crash lunar landing at otherwise destructive speed.

So what does the payload contain? Many, many things, including millions of images of pages of books: all sorts of books, fiction, non-fiction, how-to, what have you, books. It’s an ongoing project, so maybe a book that you are writing right now will be included in the future. I don’t mean to make you choke or anything, but there you go. Keep writing. Before you resume writing again, however, I strongly urge you to read the overview of the Lunar Library which will answer many of the questions I had, such as why someone was doing this. The article is a bit long, but it’s a quick read. It’s hair-raising in spots, but in a good way.

Happy Easter and Chag Pesach Sameach to all of my friends As Leonard Cohen said in a very different context, it would be a real drag without you.

16 thoughts on “First Books on the Moon”