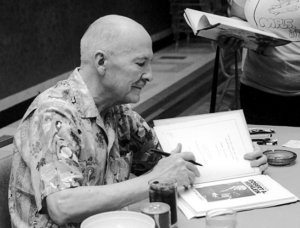 Recently, in our comments, TKZ regular Harvey Stanbrough made reference to Robert A. Heinlein’s “Five Rules for Writers.” They are as follows:

Rule One: You must write.

Rule Two: You must finish what you start.

Rule Three: You must refrain from rewriting, except to editorial order.

Rule Four: You must put it on the market.

Rule Five: You must keep it on the market until it has sold.

Rule One: You must write.

Pretty self-evident. You can’t sell what you don’t produce. The writers of Heinlein’s era all had quotas. Pulp writers like W. T. Ballard and Erle Stanley Gardner wrote a million words or more a year. Fred Faust (aka Max Brand) wrote four thousand words a day, every day. They did so because they were getting a penny or two a word, and they needed to put food on the table.

I always advise writers to figure out how many words they can comfortably write in a week, considering their other obligations. Now up that number by 10% and make that the goal. Revise the number every year. Keep track of your words on a spreadsheet. I can tell you how many words I’ve written per day, per week, per year since the year 2000.

Rule Two: You must finish what you start.

I remember when I finished my first (unpublished, and it shall stay unpublished) novel. I was still trying to figure out this craft of ours and knew I had a long way to go. But I learned a whole lot just from the act of finishing. It also felt good, and motivated me to keep going.

Heinlein was primarily thinking about short stories here, so the act of finishing was an easier task. With a novel, there’s always a moment when you think it stinks. When you wonder if you should keep going for another 50k words. Fight through it and finish the dang thing. Nothing is wasted. At the very least you’ll become a stronger writer.

Should a project ever be abandoned? If you’ve done sufficient planning and have the right foundation, I’d say no. If you’re a pantser … well, the temptation to set something aside is more pronounced. But you chose to be a panster, so deal with it.

Rule Three: You must refrain from rewriting, except to editorial order.

This is a bad rule if taken at face value. Again, Heinlein was thinking about the short story market. With novel-length fiction, the old saw still applies: Writing is re-writing.

I’ve heard a certain #1 bestselling writer state that he only does one draft and that’s it. Upon closer examination, however, that writer is revising pages daily as he goes, so it comes out to the same thing—re-writing.

As for “editorial order,” Heinlein meant that once a story sold—which meant actual payment—you made the changes the editor wanted (that is, if you wanted him to send you the check!)

For all writers, a skilled editor or reliable beta readers give us an all-important extra set of eyes. Don’t skip this step. There’s always something you need to fix!

Rule Four: You must put it on the market.

Which, for Heinlein, meant sending the story out to the pulp or slick magazines. Or, in the case of a novel, to the authorities within the Forbidden City of traditional publishing.

Today, of course, we have one major advantage Heinlein did not: self-publishing. But that option does not mean you don’t need to go through the grinder of making a manuscript the best it can be.

Rule Five: You must keep it on the market until it has sold.

Again, this was about the old world of magazines. When a manuscript came back, rejected, you got another envelope and sent it out again. The pages could get pretty scuffed up that way.

Today, the big questions for the writer are: a) should I seek traditional publishing, or self-publish? b) if traditional, how many rejections should I endure before publishing on my own? and c) if going indie, how do I know my book is ready?

Rule Six: Start Working on Something Else

That’s my own rule. I’ve seen too many beginning writers labor for years over a single story or novel. As soon as you’ve finished one piece, start on another. Don’t wait for the first story to come back from the editor you’ve submitted it to; get to work on your next project. (And if you find you’re experiencing writer’s block on your current project, begin writing something new — a real writer can always write something.) You must produce a body of work to count yourself as a real working pro.

So what do you think of Heinlein’s rules (and Sawyer’s addendum)? What else would you add?

41 thoughts on “Heinlein’s Rules for Writers”