I can’t read my novels when they’re hot off the presses. That’s when I see the parts that sag and the phrases I wish were more graceful.
But when I finally read Shop till You Drop, the first Dead-End Job mystery I wrote in 2003, it almost seemed like it had been written by someone else. 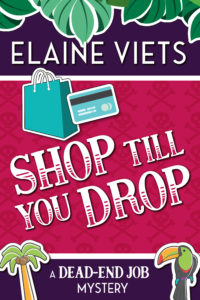 I had to reread all my Dead-End Job mysteries. I have four mystery series: the Dead-End Job series is a collection of funny mysteries set in South Florida. There’s the cozy Josie Marcus Mystery Shopper mysteries. Plus the Francesca Vierling newspaper mysteries. Right now, my current series is the forensic mysteries with death investigator, Angela Richman.
I am “backlist rich,” as my agent, Joshua Bilmes says. Joshua is president of the JABberwocky Literary Agency in New York, and he wanted to re-release my backlist. JABberwocky represents award-winning authors including Charlaine Harris, Brandon Sanderson, Toni Kelner and Tanya Huff, and has made books available from two dozen of the agency’s clients within its e-book program.
Done right, re-releases are expensive: re-releasing my 23 books in the Dead-End Job and Josie Marcus mystery shopper series can cost a solid five figures, and JABberwocky fronted the money. The novels will get new covers and fresh cover copy. We started with the first 13 Dead-End Job mysteries. Jenn Reese at Tiger Bright Studios designed clean, bright covers with a different symbol and color for each novel.
Meanwhile, I had to read all 13 Dead-End Job mysteries, and correct the small errors that happen when the files are converted to book format, plus the occasional typo. I was blessed with good copyeditors for this series, but one was crazy for semicolons. I have a deep, abiding hatred for semicolons in novels. They should be banished to term papers. I rewrote to get rid of the pests.
I recommend rereading your own work. I shouldn’t have waited 15 years. Reading your work will teach you a lot about your writing. Here’s what I learned: 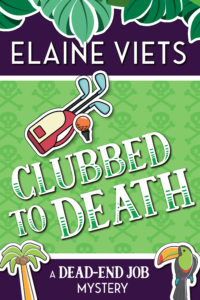 (1) I needed a bible. Not the Good Book, but a list of every character and place I used in the series. I never expected this series to last for so many books. How long did Helen’s deadbeat husband live off her without getting a job? In some books, it was five years. In others, it was seven. I settled on a biblical seven years. And Helen’s age ranged from 41 to 42. She became 42 forever. Even if you have a two-book series, start a bible.
TKZ writer Kristy Montee, one half of PJ Parrish, says she has a high-tech method: She keeps a handwritten notebook. “We started it with the first book. It’s a dossier with a page(s) for every character we have ever created. To be honest, it’s easier to use than a computer file.
“On Louis’s page, for example, we have such strange facts as:
“Foster father was wounded in left leg in Korea.
“Joined Ann Arbor PD Jan. 1981
“His badge number in Loon Lake was #127
“Got college girlfriend pregnant in Feb. 1980.
“Takes 3 sugars in black coffee.
“Refurbished his vintage Mustang in the book Paint It Black.
“We do this for every character. It’s saved us MUCHO grief.”
This is what I should have done. 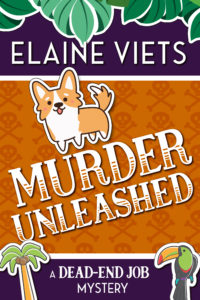 (2) I was overly fond of certain phrases. Never mind which ones – they’re gone. 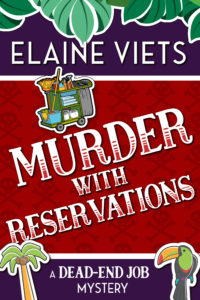 (3) I insulted an ethnic group. I described a Caucasian woman who’d had too many eye jobs as having “Chinese eyes.” More than one reader said that was insulting to Asians. They were right. Never mind that I didn’t mean to insult anyone. That phrase is gone. 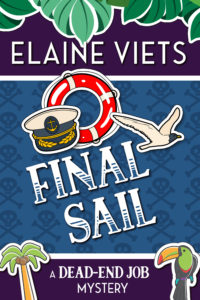 (4) The novels I thought were the best turned out not to be. I didn’t rewrite them – they got good reviews. But I learned another lesson: don’t overload the first few chapters with too much information. 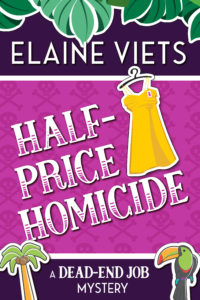 (5) Some lines made me laugh. In Clubbed to Death, Helen’s co-worker says this about their hated boss: “Her heart is as hard as her fake boobs.”
When Helen meets her future husband in Dying to Call You, she notices, “His nose was slightly crooked. Helen liked that quality in a man.”
The novels were wistful at times. In Murder with Reservations, Helen wonders, “How come when you finally got what you wanted, it wasn’t what you needed?”
After reading all the novels, I liked them. They’re mysteries with a sharp look at Florida life.
But from now on, I need to woman up, and get booking. I’m taking my own sharp look at my writing.

Thirteen Dead-End Job mysteries are being re-released as e-books by JABberwocky Literary Agency. Buy the whole set or treat yourself to the books you missed. Prices start at $2.99 and go up. Check them out here. http://awfulagent.com/ebooks/elaine-viets

34 thoughts on “Re-reading your work”