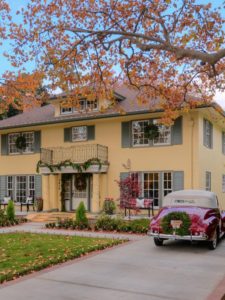 “Donna, get to this address for an interview.”

I took the note and asked my boss, JJ, about my current assignment. He made a throat cutting gesture and I gritted my teeth. Two weeks research shot.

“When is the appointment?”

“It’s all there.” He flapped his hand toward the scrap of paper.

The address was a magnificent Craftsman on the west edge of town. A tall, well-dressed man answered the doorbell.

My day went downhill from there.

Mr. Bonfiglio and I had an unproductive first meeting. He claimed the only chair in the room sized for a lady so I sat on a leather ottoman rather than sink into the matching overstuffed armchair. I didn’t fancy him looking up my skirt. My strategy backfired. Now I found myself in imminent danger of sliding off the slick footstool. The muscles in my calf spasmed into a charley horse and I feared I would sprawl on the floor if my high heel broke. Nevertheless, my precarious seat was an improvement over getting sucked into quicksand cushions.

Since JJ failed to provide the nature of the assignment, I decided to jump right in. I would either stay at the edge of the pool testing the temperature or swim laps with this man.

“What can I do for you, Sir?” Thanks, JJ , for sending me here with nothing to go on. Was I supposed to write a piece on this fabulous house? My fingers itched to click away at the prospect. I flexed my ankle to relieve the cramp and slipped lower on the side of the footstool.

While I uneasily treaded water, he studied me as carefully as a prospective car buyer looking under the hood. Did he wonder why I didn’t take the chair he offered? We silently contemplated one another as I speculated on his marital status. My post graduation goals were to establish my career, get married and start a family before I turned thirty.

Thus far, except for my job, my time had been wasted on warm up exercises. Inexplicably, I was seldom asked for a second date. At age twenty-eight I saw myself as a speed swimmer poised on the starting platform. The finish line painted with that magic number loomed closer each week.

Let’s start with the good, Anon. You do a terrific job in establishing that JJ, Donna’s boss, is a dou…um, jerk in just a couple of lines of dialogue. Donna’s interior dialogue tells us quite a bit about her as well, though perhaps a little early in the game.

Now for the rest. Let us begin with a few typos and then get to the meat of things:

— Also…”throat cutting,”  “room sized,” “post graduation,” and “warm up” should all be hyphenated. And…

As to the meat of things, as it were:

— The address was a magnificent Craftsman on the west edge of town. A tall, well-dressed man answered the doorbell.

I visualize a great big space between those two sentences, Anon, and you can help your story by filling it in. So the house where Donna is going is on the west edge of town. What town? How long does it take her to drive there? On the way, maybe Donna in her internal dialogue could tell the reader about the name of the company she works for, the nature of her job, whether JJ treats all of his employees so abruptly, and where she is in the company hierarchy. Perhaps she will be at her destination by the time she gives the reader that information. Donna at that point can give us more of a description of what she sees as she pulls up to Mr. Bonfiglio’s house. What is the neighborhood like? Does the house stick out or blend in? What is magnificent about it? Show us through Donna.

— Now I found myself…

Drop the “Now” and begin with “I.” Your narrative is in the first person past so there is no “Now,” only “Then,” and you don’t really need “Then” here, either.

— Mr. Bonfiglio and I had an unproductive first meeting.

Whoops. You’re telling the reader this at the beginning of the meeting. Accordingly, the reader already knows what is going to happen.  Show your audience that rather than telling them. Leave that sentence out, and show the reader throughout the meeting that it is going bottoms up, instead of saying so at the beginning. Let the reader share Donna’s agony as the meeting unfolds, and establish empathy with her. After the interview, you can have Donna thinking about it as she is driving away, something to the effect of,”

“Well, THAT went well!” I thought, as I drove back to the office (or home, or to her favorite tavern, or whatever).

Which brings us to:

— My post graduation goals were to establish my career, get married and start a family before I turned thirty.

Thus far, except for my job, my time had been wasted on warm up exercises. Inexplicably, I was seldom asked for a second date. At age twenty-eight I saw myself as a speed swimmer poised on the starting platform. The finish line painted with that magic number loomed closer each week.

This should all go somewhere else, such as after Donna’s meeting. You’re dropping it right at the beginning of her conversation with Bonfiglio and it brings everything to a halt instead of advancing things. The trip back to the office/home/wherever may also be a good place for Donna to review the current state of her life. When you do that, drop the word “(I)nexplicably.” Instead, why don’t you take a couple of sentences to have Donna describe her first dates and why she thinks they go well — shared interests with the person across the table, lots of shared laughs, the other party seemed interested and complimented her frequently — and then end the internal dialogue with Donna talking about waiting for the call that never comes. Communicate Donna’s befuddlement but drop a couple of hints that might indicate why she never gets a callback. Maybe it has something to do with her job, like constant complaints about her boss.

Also, the metaphor that you used for the state of Donna’s life isn’t quite appropriate. What you are describing — Donna’s goals, and time running out — would more appropriately be described by a ticking clock, or a fuse burning, or, to use your swimming metaphor, the lane getting longer, not shorter, since Donna doesn’t seem to be getting any closer to her goal. I also notice that you like to use a lot of swimming metaphors, Anon. I hope that you are going to connect those to Donna’s life in some way. Maybe Donna was on the swim team in high school or college, or maybe it is her favorite form of exercise of recreation. Either way, it makes for a minor but interesting element of her personality, one that would make her feel more relatable to the reader and could perhaps tie into the main plot later in Tatrice.

Just in closing…I’m having a bit of trouble getting a handle on what sort of novel Tatrice is. I’m not being critical. If I were browsing either in a bookstore or online and saw Tatrice there would be a cover, the inside front jacket flap, or a RIYL hint to help me along before I skimmed the first page. That said, I  am fairly certain that Tatrice is not a thriller, hard-boiled detective novel, or science fiction. I’m guessing that it’s a cozy, cutesy, chicklit, or romance assuming that, on page three, Donna doesn’t look down the street and see the Zombie Apocalypse approaching.  Since I rarely read the latter genres, please accept my comments concerning the substance of the book with that in mind.

I shall now move out of the way and attempt to be uncharacteristically silent while our friends out there offer their own thoughts. Thank you again, Anon, for submitting your work to TKZ’s First Page Critique!