Happy New Year! As promised, what follows is my account of meeting Fats Domino… 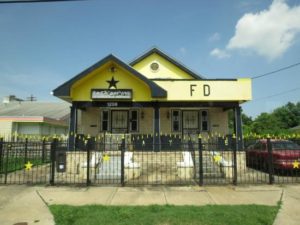 One of the first rock ‘n’ roll records that I recall hearing was “Blueberry Hill” by Fats Domino. I was blessed to have grown up in the 1950s and 1960s, when Top 40 radio was a wonderful mix of rockabilly, soul, rock, doo-wop, country & western, and r&b. It made for some exotic blocks of music — Everly Brothers followed by Barbara George giving way to Ferrante & Teicher and then Rick Nelson — but it was never boring. If you didn’t like a song, you just waited. You’d hear something you would like before too long. It was Fats, however, more than anyone else, who spoke to me. I had a friend (and he’s still a friend) whose older sister, LM,  had one of the best record collections I’d ever seen or heard at that point in time, and it included all sorts of Fats Domino 45s, many of which I’d never heard up until that point. We spent hours listening to them, particularly the ‘B’ sides, which were rarely played on the radio. I remember leaving his house one afternoon, my friend and me and another guy singing Fats’ infectious “I’m Gonna Be a Wheel Someday.” We were 10 years old at the time. We all got old, but the songs never did. 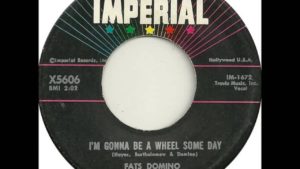 Fast forward to 1999. 45s had become a novelty, confined to limited pressing collector item releases. What were called “car phones” were being replaced by “cell phones” and “cell phones” didn’t have cameras or GPS or maps yet. The first iPhone would be released in eight years. Something called “google” was about a year old and something else called “wifi” was slowly making its way into the lexicon. Primitive times. November of that year found me in New Orleans on business. It was during this particular visit that I had lunch with a local musician who we’ll call J and whose extended family had for three generations been an integral part of the early days of rock ‘n’ roll. While we ate a couple of coma-inducing po’boys we talked about the city’s history. He looked somewhat askance at me a couple of times from across the table, expressing wonder at how a middle-aged white guy “not from around here” knew so much about his family and their musical contributions. The wonder turned to amazement when I took him back to my hotel room and played him some CDs of New Orleans music I had brought with me — iPods were two years away — which included recordings his relatives had played on but that he had never heard. We talked a bit more and were almost wrapping up when he said, “Hey, what are doing this afternoon? You got a car? You wanna go by Fats’ house?”

My answers were “nothing,” “yes,” and “hell yes.” It was a trip I had wanted to make on previous visits but given that the New Orleans street system — designed, apparently, by a spider on LSD — was daunting,  I had over the course of a few visits only slowly started to venture into the city’s neighborhoods and out of the French Quarter. So, yes, if J wanted to direct me to Fats Domino’s house — deep, deep in the ‘hood known as the lower Ninth Ward — I wasn’t about to pass up the opportunity. After a sinus-clearing trip on the freeway with J’s occasionally helpful guidance (“left…no…no, right…no…left…NO, RIGHT! RIGHT! RIGHT!”) through a heavy thunderstorm, we wound up driving down Caffin Street and approaching its intersection with Marais Street I saw what I was sure was the house in question on the right. It appeared to be a shotgun-style duplex, surrounded by a wrought-iron fence, with the words “Fats Domino Publishing” spelled out in lights on the front of the house.

When J had asked if I wanted to “go by Fat’s house” I assumed that he meant drive “by,” as opposed to “stopping.” And going in.  As we were um, driving by, however, J said, “Pull over there” pointing to a portion of the driveway which was in front of the house outside of the fence. I did. He got out of the car, then looked at me funny as I remained in the car, still not fully comprehending what was happening. He said, “C’mon!” and I did, turning off the engine and then stumbling a bit as I followed him. My brain and my body hadn’t quite synced up with the concept that I was walking into Fats Domino’s house. J in the meantime had negotiated the fence gate as the front door of the house opened. And there stood Fats.

I have often described myself as being too short for my weight (as opposed to weighing too much for my height) and such was certainly true of Fats. He had the appearance, as he stood there smiling shyly, of being compressed. Still very substantial at 5’4” and over 200 pounds, he nonetheless gave the impression of being possessed of a certain physical frailty. J introduced me as his “manager” (I wasn’t) and I shook hands with Fats (even as I write those words, I still can’t quite believe it) as he ushered us into his house. Please note: we were in Fats’ house, which was a combination annex and office. His HOUSE, actually, was next door, a huge place on Marais Street where he and his family (and several large automobiles) resided. The world-famous Cadillac Couch, however — a three seater fashioned from the tail-end of a Cadillac — was in the annex. Fats waved me over to it, saying something. I at that point in time was very unfamiliar with the New Orleans patois (which varies from neighborhood to neighborhood) and will confess that I couldn’t understand what he was saying. When I continued to stand there, however, he laughed and said, “Siddown!” I did. Carefully. He and J sat and talked for a bit — I couldn’t follow the conversation, but it was something about one of J’s relatives — and after about ten minutes they finished up their business. As we got up to leave, Fats shot me a smile and walked over to a beautiful piano, where he sat down, and then played and sang the introduction and opening verse of “Blueberry Hill.” It would be an understatement to say that he still had the magic. His voice was strong and his playing was complex, confident and flawless. It was if a switch had been flipped on inside of him when he sat down, releasing the muse entrapped from the reserved, seemingly infirm man with whom I had spent the past several minutes.  All I could think was, “I wish that LM were here.” 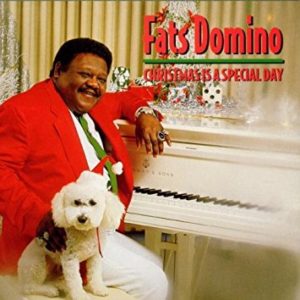 When Fats stopped playing I started to clap but he ducked his head shyly again and waved me off. J said to him, “Why don’t you give him one of those Christmas records?” and he did, handing me a copy of a disc titled Christmas Is a Special Day.  I thought later that I should have asked Fats to autograph it. I was still catching up, however, with what was going on and where I was, standing next to a man whose work I had been listening to for over five decades.  I had no way of otherwise memorializing it either — no camera or camera phone —  but that was okay. We said our goodbyes and I walked out of the “house” (as opposed to the “HOUSE”) into a world which was much different than it had been just a half-hour before. 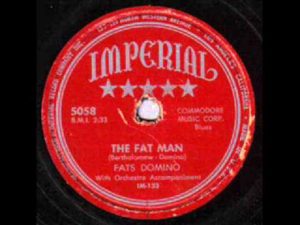 The world almost twenty years on from that day is also much different. One constant, however, is that Fats’ music remains timeless. His first single, “The Fat Man,” is considered by many to be the first rock ‘n’ roll record. Listening to it seventy years after its release one can hear Fats and the assembled musicians, under the direction of bandleader Dave Bartholomew, galloping into a previously uncharted musical territory. Then there is “I’m Walkin,” which, sixty years after its release, was licensed for a FitBit commercial. It’s a perfect pairing, given that one can’t sit still while listening to it. And of course there’s…but I need to be quiet and go away. I’ve prattled on too long. Anyway, that’s my brush with stardom. I’ve met a number of my idols since that time, but my meeting with Fats is in a class by itself. 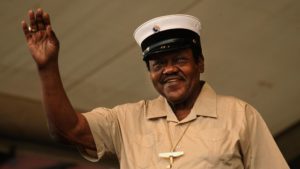 Your turn now. Have you had any meetings with a major and famous influence in your life that you would like to talk about? I am going to attempt to stay uncharacteristically silent while you inform us, but I can’t promise anything. Thank you.