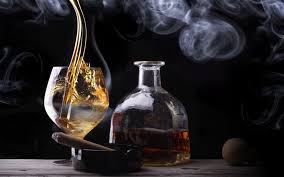 Good morning all.  We’re on a roll with First Pagers this week and now I’ve got another teed up and ready to go. Catch you on the back swing. (Sorry…husband is watching golf sudden death playoff in background as I write).

Revenge was like scotch. The longer it matured, the more satisfying the taste. Bradley Thomson’s stepfather taught him that.

Bradley walked through the opened French doors of his Key Biscayne home, coffee cup in hand, and stepped onto the lanai that overlooked the Bay. No matter how many times he viewed the Bay, he loved seeing the estuary in the morning. Its beauty pleased the poet in him. His younger self would have laughed at such sentiment. That was the benefit of middle-age. One appreciated the little things in life.

Bradley set his coffee on a bistro table, next to a throwaway cell phone. He picked up the burner and half-smiled. Out of respect for his late wife, he’d waited twelve years to make this call.

While most people craved instant gratification, Bradley savored anticipation more. He’d been known to admire the beauty of a 30-year-old Highland Park single malt for weeks, even months, before breaking the seal and relishing the first sip. The longer the delay, the better the satisfaction. That’s how he regarded the situation with Juliette. He doubted she’d recognize his voice after all this time, but to ensure she didn’t, for several weeks he’d practiced a Midwestern accent to camouflage his natural Bostonian.

Bradley took a moment to mentally recite his script. The words had changed over the years but their gist remained the same—one extortion to avenge another.

Two months ago, immediately after his wife died, Bradley thought about approaching Juliette in person. Although seeing her wither before his eyes would gratify the vindictive part of his nature, he decided a blind threat would be more menacing. If he remained anonymous, she’d never know which of her victims held her by the throat. He liked that.

When he heard her voice, fond memories of their nights together didn’t suddenly flood his mind. Her deceitfulness had murdered any chance of that.

Bradley smiled. “You can call me Mr. Boogey.”

I was thinking that maybe I’ve been doing too many critiques lately (recently judged a contest for MWA and read about forty entries of the first 50 pages and am also prepping for a workshop where I’ve asked attendees to send in their first 400 words.) So maybe I am going manuscript-blind-and-deaf.  But this entry, well, I think it’s pretty darn good. That sounds like a back-handed compliment to our submitter, so let me try to be nicer and more articulate.

First off, the writing is tight and fluid with only one hiccup (more on that later). Dialogue (what there is) is handled cleanly. No dumb typos, grammar lapses etc. But that’s the basics, the first bar to clear. What about the bigger issues?

We always talk here about picking the prime dramatic moment to enter a story. It need not be violent or action-packed. But it must do essential things — introduce a prime character (usually the hero but sometimes the black hat) and it must seduce us on some level.  A good opening is a promise to the reader — here’s a hint of what is to come so stick around and see if I, the storyteller, will deliver. I think the writer here accomplishes that.

I really like that first graph. We get a prime character’s name, a dollop of backstory —  he loves nice scotch, has a significant step-father in his past and is out for revenge of some kind. It has tone and voice…it has a certain “bite,” sort of like a good scotch. (I don’t drink scotch but during research, I once read an article about 50-year-old Glenlivet described as tasting like “tingle and burn.”)

The next graph is descriptive but also tells us where we are, about how old Bradley is, and a bit more about his personality. This submission is a good example of how to dribble in backstory. Then we find he’s using a burner cell phone, which SHOWS us rather than the writer TELLING us that he has secrets to hide and is up to no good.

Then he makes the call to Juliette, who we are told, with the sparest of details (good!) has a past with Bradley, apparently did him wrong, and now he’s out for vengeance.

But what I like about this submission the most, I think, are the Unanswered Questions. Sometimes, it is not so much what the writer tell us, but rather what s/he withholds that helps create a tension in the early going of a story. Look what questions this writer laid out:

What did Juliette do that was so awful that Bradley is now out to get her?

Why does Bradley refer to himself as one of her “victims?”

Why is he using an untraceable phone and disguising his voice? (and, backstory, we find out he’s Bostonian by birth.)

What happened to his wife?

And why has he waited 12 years to get his revenge?

One of the most effective ways to create tension early in a story is to lay down a bread-crumb trail of questions like this to lure us in and then you can spend the rest of the book slowly answering them. All these questions are a tease. They make me want to read on.

So good stuff! But I think we have a hiccup with the dead wife. Everything was going down so smoothly here until I got to: “out of respect for his late wife, he had waited 12 years to make this call.”  And: “Two months ago, immediately after his wife died, Bradley thought about approaching Juliette in person.”  I think by inserting the wife into the scenario with the named Juliette, the writer creates unnecessary confusion.  Might the opening not flow better if we left the wife out of things for now? She can always be brought up a little later, maybe after the phone call? It might create even MORE tension to withhold this bit of Bradley’s backstory until he has finished his call and then perhaps thinks about the “why” he had waited…something to do with a dead wife.

When you are laying down the questions, don’t double-dip them. The fact he has a dead wife and it probably has something to do with the nefarious Juliette is too juicy a fact to be buried amid the other backstory, I think. The dead wife deserves her own introduction. Just as an exercise, writer, take out all references to the wife and see how it reads. One woman at a time…

One last thing: Maybe it’s just me, but after all this good stuff about middle-aged Brahmin poets, great scotch, and Key Biscayne views, would Bradley pick a prosaic kiddie name like “Mr. Boogey?”  I almost laughed when I read it. Maybe there’s a good reason. Just asking…

Ready to hear some counter-views, TKZers.  Please weigh in. In the meantime, I have a habit of picking music for the movie versions of my books and those of others. Here’s some mood music for today’s submission. Hit it, Charles…