If the wine is sour, throw it out. — Michelangelo

Have you ever wanted to just say the hell with it and give up?

I have. I’ve been publishing fiction in one form or another since 1980 and I can’t count the number of times I have wanted to pack it in and go drive the cart at the airport for a living. Sometimes it was a bad editor who brought this on. Or being dropped from a publisher (twice). Or doing too many book signings where the only people who showed up were the staff and a homeless guy trying to get out of the rain. Or being caught in the dreaded Barnes & Noble Death Spiral. (this is an official term for the dynamic of mediocre-sales-so-we-won’t-stock-you-but-no-way-to-increase-sales-because-we-won’t-carry-your-books.

Or sometimes it was simply because I thought I had run out of energy or worse, ideas. But maybe the worst kind of giving up is the one where you have invested a lot of time and energy into a book and there’s this little voice inside your head whispering, “This is pure crap.”  And you know the voice is telling you the truth.

When is it time to give up on a story and start over? 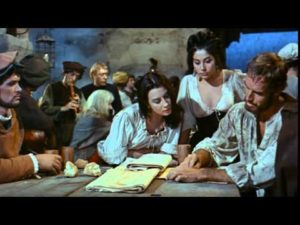 Michelangelo is the one who got me thinking about this. Or actually, Charleton Heston. Last weekend, my bad cold had me mainlining old movies and I happened upon The Agony and the Ecstasy.  Charleton Heston as the artist and Rex Harrison as the pope who commissions him to paint the Sistine Chapel. Good movie, based on the bestselling novel by Irving Stone. Michelangelo is maybe a couple hundred feet into his backbreaking project but he’s haunted by self-doubt — especially over the fresco he has painted depicting the face of God. He retreats to a tavern, where he sketches the peasants as models for apostles. But it’s God’s face who taunts him. Michelangelo takes a drink of wine, spits it out and yells, “This wine is sour!”  The tavern owner tastes it, agrees, and uncorks the cask onto the floor, saying, “If the wine is sour, throw it out!” 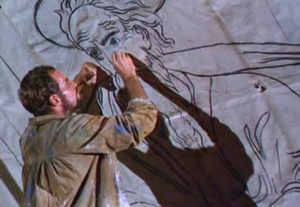 Michelangelo has his epiphany. He goes back to the chapel and takes a scythe to God’s face, scraping it off.  A year of work demolished. He starts over.

If the wine is sour, throw it out.

Flashback to 1998. I am writing my first attempt at a mystery. My first chapter opens with a Miami homicide detective sitting in a fishing boat in the Everglades. She is thinking…mourning…remembering…her husband who got blown up in a drug deal gone bad. Do you see the problem? She is thinking. She is…doing nothing. If you don’t get it, go back into TKZ archives and search for any of James Scott Bell’s posts on characters thinking and not doing.

I finished that first book and sent it out to agents. I got oh, maybe twelve rejections. Not one agent was kind enough or smart enough to tell me what was wrong. I tossed the whole book and started over. About two years later, the first book in the Louis Kincaid series got published. (For the record, it opens with Louis unearthing a shallow grave in rural Mississippi and finding a skeleton with a rotted noose around its neck).

Okay, flash forward to now. After our book She’s Not There was published last year by Thomas & Mercer, they asked to see a sequel that centered on a subplot featuring a secondary character named Clay Buchanan. Six chapters poured out of my laptop. I was on a roll.

Then this little voice started whispering. I ignored it, plowing on through a hundred pages. Finally, I went back and re-read Chapter 1.

I had opened with my protagonist Clay Buchanan sitting in a boat in an Arkansas bayou. He is a skip tracer by trade but also an avid bird-watcher.  He has come looking for a woodpecker that’s supposedly extinct. But he is thinking about his wife and infant son who disappeared ten years ago. This quest is supposed to a metaphor for his hopeless search for something lovely that he knows is really dead. Beautiful chapter, full of poignancy, dripping with Spanish moss and symbolism.

You’d think I would have learned something in twenty years.

Yesterday, I threw it out, all hundred pages.  It took me five months to get to this point. That’s a lot of wine on the floor.  But it had to be done. The idea for the book is solid but the first five chapters are not working. I knew it in my heart.

Why do we resist starting over? Well, after twenty years, I’ve got my thoughts.

Deadlines: It may be an actual contract deadline, or one you set yourself (I will finish this book by July! I will write 1500 words per day!) It is also the pressure of our genre, the idea that you won’t get noticed or survive unless you can produce good books at a steady clip.

Self-doubt: This can be bad because it can eat away at your soul. (I’ll never get published. I can never write as well as fill-in-the-blank. I’m out of good ideas.). But self-doubt can be good because it forces you to slow down, reassess and reflect. When things look dark, sometimes it’s not a bad idea to pump the brakes so you don’t drive off the cliff. If your novel is going badly, you might need to set it aside, let the frustration cool, and go back later. Divorce or reconciliation? It’s easier to decide with a clear head instead of a heavy heart.  Some books can, with hard work, be saved. Others have to be abandoned.

Negative people: This can be bad because sometimes you have to literally live with these folks. Your spouse might not be supportive enough. Your friends might tell you your wasting your time. Your “real” job screams at you like a harpy. But it can be good if you’ve got someone in your life who can, with a clear critical eye and kind heart, tell you when your book has lost its way. All of us want praise. But what we really need are folks –a trusted beta reader or a good critique group — who will tell us “This ain’t working.”

Now I can hear some of you saying, “Okay, that’s the agony. When does the ecstasy kick in?”

I can’t say. It’s a personal thing. Each of us handles disappointment and defeat in his or her own way.  I can only say that once I made the decision to throw away the first hundred pages of Clay’s story, I felt…good.  Like Michaelango, I had a clean white canvas again. I’ve been here before. I can do it again. I’ve only got, oh, about 100,000 words to go… 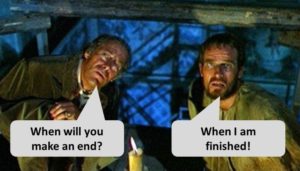 30 thoughts on “The Agony and Ecstasy of Starting Over”