A few days ago, after a brief but welcome rain shower washed the choking wildfire smoke from the Big Skies of Montana, I visited a friend’s cherry orchard on Flathead 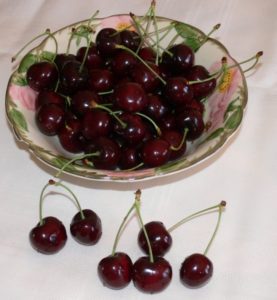 Lake. Because a glut on the market resulted in low prices, tons of fat glossy sweet cherries remained unharvested on the trees. As I walked among the heavily laden branches bowing to the ground, a cliché popped into my head:  low-hanging fruit.

According to John Bagnell, “Low hanging fruit is often cited as an example of vacuous business-speak, typically used by marketing folk to refer to easy targets or readily-attainable objectives. It’s generally considered to have come into use in the early 1990s, quickly reaching cliché status during the middle of that decade.” 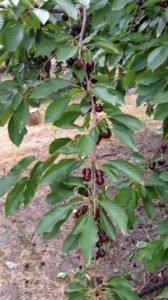 One wonders how many Madison Avenue businesspeople ever stood in an orchard, shoes stained deep red, and gathered fruit by handfuls.  If they inhaled the scent and tasted the juicy burst of sweetness when they bit into a perfect cherry that was so ripe it fell from its stem, would the connotation of the phrase be as cynical and disdainful?

Moving from business to music:

Life is Just a Bowl of Cherries was written by Ray Henderson and Lew Brown, and performed in the Broadway musical Scandals of 1931. The song became a hit when crooner Rudy Vallee recorded it. During the height of the Great Depression, fortunes evaporated overnight and banks closed with people’s life savings never to be recovered. The philosophy expressed in the cheerful-sounding song was: why bother to work and save when everything can all be gone in an instant.

The expression later morphed into a way of saying life is great, but was often used with the ironic undertone that life is anything but great. 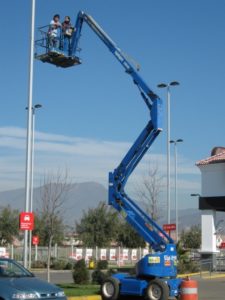 Cherry-pick is an idiom used across diverse professions, trades, and sports. It’s defined by Merriam Webster as an intransitive verb meaning “to select as being the best or most desirable.” It entered the lexicon in approximately 1965.

In law, cherry-picking means: “suppressing evidence, or the fallacy of incomplete evidence is the act of pointing to individual cases or data that seem to confirm a particular position, while ignoring a significant portion of related cases or data that may contradict that position.” (Wikipedia)

In basketball, soccer, and hockey, a cherry-picker is a player who hangs around the opposing team’s goal, waiting for another player to pass the ball or puck so he can make the easy shot. This opportunist capitalizes on other team members’ hard work at defense, snatching credit for the points.

In construction, Raymond Corporation, a material-handling company, defines a cherry picker as “a hydraulic crane with a railed platform at the end for raising and lowering people.” The lift is employed in building, roofing, window washing, utility pole maintenance, and other jobs requiring a worker to be raised high off the ground.

And of course . . . there’s the vulgar frat boy terminology: a cherry picker aspires to seduce virgins.

Who could forget the entreaty from our childhoods — “Pretty please, with a cherry on top!”

Even young children understand the metaphor their parents use to teach good manners: an ice cream sundae, chocolate sauce, whipped cream, nuts, and the final embellishment, a cherry on top. When kids really, really want something, they plead, wheedle, and add the cherry to emphasize their sincerity.

Sugar is sometimes substituted for the cherry, as in the 1994 film Pulp Fiction. “Cleaner” Harvey Keitel orders “hit men” John Travolta and Samuel L. Jackson to dispose of a dead body and clean up the evidence. Because Travolta wants to be treated politely and respectfully, he protests Keitel’s brusque rapid-fire orders. The scene ends with Keitel’s immortal quote, “Pretty please with sugar on top, clean the f**king car.”

Many food idioms lost their punch as western culture has moved away from an agrarian society. How many people in today’s urban environment truly understand the inspiration for the following

What about “corny”? How did that expression get started?

According to FUNNYPHILLO: At the beginning of the 20th century, seed companies in America started sending out catalogues to the farmers to advertise their goods. To spice up the catalogues, they would sprinkle jokes and cartoons throughout the pages. The jokes on the pages were of low quality, and the catalogues started to be known as “corn catalogue jokes”, which was then shortened to “corny”, and eventually applied to all humour considered embarrassingly unsophisticated.

Now if you’ll excuse me, there’s a bowl of Flathead cherries in the refrigerator calling to me.

TKZers, what is your favorite food expression and why?

Debbie Burke can be found munching in her garden while awaiting publication of her thriller Instrument of the Devil by Kindle Press.

16 thoughts on “LIFE IS JUST A BOWL OF CHERRIES”