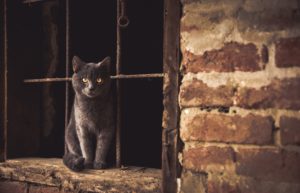 I was driving very early on Friday morning down some slightly foggy, all but deserted streets of a section of my hometown known as the Short North. I was doing someone a favor, picking them up at the ungodly hour of 0-dark-forty to transport them to the city Greyhound Bus Depot so that they could catch a 5:00AM ride that would eventually drop them to New York. As usual, I was obnoxiously early, arriving a quarter hour before the agreed time; knowing that my prospective rider would be  late by about fifteen minutes I drove around a bit in the general area around their residence so that I wouldn’t be sitting idling in front of their apartment building in a no stopping zone.

I spent as a wee lad a number of Saturdays in a building on the outskirts of that neighborhood, long before the well-gridded streets which were then called “slums” became gentrified. My father managed the local branch office of a truck leasing company and for some reason believed that a regular Saturday trip to his office would encourage me to follow his example, instead of stirring up my inner brat resentment caused by my preference for Saturday morning television.. The office in the 1950s was full of cigar smoke — one of the company’s salesmen had a penchant for stogies — and absent of television, books, comics, or magazines. There wasn’t much to do. I was too young to do a credible brake job on an eighteen wheeler (and remain so to this day!) and as a result I spent most of my time hanging out in the garage listening to the mechanics tell jokes, some of which I understood but most of which I didn’t.  While most of the commercial buildings in that area have been torn down or rehabbed into tony apartment complexes or flavor of the month taverns that change owners, names, and identities every eighteen months, the structure which housed my father’s old office building still sits there and is still used for its original purpose by a different company. I like to drive by there when I am in the area. Sometimes I can almost imagine that I see my six year old self staring wistfully out of one of the office windows onto the street, yearning for escape. The primary attraction in my adult life, however, is the reminder that I don’t have to stop there and can go wherever I want whenever I want, rather than spending five hours in the building on a Saturday trying to figure out ways not to get into trouble. I guess my inner brat still resides within me. Age is also a factor. I was told by an elderly friend, shortly before he passed, that aging is like living in reverse: people start treating you like a child, taking away privileges and objects (like car keys and credit cards) and restricting your activities. Sometimes I need a reminder of what I have now, and what may be lurking ahead. Driving past that old office building helps.

I accordingly decided to kill some time by doing just that. Nothing much had changed from my last brief visit at the beginning of summer. I drove by slowly, looking for the ghost image of my young reflection, when I saw a quick movement out of the corner of my eye. I faced forward and quickly slammed on the brakes. A large tabby cat had picked that moment to dart in front of my slowly moving car. I didn’t hit it, which was good for the cat, but bad for the reason for its haste: it had a large rat in its mouth. The rodent’s anterior and posterior parts were draped resignedly over Garfield’s right and left jaws, riding up slightly on the kitty’s lower canines. The big hunter obviously wanted to get back to base and enjoy the meal before the adrenaline dissolved. Adrenaline in a prey animal’s bloodstream is like chocolate to a predator; it makes everything better. I watched the big hunter scurry off into the darkness and wished him godspeed.

Longtime Saturday morning visitors to The Kill Zone know that I love metaphors. I’ve been thinking about that cat all day, with the cat as the writer, the rat as the story, and the hunt as the idea. You’re the cat. Chase that idea down. Don’t let it go. If you do it just might scamper away, never to return. It might even be caught and eaten by someone else. Don’t fall into the old “no one will want to read this” trap of giving up on your concept before you’ve even tried to write it. All you will see is a blank expanse of page. All you will hear is the sound of wheels spinning. Unlike six-year old Joey, you can control your destiny. Put both hands on the keyboard and go where you want to go. Oh… if you’re driving, keep your eyes on the road. And when you cross the street, look both ways first, no matter what you are carrying, or how delicious it might be.

As always, I’m curious…what was your least favorite adult-imposed task that you remember from your childhood? If you are inclined, please tell us what, and why. It might be a good starting place for something bigger. Thank you.