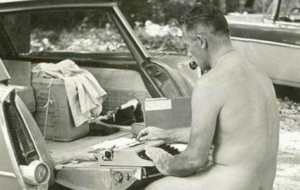 Writing is a socially acceptable form of getting naked in public. — Paulo Coelho

So there I was, sitting on the sofa in my old sweat pants and my Bob Seger Get Out of Denver tour t-shirt and things were going south fast.  Actually, they weren’t going south. They were going nowhere.  I was mired mid-scene in a chapter about halfway through the WIP.  Getting no traction. Feeling hopeless. Ready to give up and go watch Shark Tank.

Then I had an idea.  All I needed was a change of habit.  It had worked before. Back when I lived in Fort Lauderdale, I would pack up the lap top, hitch a ride on the water taxi and go to my favorite coffee bar or bar, depending on the lateness of the hour and the depth of my desperation.

But I live up in northern Michigan now. And we were in the middle of a chilly-for-August two-day rainstorm. I had to improvise.  So I combed my hair, slipped into a leopard print lounging robe and locked myself in the bedroom, without the dogs or the TV remote.

It didn’t work.  But the bad patch did get me to thinking about writing rituals, and the weird things we writers do to prime the pump. 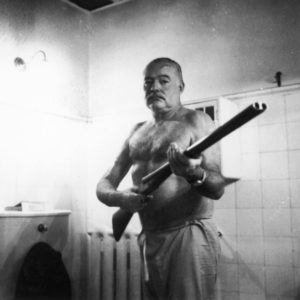 Lots of writers have resorted to going buff when blocked. Hemingway, it is said, wrote naked standing up at his typewriter, which I can somehow see (but unfortunately can’t un-see). James Whitcomb Riley had his friends lock him up naked in a hotel room with only pen and paper, so he wouldn’t be tempted to go down to the bar.  Victor Hugo, when facing a killer four-month deadline, had his servant take away all his clothes. He bought one bottle of ink and huge gray shawl, so he couldn’t go outside.

I’ve tried other things to get the juices going.  Usually, I go for a long run. Clears the brain and you can write dialogue while you pound around. I’ve relocated to places without internet. Once, when my sister Kelly and I were struggling with an early book in the series, we rented a tiny cottage near Hot Springs, Ark. Faced with nothing but each other’s voices and the whine of mosquitoes, we got a lot done. I would do this all the time if I could afford it, though not in rural Arkansas again.

Jonathan Franzen wrote The Corrections in a rented office, stripped of all distractions. He used an old Dell laptop  that had no wireless card and a blocked ethernet port. I prefer how Maya Angelou does it. When writing, she checks into a hotel room every day, taking legal pads, a bottle of sherry, playing cards, a Bible and Roget’s Thesaurus. She writes twelve pages before leaving in the afternoon, then edits the pages that night. 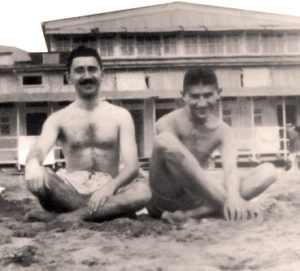 The weirdest ritual might have belonged to Franz Kafka. Every time he got ready to write, he would first do ten minutes of what was called the “Müller technique” — a series of swings, stretches, and body-weight exercises. After he was finished writing, he did another ten minutes. Did I mention that he did this naked?

Water is supposed to enhance creativity, they say.  And lots of famous folks wrote in bathtubs, including Agatha Christie, Mark Twain, Edmond Rostand, and Ben Franklin, who also liked to take what he called “air baths,” where he’d sit around naked in a cold room for an hour or so while he wrote.

Woody Allen, on the other hand, is strictly a shower guy, telling interviewer Eric Lax:

This sounds so silly, but I’ll be working dressed as I am and I’ll want to get into the shower for a creative stint. So I’ll take off some of my clothes and make myself an English muffin or something and try to give myself a little chill so I want to get in the shower. I’ll stand there with steaming hot water coming down for thirty minutes, forty-five minutes, just thinking out ideas and working on plot. Then I get out and dry myself and dress and then flop down on the bed and think there. 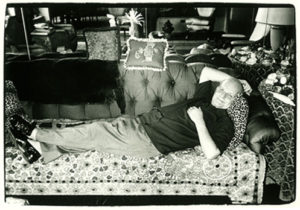 I am writing this post today lying in bed. Lots of famous writers wrote in bed — James Joyce, Proust, Twain, and one of my favorites, Truman Capote. “I am a completely horizontal author,” Truman Capote told The Paris Review. “I can’t think unless I’m lying down, either in bed or stretched out on a couch and with a cigarette and coffee handy.”

William Styron was a real piker. He would sleep until noon, then read and think in bed for another hour or so before lunch with his wife at 1:30. He finally got around to begin writing about four.  I can relate.

But let me get back to my own problems with that recalcitrant chapter. How did I finally get going again? What was the magic ritual that unlocked my creativity? There wasn’t one. After four frustrating days of typing, deleting, typing, deleting, I finally printed out the chapter and took it to my favorite watering hole here in Traverse City, Sleder’s Travern.  I ordered one glass of wine and sat there and just read.

It took maybe half a glass for me to realize what was wrong. It wasn’t my ritual. It was my unwillingness to be naked. I was at a crucial point in the story when my character was facing what our own James Scott Bell called the Man in the Mirror moment, and I was pulling my punches. I was holding back emotionally in what should have been a really emotional point in my story.  Maybe it was a fear of being sentimental. Maybe it was because I didn’t truly understand what had brought my character to this point. But for some strange reason I was holding back.  And as Anne Rice once said, to write you have to risk making a fool of yourself.

It took me another week  to get that scene right. But it’s there and it’s what it needs to be now. Sometimes, you gotta get naked.

Oh, I should finish telling you about what happened to Victor Hugo.  He completed his book weeks before his deadline.  He used up the entire bottle of ink. He thought about calling his book What Came Out of a Bottle of Ink, but eventually came up with a better title — The Hunchback of Notre Dame.