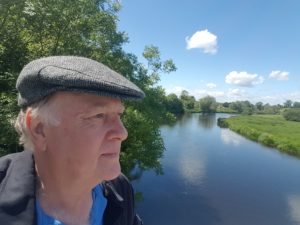 JSB at the River Boyne

The Bells were a turbulent Scottish clan that stopped throwing rocks at their enemies long enough to move to Ulster during the great Scot migration of the 1600s. After several generations in Ireland, one of us, William Bell of County Armagh, decided to give America a whirl, landing in Philadelphia in the mid-1700s. From this line your humble correspondent emerged in the far-off land known as Los Angeles.

A couple of weeks ago I went with my wife and daughter to Ireland, to see what I could see. I thought I’d share a bit about the trip, and how it relates to writing.

Since we really wanted to get to know the place, we decided to rent a car and drive around the island.

Which meant driving on the left side of the road.

Do you know how hard that is for an American? Especially on these twisting former bridle paths they have the temerity to call roads. My wife was constantly saying, “Too close!” as I consistently veered toward the shoulder. That’s because I was trying not to get hit by the oncoming vehicles, several of which were TOUR BUSES. These behemoths didn’t even slow down and took up every bit of space between lane line and whatever was on the other side: stone wall, grass, dirt, the occasional cow. Driving in Ireland feels like a 300-pound man going cave spelunking. I survived the ordeal through a combination of quick reflexes and sheer terror.

Which is how writing should feel sometimes, yes? If you’re never a bit scared of what you’re writing you’re not going far enough. And just like these automotive jaunts brought us to a new and wonderful location, so too will your risky writing take you to story stuff you would have missed otherwise.

My favorite part about a research trip is walking around, listening, seeing, drinking it all in. Speaking of which, the pubs were a delight. Like at the wonderful Sin é in Cork. Here’s a bit of it:

Our barman, Tony, welcomed us with a big Irish smile and was more than happy to offer some tips on seeing Ireland. “Don’t do just the tourist stops. Stop in the little towns and villages and walk around during the day. Then go to the pubs.”

So when we walked around, I looked around. Some of the things I noticed:

Irish eyes really do smile. I saw some of the most gorgeous eyes on the lasses, and dancing eyes on the lads. There’s an old saying that a fellow has “the map of Ireland on his face,” and it holds true. There’s a distinctive Irish look, especially on the men—the kind of face you can imagine with a pipe, regaling you with a story about the banshee or the little people.

I found something else to be true: the Irish love to talk. There were a couple of occasions when we needed to get on the road. But an inn keeper here and a villager there kept up with friendly gab. We’d probably still be in Ireland if, on our last morning there, I hadn’t grabbed old Aidan’s hand (“I worked thirty-five years for Aer Lingus. Then was in Mozambique and oh, that was somethin’ all right …”) and said, “Thanks, but we’ve gotta run.”

We Americans always gotta run, which is the source of some amusement to the Irish.

Lesson: Lap up the sights, sounds, and smells on your research trips—and especially listen to the people.

Find the Gold in the Obstacles

My favorite encounter occurred by way of an inconvenience. Our rental car started acting funny, and the key card had a “low battery” warning. Luckily we were near the Kerry airport and went in for a word with the Hertz man. Who was not in his trailer. (Kerry airport is about the size of an elementary school playground.) So I went next door to see the Avis man, who told us the Hertz man should be back “in a bit.” It was more like three bits, but he finally arrived.

The Hertz man made a call and told us, “Go out the exit there and turn left and go to the top of the hill. Turn left again and go until you see a shop on the right. On the other side of the shop you’ll see a sign for Tom Murphy’s place. He’ll fix you up.”

Dutifully, we followed the directions and pulled into a dirt yard full of haphazard cars, piles of old tires, and a couple of trailers from a 1959 surplus sale.

No one was in either trailer. Then from an old house next door came the biggest Irishman I’ve ever seen. Think Hagrid from Harry Potter, only with a haircut. He also had the thickest Irish brogue this side of Barry Fitzgerald. And he talked fast. So after replacing the key battery and test driving the car he rat-a-tatted, “No worries about the motor andlikethatyasee? If there’s somethin’ wrong with the motor ye’ll see a yellow light andlikethat, yaknow? But if ya don’t see it it’s no worries andlikethat, okay?”

Okay! I wasn’t about to argue with the man.

Which is to say, the best part about research for me is finding something unexpected and delightful, which often happens when you meet an obstacle and are forced to push through it.

Times Are Always Tight For Poets 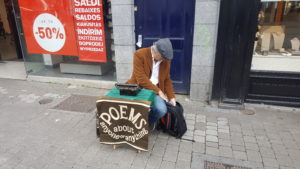 In Galway, we strolled along Shop Street, known for its (shockingly) shops. We really wanted to see the much-touted buskers, but I have to say the fare was, this day, disappointing. Several single acts (guitar, sax), and one fairly good trio. I was hoping for somebody like Dick Van Dyke in Mary Poppins. Now that’s a busker.

Anyway, toward the end of the street, we came upon a poet, with his little table and typewriter, offering to write a poem about anything upon request. Saw no one take him up on it, and then it began to spit rain. The poet had to gather up his things and run for cover.

Lesson: write poetry for fun, not profit, and bring an umbrella.

There is much more I could tell you about the trip, but I fear I’d end up like that friend who comes to dinner with 500 slides of his visit to Sri Lanka. Instead, I’ll leave you with one of those happy occurrences that come when you least expect it. It’s a title.

That car I told you about? Well, it went fritzy (yasee?) in the tiny car park in Galway (tiny car parks are all they have in Ireland. One false turn and you scrape off your side-view mirror). The car would not start. So I called Hertz, who called roadside assistance, who sent out a couple of fellas who arrived about forty minutes later. One was a squat, bald bloke who looked a bit like Michael Chiklis. He was chatty and charming, asked where I was from. I said, “Los Angeles,” and he said, “Oh, posh! Beverly Hills and all that!” I merely smiled, as I wanted him to get to work.

The other fellow was a tall red-headed lad in a rugby shirt. He was the serious one, told the chatty fellow to pop open the bonnet and try starting the car. It chugga-chugged but didn’t turn over. Rugby Lad fiddled with something and told the guy to try it again. It started. They stopped and started it one more time.

“Should be all right now,” Rugby Lad said. And with a wave and a smile from the jolly bald fellow, they were off.

I summoned my wife and daughter, who were waiting at a nearby restaurant. When they joined me my wife asked what had been the matter. I told her it was something about the injection system.

“Do you know what to do if it happens again?” my wife sensibly asked.

To which my daughter, sitting in the back of the car, said, “Out of context, that sounds really strange.”

We laughed. But I did have my title: I Saw Where He Jiggled: My Trip to Ireland.

So what’s a serendipitous event that occurred during one of your trips, research or otherwise?

32 thoughts on “Writing Lessons From Ireland”