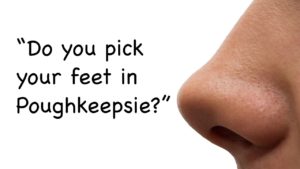 Here is another in our series of first page critiques. This one presents an important craft issue which I’ll discuss on the flip side.

He stood with his back to the doors leading to the balcony overlooking Lake Waco. His eyes remained focused on the 9mm Glock in the hand of Deputy U. S. Marshal Seth Barkley.

“What do we do now?” asked the blond-haired man. “Is this the part where you handcuff me and cart me off to jail?”

“You’re not ever going to see the inside of a jail,” Barkley responded.

“So you’re my judge and jury?”

“I’m the closest you’re going to get.”

“You can’t shoot an unarmed man.”

“You’re unarmed?” Barkley smiled. “What’s that in your hand?”

The man glanced at the dagger he was holding. “You know the old line about bringing a knife to a gun fight. You would shoot me before I got within six feet of you.”

“That’s a better deal than the one you offered your victims, but you’re right. Let’s make this fair.” The marshal reached behind his back and pulled his backup pistol from the waist of his jeans. He stooped down, laid it on the floor, and then kicked it with his foot toward the man.

“Pick it up,” Barkley said.

“No, you’ll shoot as soon as my hand touches the weapon.”

“I’ll shoot you either way. At least this way you stand a chance of living.”

Sweat poured down the man’s face as he looked from Barkley to the gun laying on the floor in front of him.

“You can’t do this, damn it, you’re a United States Marshal.”

Barkley unclipped the badge from his belt and tossed it to the side. The clink of the metal on the tile floor reverberated throughout the room. He holstered his weapon.

“Feel better now?” he asked, his eyes never leaving the eyes of his opponent.

“I didn’t do anything to those women they didn’t deserve.”

“So, you’re telling me you’re innocent in all of this because the women you stalked, tortured, and murdered asked for it?” Barkley said. The man went silent and glared into Barkley’s eyes.

The time was upon him, and his darkest fear realized. Seth Barkley was stepping over that imaginary line that would make him like his old man. His life would never be the same after crossing over from good to evil.

Barkley pulled his weapon and slowly eased the trigger. “This is for Kaitlyn,” Barkley said. He was now a vigilante, no going back.

JSB: The main point I want to make is about this piece deals with “on the nose” dialogue. That’s an old Hollywood term which means dialogue that is direct and predictable. Predictability is what makes reading boring. So learning to write “from the side of the nose” will immediately increase interest and readability.

Another problem that often shows up in dialogue at the beginning of a novel is that it overstuffs exposition. The result is that the reader gets the impression it’s the author talking, feeding us information, and not the characters talking to each other. You need to ask these questions of all your dialogue:

The dialogue in this piece is back and forth, direct response, on-the-nose, and states things for the benefit of the reader. Remember my axiom: act first, explain later. And since dialogue is a compression and extension of action, that axiom applies here.

Here is a quick rewrite of the first few lines of dialogue:

“What do we do now?” asked the blond-haired man.

“You’re not going to see the inside of a jail,” Barkley said.

The man glanced at the dagger he was holding.

What’s left unsaid, what’s “between the lines,” is in the reader’s head now, and creating interest.

“What do we do now?” asked the blond-haired man.

“You’re not going to see the inside of a jail,” Barkley said.

“Do you pick your feet in Poughkeepsie?”

Some of you will recognize that last line of dialogue from the classic cop movie The French Connection. Based on the real-life NY cop Eddie “Popeye” Egan, this totally off-the-nose line was used by Egan (and by Gene Hackman as Popeye Doyle in the movie) to completely throw off a suspect being interrogated. The suspect would get so rattled by this oddball question from the “bad cop” that he’d give up something to the “good cop.”

It works here because we, the audience, are also going, “What? What’d he just say? Why? Why is he saying that?”

Which means you have their interest!

Now, of course I’m not saying our writer should use that exact line. I am merely pointing out that “side-of-the-nose” dialogue works wonders. By side-of-the-nose I mean something that is not a direct response, and indeed at first hearing sounds like it doesn’t make sense!

Write, try it. Make up your own oddball line of dialogue. Even be random about it, and justify the line later!

Writing from the side of the nose is also helpful for avoiding exposition-heavy dialogue, like this: “You can’t do this, damn it, you’re a United States Marshal.”

They both know he’s a U.S. Marshal. You told the readers this in the first paragraph. Cut that line of dialogue and see how the action moves forward, faster.

Here’s another line you can cut:

“So, you’re telling me you’re innocent in all of this because the women you stalked, tortured, and murdered asked for it?” Barkley said. The man went silent and glared into Barkley’s eyes.

But, you protest, that explains this entire scene! To which I respond, act first, explain later. We don’t need to know why a U.S. Marshall is executing this guy at this moment in time. Leave a mystery!

Which brings us to the last two paragraphs, which are heavy with telling us what Barkley is becoming. As wth all exposition, ask: do we need to know that now? Here’s a shock: Almost always the answer will be no.

What if the scene ended this way:

“I didn’t do anything to those women they didn’t deserve.”

Barkley pulled his weapon. “This is for Kaitlyn,” he said.

What? End it there? Why not? The reader will be compelled to turn the page. And when he or she does, make them wait to find out what just happened. You could shift to another POV, or you could show us Barkley doing something, and through his actions we start to see what he’s becoming …

Bottom line: Check your dialogue and narrative for on-the-nose writing. Cut it. Surprise us with dialogue and details that are odd, surprising, mysterious, unpredictable.

The first couple of lines give the impression we are in the “he” POV. But the scene ends in Barkley’s POV. Be strongly in Barkley’s head from the outset.

Barkley responded is redundant. Use said.

Okay, TKZers, your turn. I’m traveling today and probably won’t be able to comment. So take it away and help our brave writer.

15 thoughts on “Write From the Side of the Nose”