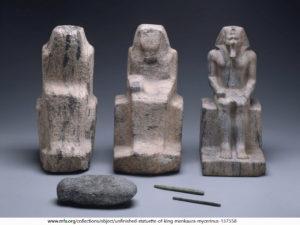 Two weeks ago, I posted a critique from one of our TKZ First Page writers. I liked the submission but I thought the writer erred on the side of being a little too spare in her writing. I called it “skeletal,” in fact. Click here to go back and review it.

It got me thinking, though, about sculpture. Back in college, I was briefly an art major, and while I was pretty decent in drawing and painting, I floundered in anything involving three dimensions. My final project in sculpture class was titled “Nude With a Dixie Cup Head.” I called it that because after carving away at my lump for weeks it still looked like hell, so during one long desperate night in the dorm bathroom, I filled a Dixie Cup with plaster, jammed it onto the torso, and called it a night. I got a D in the class.

But that class did teach me something that later helped me when I became a writer: You have to know what to leave in and what to carve away.

Usually, we think of novel writing as a pretty linear endeavor.  We don’t chisel away at marble or plaster until something emerges from the crude material. We start with nothing (the blank page) and add and pad until our vision is realized.

Writing a novel is a long series of questions and answers that you constantly ask yourself as you move through your story. As you do so, maybe it’s helpful to think about writing in terms of three-dimensional design. Consider…

Setting: Did I establish where my story takes place concretely enough so the reader feels transported to coastal Maine or does the setting feel like some generic Anywhereville? Am I wasting too many words describing this old insane asylum or do I need more to enhance the mood, to achieve what Poe called “the Unity of Effect”? If a setting is, indeed, like a character, is mine a quick line sketch or is it a well-rendered life-drawing? Or worse, is it not a character at all but just a sloppy caricature of Paris, Las Vegas, Miami…fill in the place with whatever postcard image you can come up with.

Backstory: How much do I reveal about Joe’s tortured past and do I deal with it in one long flashback scene or do I dribble it in slowly?  Am I boring my reader with all this family-tree data or do they need it to understand the dynamics between mother and daughter? And if you write a series — how much about a character’s past from previous books do you need to add?  Too much and you bore loyal fans; too little and you confuse new converts.  If you go back and read the submission I mentioned above, you’ll see that I asked the writer, even in her first 400 words, to include a few more tidbits about her characters to add intrigue.

Description: Do I tell the reader what my protag looks like or do I let it fall to their imagination? Have I successfully conjured up this police station so the reader feels the atmosphere or does it add nothing to the narrative? Have I exploited my description?  This is a subtle tool of fiction but important:  Do you make your descriptions mean something? Do they somehow enhance and reflect what is going on in your action?

Years ago, at Thrillerfest, I heard David Morrell talk about this brilliantly. He talked about how the novelist John Barth used a method call “triangulation.” (James Hall teaches this as well). When describing your setting, you take the sense of sight for granted, but then you add two other senses from among the remaining four. If your characters merely “see” everything, your writing will feel one-dimensional. So you “triangulate” and emphasize the other senses.

Tattoo this line from Morrell on your forehead: “The flaw of an amateur is to assume what’s in our head is what’s on the page.”

Think of Hemingway, a master of spare writing, yet you always got a sense of where his characters were, be it Havana, Africa or Key West. “The Snows of Kilimanjaro” opens with five paragraphs of dialogue but then we get this:

The cot the man lay on was in the wide shade of a mimosa tree and as he looked out past the shade onto the glare of the plain there were three of the big birds squatted obscenely, while in the sky a dozen more sailed, making quick-moving shadows as they passed.

So lean…yet Hemingway knew what to carve away and what to leave in. Not too much. Not too little. Such a delicate balance.

What to leave in and what to carve away is foremost in my brain lately because I am nearing completion of my first draft and rewrites loom. What I know awaits me…

I have to add some stuff:  I need to go back and beef up the backstory of a key character or his motivation in chapter 33 will make no sense. I have to add a little more color and work harder to make my setting come alive for the reader in Peoria who has never been to Michigan’s Upper Peninsula.

I need to subtract some stuff: The book is too long in sheer page count. And without even opening the early chapters, I can smell some cheese that needs cutting. I have to cut some passages that are larded with research, even though I worked really really hard to educate myself on copper mining, Catholic ritual and obscure whiskeys.  I need ferret out my writer tics, do a delete on extraneous attributions, and kill such darlings as “the road rose before him in a vampiric mist.”

Now, what does that mean, really? That you’re supposed to cut away all your best, most writerly stuff? I dunno. If you struggle with rewrites as I do, if you don’t know whether to approach it with a sledgehammer or a scalpel, I recommend you start by reading Chuck Wendig’s essay “25 Steps to Edit the Unmerciful Suck Out of Your Story.

A darling is often ill-defined as those things in your story that you love, but that’s daft. Don’t kill those things. Might as well say, “Murder your wife, burn your house down, YOU DO NOT DESERVE SUCH THINGS.” No, a darling is something that you love but that cannot justify itself in the text. You write a chapter in the middle of the book that has no bearing on the rest of the book and it drags down the pacing but you love-love-love it, well, that chapter might need two bullets in the chest, one in the head. Behead those precious, preening peacocks. I tend to do this at the very end, often because that’s when I actually have enough context and instinct regarding the draft that I can see those divots and nodules at a healthy distance. That said, it’s something to be aware of throughout the entire writing and editing experience.

I highlighted that part in red, because I think it gets to the nub of what I am trying to articulate here. (And forgive me if this feels obtuse but I can’t quite get this nailed down).

I can leave you only with one last quote, this one from Elie Wiesel: “Writing is not like painting where you add. It is not what you put on the canvas that the reader sees. Writing is more like a sculpture where you remove, you eliminate in order to make the work visible. Even those pages you remove somehow remain.”

10 thoughts on “Your Story As Sculpture:
What to Leave In? What to Carve Out?”