You’ve been waiting for it all year with bated breath. Your pulse rises every time you think about it. Some of you, oh faithful TKZ regulars, have even been emailing me begging to know when I was going to post my one annual post you can’t live without. 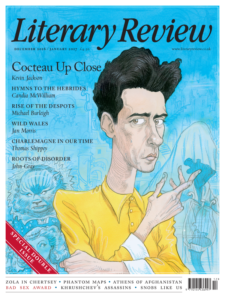 Yes, friends, just in time for Christmas, wrapped up here in a big blue-language bow, is THE LITERARY REVIEW’S BAD SEX IN FICTION AWARDS!

This is the 24th year the Literary Review has honored an author who has written the most “outstandingly bad scene of sexual description in an otherwise good novel.” Past winners have included Norman Mailer, David Guterson, and Thomas Wolfe and the nominees pretty much include every big literary name you’ve heard of. I like presenting this every December because, if nothing else, it makes us mere mortal writers understand that when it comes to sex, we’re all human — or, in one case this year, maybe bovine. The award was announced at a lavish ceremony Nov. 30 at the In & Out Club in London. No, I did not make up the name of that club. It is a distinguished private gathering place for members of the British armed forces.

But let’s get on with it, what say?

Here are the finalists first, so we can work ourselves up into a good lather waiting for the winner. And don’t write blaming me for any of this. I’m just the messenger here. I stopped trying to write sex scenes decades ago. 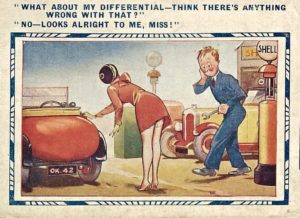 But  a loose ball bearing was his downfall…

A Doubter’s Almanac by Ethan Canin
As she talked Andret would make gentle, two-fingered tugs all the way around the hem of her dress to expose the lacy parts of her undersuit, like a child pulling candles from the rim of a birthday cake. Then he would begin kissing the frills. This she found beguiling. During sex she would quiet, moving suddenly on top of him like a lion over its prey. Her eyes stayed wide, Andret liked to keep his own closed; but whenever he opened them, there she would be, staring down at him, her black pupils gyroscopically inert. Again: leonine. He couldn’t help thinking that her gaze, even as she bent over him and strained her shoulders like a collared beast, was in fact an indictment.

The act itself was fervent. Like a brisk tennis game or a summer track meet, something performed in daylight between competitors. The cheap mattress bounced. She liked to do it more than once, and he was usually able to comply. Bourbon was his gasoline. 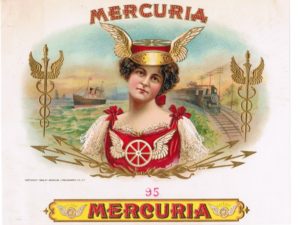 Is that a cigar rack in your back or are you just glad to see me?

The Tobacconist by Robert Seethaler

She looked him in the eyes, and, very slowly, brought her face up close to his, and when he felt her breath on his mouth and saw the delicate trembling of her puckered top lip, a shudder of joy passed through him with such force that he would almost certainly have fallen backwards into the cigar rack if Anezka hadn’t caught him at the last moment and pressed him firmly against her body. He closed his eyes and heard himself make a gurgling sound. And as his trousers slipped down his legs all the burdens of his life to date seemed to fall away from him; he tipped back his head and faced up into the darkness beneath the ceiling, and for one blessed moment he felt as if he could understand the things of this world in all their immeasurable beauty. How strange they are, he thought, life and all of these things. Then he felt Anezka slide down before him to the floor, felt her hands grab his naked buttocks and draw him to her. ‘Come, sonny boy!’ he heard her whisper, and with a smile he let go. 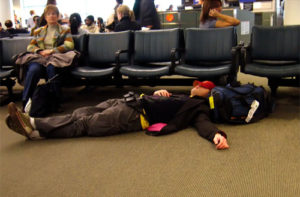 I could have lasted longer if we hadn’t used TSA Pre-Check.

Men Like Air by Tom Connolly
The walkway to the terminal was all carpet, no oxygen. Dilly bundled Finn into the first restroom on offer, locked the cubicle door and pulled at his leather belt. ‘You’re beautiful,’ she told him, going down on to her haunches and unzipping him. He watched her passport rise gradually out of the back pocket of her jeans in time with the rhythmic bobbing of her buttocks as she sucked him. He arched over her back and took hold of the passport before it landed on the pimpled floor. Despite the immediate circumstances, human nature obliged him to take a look at her passport photo. 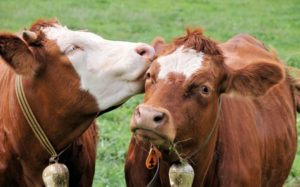 The Butcher’s Hook by Janet Ellis
I slide my hands down his back, all along his spine, rutted with bone like mud ridges in a dry field, to the audacious swell below. His finger is inside me, his thumb circling, and I spill like grain from a bucket. He is panting, still running his race. I laugh at the incongruous size of him, sticking to his stomach and escaping from the springing hair below. All the while, we stifle our noise and whisper like a church congregation during the sermon. He pinches my lips when I yelp, I shove my fingers in his mouth when he opens it to howl.

‘Anne,’ he says, stopping and looking down at me. I am pinned like wet washing with his peg. ‘Till now, I thought the sweetest sound I could ever hear was cows chewing grass. But this is better.’ He sways and we listen to the soft suck at the exact place we meet. Then I move and put all thoughts of livestock out of his head. 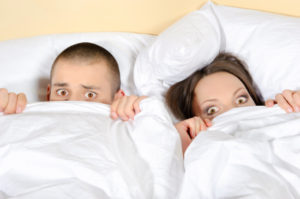 Like a virgin, knock-knocking for the very first time

Leave Me by Gayle Forman
Once they were in that room, Jason had slammed the door and devoured her with his mouth, his hands, which were everywhere. As if he were ravenous.

And she remembered standing in front of him, her dress a puddle on the floor, and how she’d started to shake, her knees knocking together, like she was a virgin, like this was the first time. Because had she allowed herself to hope, this was what she would’ve hoped for. And now here it was. And that was terrifying.

Jason had taken her hand and placed it over his bare chest, to his heart, which was pounding wildly, in tandem with hers. She’d thought he was just excited, turned on. It had not occurred to her that he might be terrified, too.

And finally, here is our winner, the Italian author Erri De Luca, who has been called by critics “the writer of the decade.” Proving, as the judges said, that even in the wake of Brexit, bad sex knows no borders. 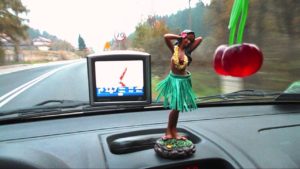 Paradise by the dashboard light

The Day Before Happiness by Erri De Luca
She looked at me, her eyes wide open, and brought her bloody lips to mine, pushed her mouth inside mine until I could feel it in my throat. My prick was a plank stuck to her stomach. She eased the pressure of the kiss, broke off. With a swerve of her hips, she turned me over and I was on top of her. She unwound her arms from my shoulders and guided my hands to her breasts. Opened her legs, pulled up her dress and, holding my hips over her, pushed my prick against her opening. I was her plaything, which she moved around. Our sexes were ready, poised in expectation, barely touching each other: ballet dancers hovering en pointe.

We stayed like that. Anna looked down at them. She pushed on my hips, an order that thrust me in. I entered her. Not only my prick, but the whole of me entered her, into her guts, into her darkness, eyes wide open, seeing nothing. My whole body had gone inside her. I went in with her thrusts and stayed still. While I got used to the quiet and the pulsing of my blood in my ears and nose, she pushed me out a little, then in again. She did it again and again, holding me with force and moving me to the rhythm of the surf. She wiggled her breasts beneath my hands and intensified the pushing. I went in up to my groin and came out almost entirely. My body was her gearstick.

Happy holidays, TKZers! Good health and good writing to you in the coming new year. Peace out.

24 thoughts on “You Know You Want It…
It’s the Bad Sex in Fiction Awards!”