The day you think you know what you’re doing is the day you’ve lost your edge as a writer. @davidbaldacci #WDC16 pic.twitter.com/R2pCAVG3vs

I agree. The dread mistake is called “mailing it in.” It’s when you think you’ve reached a certain point in your writing where you don’t have to improve. You’ve had some success, so why sweat and strain?

That’s not how a real writer thinks. How do I define a real writer? It’s someone who honors the craft and never settles. The real writer always sets the bar a bit higher than the last jump.

Mailing it in sometimes afflicts even the A list. A series that catches on in a big way can afford the author the opportunity to spend more time on a yacht than behind a keyboard. I’ve seen that happen a couple of times, and it’s not pretty.

On the other hand, you have a writer like Dennis Lehane. There he was with a popular PI series that he could have sat on. But then he proceeds to write one of the great stand-alone crime novels of our time, Mystic River. Not content with that, a few years later he writes an epic historical called The Given Day. I’m not sure he meant this to be a series, but I suspect the popularity of the novel gave rise to the idea. Now that series character, Joe Coughlin, is going to get the Ben Affleck treatment in a major motion picture.

I like what the Amazon “best books of the month” reviewer said about the second Coughlin book, Lived by Night: “Incredibly, Lehane … becomes more masterful with each book…”

That’s the kind of accolade for which a real writer strives. Because, you see, there is a joy and a satisfaction in the striving itself. The mail-it-inners don’t have that anymore. It’s a loss to the soul. 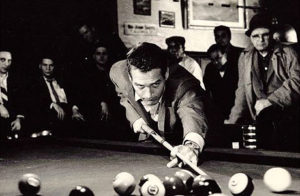 I’ve referred several times to that speech Paul Newman makes in The Hustler, one of my top ten favorite movies. He is “Fast Eddie” Felson, low-level pool hustler whose been told he’s a “born loser” by the satanic gambler played by George C. Scott. One day he describes to his girl, Sarah, what the game of pool feels like when “he’s really going.” It’s…

…like a jockey must feel. He’s sittin’ on his horse, he’s got all that speed and that power underneath him… he’s comin’ into the stretch, the pressure’s on ‘im, and he knows… just feels … when to let it go and how much. Cause he’s got everything workin’ for ‘im, timing, touch… it’s a great feeling, boy, it’s a real great feeling when you’re right and you know you’re right. It’s like all of a sudden I got oil in my arm. The pool cue’s part of me. You know, it’s a pool cue, it’s got nerves in it. It’s a piece of wood, it’s got nerves in it. You feel the roll of those balls, you don’t have to look, you just know. You make shots nobody’s ever made before. I can play that game the way nobody’s ever played it before.

Sarah looks at him and says, “You’re not a loser, Eddie. You’re a winner.”

Eddie looks at her quizzically. And she says, “Some men never get to feel that way about anything.”

Get it? Don’t ever settle for mailing it in.

Now how do you get to that “Fast Eddie feeling”? These things work for me:

Early in his career Dean Koontz was rolling along writing bestselling paperback thrillers under several pen names. But he wasn’t satisfied. So he set out to deepen his characterizations. He studied up on psychology and used what he learned to write Whispers. Would his wide audience for fast-paced thrills like it? It was a risk … and it became Koontz’s first New York Times bestseller.

So keep the edge. Make the writing itself (not just the results) the object of your affection. That way you’ll leave behind no regrets when your personal mail is delivered by the groundhog. 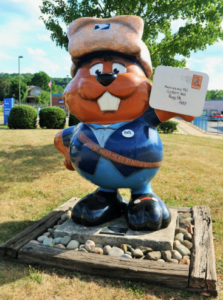