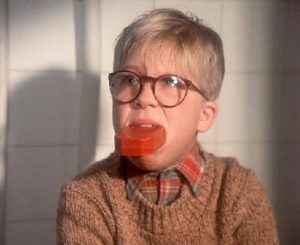 “Good authors, too, who once knew better words / Now only use four-letter words writing prose / Anything goes!” – Cole Porter, 1934

A convenient convergence of events led me to my topic today. And thank you, Calliope, because I had nothing to say until last Friday when I started the latest book by one of my favorite crime writers, and then Saturday, when I got a fan email from a lady in Vassalboro, Maine. And both got me to thinking about dirty words.

I’ll start with the fan email, because that’s easier. Here’s what she wrote to us:

Ladies,
I have been reading your Louis Kincaid books for many years and always look forward to the next one. But about your latest book She’s Not There I have to tell that despite the fact I liked the story, I did not like the fact you felt you had to use so much profanity. You don’t need this to tell your story. I plan to buy your next book but I think this is something you should reconsider.

I’ll get back to us in a second. Now, about that book I just started reading: I was really excited about this because I adore this author and the book had a juicy premise, great setting and interesting flawed hero. But I am now 63 pages in and there is this bad ringing in my ears.

I’m being F-bombed so much I can no longer hear the story.

This makes me sad because I so want this writer to succeed. But I think this writer has made a critical error: In an effort to shrug off a reputation as a solid series practitioner, the writer over-swung for the hard-boiled fence and wiffed. What should be a compelling story of a criminal redeemed is reading like a try-out for “The Wire.”

Okay, back to us. Here’s a personal caveat: All the books my sister and I have written contain profanity. In our hard-boiled PI-police procedural series, we think it’s near impossible to construct a believable world without the language of the streets. But over the course of fourteen books, we have drastically cut down on the profanity.  Does this make us angels? Hardly, as the good lady from Maine (and others) have reminded us. But it has made me think really really hard every time I go to type a word in my chapter that here in this blog I would have to bleep out.

And if I am put off by too many F-bombs in a crime novel -– me, a person who has been known to curse like a pirate in real life –- maybe we need to consider what it might be doing to our readers.

Now, I don’t think this some weird church-lady thing. When I started to look into this, I was amazed at how many message boards are out there populated with readers looking for fiction without profanity – on such disparate sites as the crime blog The Rap Sheet to the Provo Utah City Library. On GoodReads, there’s a long thread called “Is It Clean?” where I sense a real longing for non-cozies without profanity, epitomized by this posting: “Does anyone know of an author that writes like Vince Flynn but without the language?”

These readers are not all fans of cozies or Christian fiction (though many are). Many, like the Vince Flynn fan, are looking for more realistic stories without gratuitous profanity. John Sandford’s fans evidently have complained to the point that his son, Roswell Camp, was compelled to statistically document (on his own website) a book-by-book decrease in the profanity in his father’s books.

There are different reasons why readers dislike profanity in their fiction. It can colored by religious conviction, personal morals or just plain old taste. Authors are guided by the same impulses. Mark Henshaw, a Mormon crime writer, wrote a blog “Why I Don’t Use Profanity,”  saying, “My short answer to the question is: because my mother reads my books. My long answer is a bit more involved.”

Writers of romances, cozies or “traditional” mysteries (sorry for the clumsy labels!), are sometimes under guidelines for market targeting. For the Mystery Writers of America’s Mary Higgins Clark Award, the definition is there in the submission guide lines: “The book most closely written in the Mary Higgins Clark Tradition (my italtics) according to guidelines set forth by Mary Higgins Clark.” It goes on to list several criteria, the last one being, “The story has no strong four-letter words or explicit sex scenes.”

The Agatha Awards, given out by Malice Domestic, specify that the awards “honor the “traditional mystery….that is to say, books best typified by the works of Agatha Christie as well as others. For our purposes, the genre is loosely defined as mysteries that contain no explicit sex, no excessive gore or gratuitous violence.” No mention of cussing there, but I have seen blogs taking the awards to tasks for honoring books that contain profanity.

And then there’s the whole Pandora’s box of YA and Juvenile fiction, something I know nothing about, except that I have heard that the genres are evolving fast.

In a 2012 analysis of best-selling teen novels, researchers from Brigham Young University reported that kids encounter about seven instances of profanity per hour — and those characters with the dirtiest mouths are often the richest, most popular and best-looking.

They analyzed profanity in 40 teen novels on the New York Times’ best-seller list of children’s books targeting children age 9 or older. Some books were especially gritty. The novel Tweak clocks in with 500 profanities, including 139 F-words. There were 50 F-bombs in Gossip Girl, and 27 in the novel Tempted. The novels with the foulest language were typically aimed at kids 14 and up. Said one researcher, “I had no clue there would be that type of content in those books. If they were made into movies, they would easily be rated R, and parents have no clue.”

What about the rest of us? Where is the line for us and when can we cross it? And what exactly is profanity? We can maybe toss in a “God, that hurts.”  And maybe a bitch or bastard or “damn, that’s good!” But beyond that, things get murky.

I tried to think of current harder-boiled writers I have read that don’t have profanity or use so little that I miss it.  My short list includes John Grisham, Dean Koontz (gory yes but blue no), and Sue Grafton.  This is what passes for cussing in a Grafton’s K Is For Killer:

I drank my beer, heart thumping. I heard her exclaim of surprise. “Look at this. Gaaaaaaad…” She dragged the profanity out into three musical notes as she scooped up her belongings.

I seem to remember Robert B. Parker’s books being pretty tame. Yet when Ace Atkins took the series over after Parker’s death, one critic, in an otherwise glowing review, suggested some readers might be put off by the saltier language:

Parker used obscenities in his books the way Spielberg used the color red in “Jaws”: when you saw it, it was blood and it was designed to elicit a visceral reaction. So, too, did Parker use curse words in his books. They were there, no doubt, he certainly wasn’t a prude. But they were only there when needed. Atkins meanwhile laces the four letter words in and out of the dialogue with a kind of reckless abandon.

Then there’s Lee Child. In an interview with Ali Karim at Shots e-zine, Child talked about why he never uses any profanity:

Although personally I always have used profanity in my speech, for some very subconscious reason, I just could not write it down on the page. I really couldn’t and I also then realized that it’s impossible to capture speech realistically unless you are prepared to fill up the page with four letter words – which is actually how highly stressed people speak. So I thought were into artifice here anyway, so let’s go the whole hog and make highly stressed, tough-guy speech with no four-letter words and see if it’s possible and I think it comes across as convincing. There are a certain number of people who are grateful that there are no four-letter words, and I have never heard from anybody who misses them and wishes I’d put them in.

Now, I could have sworn Jack Reacher swore. But I guess I am wrong. Lee Child might be dropping dirty bombs but no F-bombs. And Child is making an important point here, not just about profanity, but about how to write great dialogue. In crime fiction, foul language is justified on the ground that it is lifelike. But dialogue is NOT a mimicking of real speech; it is a sleight of hand (or ear) that gives the impression of humans talking within the shape of story.  As Child says, in real life highly stressed people WOULD cuss a blue streak. But on the written page, that quickly grows tiring and trite, and stinks of a writer trying too hard.

So, where do I come down on this? Somewhere in the middle. I still believe it is a necessary element for the style I have chosen but every time I feel the urge to let loose with a stream of blue, I do one of three things:

Show Don’t Tell. Rather than putting a cuss word in a character’s mouth, I try to find a way to convey the attitude through action. Yeah, it’s harder but often more effective.

Fudge It.  “Goddammit” is pretty strong stuff. A simple “damn” will do ya. Likewise, you can get around some words with substitutes, especially if the mood isn’t exactly boiling, like when a crusty old cop is joking around about a “f-ing dirtball.” JK Rowlings uses “effing” in Harry Potter books. And “friggin'” is a good stand-in for the f-bomb, although you should be aware that there is a a really filthy Sex Pistols song called “Friggin in the Riggin.”

Leave It Out. As Lee Child said, if you over-use profanity, it can dilute its power and it can make you, the writer, look inauthentic, and do you really want to be a poor man’s Pelecanos? One or two well-placed cuss words can be the spice you need at the prime moment you need it.  Remember Rhett Butler’s exit line in Gone With the Wind: “Frankly, my dear, I don’t give a damn.” Why do you think the American Film Institute ranks it No. 1 movie quotation of all time? Because it’s the only profane word in the movie and boy, what a punch it packed.

Sometimes, you just gotta friggin’ use it.

So, yes, I use profanity in my books and will continue to do so. No, I don’t use as much as I use to and it isn’t because I’m afraid of offending someone. Sorry, dear reader, in Vassalboro, Maine, but it’s true. I use profanity with care and caution, because words have power. And finding the right word at just the right moment is my job.

I’m going to let another writer have the last word on this because she says it best, in my opinion: Take it away, Kathryn Schultz, in your essay “Ode To a Four-Letter Word:”

Do we need…a justification, beyond the one a writer might mount for any word, i.e., that it works? There is, after all, no such thing as an intrinsically bad, boring, or lazy word. There is only how it is deployed, and one of the pleasures of profanity is how diversely you can deploy it. Writers don’t use expletives out of laziness or the puerile desire to shock or because we mislaid the thesaurus. We use them because, sometimes, the four-letter word is the better word—indeed, the best one.

53 thoughts on “Profanity in Crime Fiction:
Reality or Lazy Writing?”