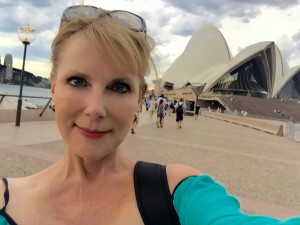 Pardon the lateness of today’s post–your trusty admin got flummoxed by one too many date line and time zone  changes. We were in Australia for the Tennis Open, then New Zealand. Not being a tennis enthusiast, I spent most of my time chatting away with members of our group. I met one lovely woman, a writer, who’d written a book following the death of her husband. She traveled across multiple continents and countries, collecting stories of hope from people whose spouses had died. I haven’t read the book yet, but I understand it includes many “signs” that the surviving spouses interpreted as communications from their loved ones. It sounds like a lovely story, like THE YEAR OF MAGICAL THINKING meets Eat, Pray, Love.

But what struck me most about her story was her description of the editing process. Without being prompted, I launched into a discussion of any number of ways one could set up a framework for a book dealing with death, travel, and personal/spiritual discovery. My new author friend waved her hand, as if to dismiss the whole topic of structure.

“I hired an editor, a very well known person,” she said, “but I wanted to write my book in my own way. Structure, organization–that kind of stuff, I felt,  interfered with the way I wanted to tell my story”

Me: “And was your book…published?”

“Eventually,” she replied. “I hired a (well-known predatory company that makes money off inexperienced writers, emphasis mine) that made it into an ebook and uploaded it to Amazon, to all the biggies.

“I just wanted to structure it my own way,” she concluded.

“And that’s fine,” I replied. “But if you actually want to, you know, sell books, you may want to consider revisiting your editor’s suggestions.”

This brings up something I’ll never understand: Why do people insist on “doing their own thing”, rejecting sound, time-tested, professional advice? It’s highly unlikely that a first-time writer’s notion of “doing her own thing” will result in a better book than if she had simply followed some tried-and-true craft guidelines.

Me? I’m like a sponge. I’m always looking for new ways to soak up valuable input from seasoned authors and professionals. That’s why, a few years ago,  I gathered a few hardy, fellow writers. Together, we started this blog. This blog is the place we can all come, let down our writer’s facade, and talk about the nuts and bolts of the writing craft.

“Do you own thing”? Good for diary writing. Not so good for selling books. What do you think?

Update: I just realized that instead of posting my stupid selfie at the top of this post, I should have linked to a video of the absolutely most adorable thing in New Zealand, the annual Running of the Wools. They run the sheep down the Main Street of Queenstown (or at least, try to make them run). It’s hilarious. Watch it if Ewe dare.

16 thoughts on “Sure, you can do your own thing, but not if you want to sell books”