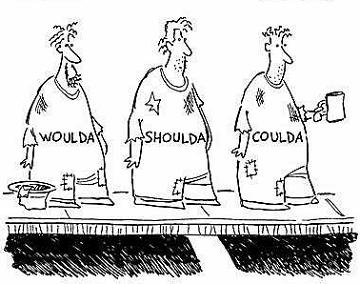 Eighty percent of success is showing up.” — Woody Allen

I got my first rejection letter back in 1980. It was for a romance novel I had written. The letter came from Dell Publishing. It was short and sweet.

We thank you for the opportunity to consider your proposal or manuscript.  We are sorry to inform you that the book does not seem a likely prospect for the Dell Book list.

Because we receive many individual submissions every day, it is impossible for us to offer individual comment.

We thank you for thinking of Dell and we wish you the best of success in placing your book with another publisher.

Yes, they had crossed out (scribbled out really) “sir” and had sloppily inked in my last name. But dontcha love the elegance of the phrasing? “The opportunity to consider”  (the story I had sweated over for a year.) “Doesn’t seem a likely prospect…” (to ever see the inside of a bookstore). “We thank you for thinking of Dell…”  (like Dell is some real live person who actually wrote this?) “We wish you success in placing your book with another publisher…” (And don’t darken our doorstep again, you no-talent little twerp.)

I found this letter the other day when I was cleaning out my office.  Oddly, it was the same day I bought a new wallet and had to transfer all my stuff to the new wallet.  Tucked behind my old Social Security card, I found a tiny folded up, deeply creased yellowed piece of paper. On it was typed this:

I’d rather be a could be
If I couldn’t be an are
for a could be is a maybe
with a chance of reaching par.
I’d rather be a has been
than a might of been, by far
for a might have been has never been
but a has was once an are.

I have no idea when I typed that or where it came from. I don’t even know how long I have had it, though I suspect I have worn out many wallets since. But I do know that I have it for as long as I have been using a wallet so that means most of my adult years. The sentiment in that little stanza has carried me through many a bad patch and through many jobs.

I remember I had it tacked up on the bulletin board above my desk in my dorm freshman year at Eastern Michigan University.  I was there at the state college by virtue of a 2.5 high school GPA, mediocre SATs and a promise from my dad that he had just enough money to get through one year. After that, he said, I was on my own.  I got a job flipping burgers at Big Boy’s and ended the year with a 3.5 GPA, which led to a modest scholarship. I made it through the next three years on waitress tips and student loans.

When I graduated in 1972 with a teaching degree, there wasn’t a job to be had. But I had been working on the college newspaper for extra money and the adviser suggested I might be able to get a job as a reporter. Twelve rejections later from the largest newspapers in the Detroit metro area, I got hired as the editor of the Suburban Woman section of the Southfield Eccentric weekly. I was off and running…at $125 a week.

for a could be is a maybe
with a chance of reaching par.

I won a national award from the University of Missouri school of journalism for my women’s section and got a call from a guy at the Fort Lauderdale News who was looking for someone to run his women’s section. (Yes, that’s what it was still called in those days, young-uns).  I got the job, packed up my cat in my rusty VW, and moved to Florida.  I was 24 years old and not ready to run a daily feature section, let alone supervise a staff of nine, three of whom were in their 60s. Six months later, I was demoted to assistant and an older woman was brought in as my replacement.  I wanted to quit. But I went for a walk in the parking lot, cried, and went back upstairs to work.  Six years later, I was promoted to assistant managing editor.

I’d rather be a has been
than a might of been, by far.

It was a nice paycheck but I was writing performance evaluations instead of articles. They wouldn’t let me go back to being a writer because my salary was too high and I was the only female in management. So I bought a small typewriter and at night in the dining room, I wrote a romance novel called The Dancer. I sent it out to agents and maybe 30 of them even bothered to write back and tell me no. So I sent it out to editors directly. (You could do that in those days…see rejection letter above).  Rejections…too many to remember.  Many rewrites and re-submissions later, I got a letter from a woman at Ballantine Books. Someone had given her my manuscript. My story was about a ballerina who had to give up her career after an injury. The woman who bought my first book was an ex-dancer.  I was off and running…with an advance of $2,500.

I had four books published with Ballantine/Fawcett. I found a good agent. Life was good. Then, one day, the agent told me the publisher was dropping me.  No reason given. I wasn’t smart enough about the industry in those days to understand the numbers game, the Barnes and Noble Death Spiral, and the fact that no, your book doesn’t get placed in the front of the store just because it’s good.

I gave up.  I was devastated and depressed. I walked around the mall alot. My fabulous husband, who had told me I could quit my day job to write fulltime and that we’d work it out financially, finally told me I had to try again — or get a job.  So I started over, writing a really bad but heart-felt historical family saga.  An agent told me she liked the suspense in my writing and that I should switch to mysteries.  I wrote 200 pages about a Miami homicide cop whose husband and kids are killed in a drug-raid-gone-bad.  I showed it to the agent. She suggested it was a good idea, in a mystery, if someone gets killed in the first 200 pages. She told me to go home and read some P.D. James and start over.

for a might have been has never been
but a has was once an are.

I called my sister Kelly, who I knew was working in her spare time on her own book and said, “I have a proposition for you.”  Six months later, we finished the first Louis Kincaid book. It was rejected by 10 New York publishers before it found a home at Kensington Books, a fine family-owned house in Manhattan.  It didn’t sell that well but it got some nice reviews and one really scathing one from Kirkus. But Kensington asked for two more.

The second Louis book, Dead of Winter, was nominated for an Edgar. We were off and…still trotting. Kelly and I are now working on Louis book No. 13.

You’ve probably heard different versions of my story a million times and the stories of others who have struggled. But let’s remind ourselves that…

J.K. Rowling was just-divorced, on government aid, and could barely afford to feed her baby in 1994, just three years before Harry Potter and The Philosopher’s Stone, was published. When she was shopping it out, she was so poor she couldn’t afford a computer or even the cost of photocopying the 90,000-word novel, so she manually typed out each version to send to publishers. It was rejected dozens of times until finally Bloomsbury, a small London publisher, gave it a second chance after the CEO’s eight year-old daughter fell in love with it.

Stephen King was broke and living in a trailer with his wife—also a writer—and they both worked multiple jobs to support their family while pursuing their craft. They were so poor they had to borrow clothes for their wedding and got rid of the telephone because it was too expensive. King received so many rejection letters that he developed a system for collecting them. From On Writing: “By the time I was 14…the nail in my wall would no longer support the weight of the rejection slips impaled upon it. I replaced the nail with a spike and kept on writing.” He received 60 rejections before selling his first short story, “The Glass Floor,” for $35.  After dozens of rejections, he finally sold Carrie for a meager advance to Doubleday Publishing, where the hardback sold only 13,000 copies—not great. Soon after, Signet Books signed on for the paperback rights for $400,000, $200,000 of which went to King.

Fifteen publishers rejected a manuscript by e. e. cummings. When he finally got it published by his mother, the dedication, printed in uppercase letters, read WITH NO THANKS TO . . . followed by the list of publishers who had rejected his prized offering.

Fred Smith, the founder of Federal Express, received a “C” on his college paper detailing his idea for a reliable overnight delivery service. His professor at Yale told him, “Well, Fred, the concept is interesting and well formed, but in order to earn better than a C grade, your ideas also have to be feasible.”

James Lee Burke’s novel The Lost Get-Back Boogie was rejected 111 times over a period of nine years and, upon its publication by Louisiana State University Press in 1986, was nominated for a Pulitzer Prize.

Michael Jordan famously said:  “I’ve missed more than 9000 shots in my career. I’ve lost almost 300 games. Twenty-six times I’ve been trusted to take the game winning shot … and missed. I’ve failed over and over and over again in my life. That is why I succeed.”

But maybe my favorite failure is Winston Churchhill. He had to repeat a grade during elementary school and, when he entered Harrow, was placed in the lowest division of the lowest class. Later, he twice failed the entrance exam to the Royal Military Academy at Sandhurst. He was defeated in his first effort to serve in Parliament. He became Prime Minister at the age of 62. He later wrote, “Never give in, never give in, never, never, never, never — in nothing, great or small, large or petty — never give in except to convictions of honor and good sense. Never, Never, Never, Never give up.” (his capitals, not mine.)

So, to all my fellow writers on these days after Thanksgiving, here’s my message. If you’re hitting that wall, if that wall is papered wall with rejections, if you’re filling your hard drive with tenth drafts — stop for a moment and give thanks for the power of failure.  It is what makes you strong, it what makes you better. It is what keeps you in the game.

Don’t give up. Tattoo this on your brain:

I’d rather be a could be
If I couldn’t be an are
for a could be is a maybe
with a chance of reaching par.
I’d rather be a has been
than a might of been, by far
for a might have been has never been
but a has was once an are.

24 thoughts on “Why You Should Never Give Up”