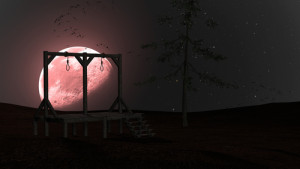 Today we’ll be critiquing the first page of a story called THE GHOST AT BEAVERHEAD ROCK. I’ll add my comments at the end. Please add your notes and suggestions in the Comments.

THE GHOST AT BEAVERHEAD ROCK

Darkness still hid the night’s work when Daniel Stark and Timothy McDowell stepped out of the restaurant. It would not be hidden for long, Dan said to himself. A faint glow separated the outline of the easterly mountain ranges from the star-filled sky. The boy must not see it. They must be gone before anyone saw it.

The coach from Bannack to Virginia City stood in front of the Overland stage office. Restless, wanting to move and get warm, the horses stamped their feet, rocked the coach forward, then back. Their breath steamed in the lamplight spilling from the windows.

“It’s ready to leave. Hurry.” Dan slung his rifle across his back.

“Sun ain’t up yet.” Timothy yawned. “Sure is a nice morning. Crisp.”

The boy’s deep voice still could startle Dan, who thought of him as the boy he had left in the spring. “Let’s get our bags.” He set a fast pace toward the rooming house.

Boy-like, Timothy scuffed his toe at clods of frozen horse manure. “We’ll be in that dratted box all day. I want to enjoy the air.”

“You can enjoy the air in Virginia City.”

“Not if the smoke settles there. Gets so bad sometimes you can hardly breathe.” He took a deep breath, let it out. ”Nothing like mountain air.”

Dan looked over his shoulder. Timothy grinned at him, teasing, but took longer steps. Dan cuffed the boy’s shoulder, not much below his own. “That’s better.”

As he spoke, the stars lost brilliance, and the mountains around Bannack stood out from the sky.

The stage driver came out of the office, holding a coiled blacksnake whip in one hand. He arched his back, circled his arms, rolled his shoulders. Two passengers, a man and a stout woman walked out of the stage office.

“What in hell—?” Breaking into a run, Timothy veered off the boardwalk, broke into a run uphill.

Damn! He had seen it. Pivoting, Dan sprinted after him. He leaped the sluice ditch, dashed between the one-man cabins on Bachelor’s Row. His boots crushed frozen bunch grass. His breath rasped in his throat. The rifle bounced against his back.

He caught Timothy amid the sagebrush several yards from the gallows and tackled him around the waist. They tumbled together onto the ground. “No, Tim, don’t look – ” What he meant to say was lost as the corpse turned on its rope; its frozen eyeballs stared into his soul.

My comments: I think this first page shows that the writer has a nice ear for dialogue. The conversation between the man and boy flowed easily. There are some other craft-related issues that need to addressed, in order to make this scene stronger.

Get important information across early

I sense that this writer has a strong vision of the story’s characters and setting, but the first paragraph needs to provide more information to convey that vision to the reader. In the absence of clues, readers start making their own assumptions. It’s easy for them to wander off track. For example, I didn’t realize until the second paragraph that the story is set in the western past. By then, I had already formed a vision of a much more modern setting. It’s jarring to the reader to have to backtrack after making a wrong assumption.

Don’t over-withhold information in an effort to build suspense

The first paragraph in this story makes a reference to “the night’s work,” followed up by several more deliberately vague references to “it”. We don’t learn what “it” is until the very end of the page, however. Too much information is withheld for too long, potentially frustrating the reader or causing him to lose interest. The first paragraph might be stronger if it contained a hint or reference to the gallows. For example, instead of repeating the use of a vague pronoun in the following sentence:

“It would not be hidden for long…”

It might be more dramatic if Dan spotted the silhouette of the dark, swinging mass (the corpse) emerging against the night sky. Just a hint, enough to give the reader some sense of the terrible sight that he’s trying to keep the boy from seeing.

By the time I encountered the following paragraph:

“What in hell—?” Breaking into a run, Timothy veered off the boardwalk, broke into a run uphill.

I still didn’t know what it was that Timothy had seen and was reacting to. By the time I got to the payoff at the very end of the scene–the sight of the gallows and hanging corpse–I was feeling confused and somewhat frustrated as a reader. This confusion can be avoided by providing the reader with enough information earlier in the scene, to keep him oriented and engaged in the story.

Please add your notes and suggestions in the Comments. And thanks to our brave writer for submitting this first page!

17 thoughts on “First-Page Critique: The Art of Stage Setting”