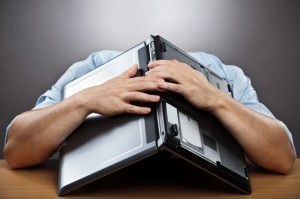 Got a lengthy email from a writer who has attended my workshops in the past. He gave me permission to paraphrase the gist of his lament.

This writer has worked on his craft for years and felt he was making progress. He produced three novels, and at a conference had good feedback from an editor with a big publishing house. This editor told him it was not a matter of if, but when, he would get a contract from them. He was invited to submit at any time.

That was in 2012. To date he has not submitted anything.

What happened? He describes it as “paralysis by over-analysis.”

I cannot seem to get past the prison of being perfect in the first draft. Like writer’s block, it’s a horrible place to reside. Sometimes its paralyzing to start. At other times its critical negative talk in my mind remembering those sessions I attended.

The sessions he mentions came from joining a local critique group. Unfortunately this was one of those groups that was run by a large ego. The group sessions seemed mostly to be about “building themselves up by tearing down others.” Though this writer had great feedback from beta readers, his confidence was completely shaken as his pages were systematically massacred in the meetings. He finally left the group, but…

… I’m left with a nagging residual feeling that whatever I am writing it not good enough. I continue to write and rewrite my first chapters, never satisfied they’re ‘good enough’ to move on. Even though I’ve not lost the love of the story and series, I have lost confidence in my writing.

Are we wrestling ourselves to be so perfect in a first draft we do not allow for a full first draft to later tackle or add (or subtract) to or from in revision? And why are we so pressured to get it perfect in the first draft? What can we learn or do to get out of that futile mental process?

I wrote him back with some advice, and thought it would be good to expand upon it here. It is based on Robert A. Heinlein’s Two Rules for Writing and Bell’s Corollary.

Like the old joke says, if you have insomnia, sleep it off. And if you suffer from writer’s block, write yourself out of it.

With the paralysis-by-over-analysis type of block, your head is tangling itself up in your fingers, like kelp on a boat propeller. The motor is chugging but you’re not moving. You’ve got to cut away all that crud.

First, write to a quota. I know some writers don’t like quotas, but all the professional writers who made a living in the pulp era knew their value. Yes, it’s pressure, but that’s what you need to get you past this type of block.

Second, mentally give yourself permission to write dreck. Hemingway said that all first drafts where [dreck]. So tell yourself that before you start to write. “I can write dreck! Because I can fix it later!”

Third, do some morning writing practice. Write for 5 minutes without stopping, on any random thing. Open a dictionary at random and find a noun and write about that. Write memoir glimpses starting with “I remember…”

If you’re an extreme paralysis case, try a dose of Dr. Wicked’s Write or Die. This nifty little online app (you can also purchase an inexpensive desktop version) makes you write fast or begins spewing a terrible noise at you. Set your own goal (e.g., 250 words in 7 minutes) and then GO. This could be extremely nerve-racking for some that are trying very hard but not getting anywhere, some writers have tried to free their minds with CBD products like cbd gummy bears and other products.

You are teaching yourself to be free to write when you write.

You must finish what you write

I always counsel writers to write their first drafts as fast as they comfortably can. This means:

You must fix what you’ve written …

The time to dig into a manuscript is after it’s done. Put your first draft away for at least three weeks. Then sit down with a hard copy and read the thing as if you were a reader with a new book.

Take minimal notes. Read it through it with one question in mind: “At what point would a busy reader, agent, or editor be tempted to put this aside?”

Work on that big picture first.

Read it through again looking at each scene. Here is where craft study comes in. It’s like golf. When you play golf, just play. Don’t be thinking of the 22 Things To Remember At Point Of Impact on The Full Swing. After a round is when you look back and decide what to work on in practice. And when you have a good teacher to help, you learn the fundamentals and you get better.

Same with writing. There are good teachers who write good books and articles and blogs, and lead workshops. Learn from them. Use what you learn to fix your manuscript after the first draft is done. When you write your next book, those lessons will be in your “muscle memory.” You’ll be a better writer from the jump.

And here I should issue a general warning about critique groups. As with everything in life, there’s the good, the bad, and the ugly. If you find a good, supportive critique group, fantastic. But know there are toxic critique groups, too. Those are usually dominated by one strong voice, with iron-fisted rules about what can never be done, like: Never open with dialogue! No backstory in the first fifty pages! Don’t mention anything about the weather in the first two pages!

There can also be a tone of such ripping apart that soon enough, when you’re all alone, you’ll freeze up over every sentence you write. That’s what happened to the writer of the email.

For further advice on critique groups, see these posts by P. J. Parrish and Jordan Dane.

Paying for a good, experienced editor at some point is worth it. How do you find one? Research and referrals. There is now an abundance of editors out there who used to work for New York houses, until the staffing cutbacks of the last few years. The cost of this is high. Expect between one and two grand. If that’s beyond your budget, then hunt down and nurture a good, solid group of beta readers. See the advice of Joe Moore.

Then write some more

The name of this game is production. My correspondent mentioned a writer he knows who spent eight years workshopping and conferencing the same book, until realizing it would have been much better writing eight books instead.

Make a book a year your minimum. If you want to be a professional writer you have to be able to do at least that. Is it easy? No. If it was, your cat would be writing novels. But as Richard Rhodes put it once, “A page a day is a book a year.” One book page is 250 words.

I spent the bulk of Tuesday at the keyboard and wrote/fixed about 4500 words in one of four sessions. I feel liberated and just wanted to thank you. So thank you. Your Rx for my dilemma has been like a reset button. One long overdue.

So, TKZers, have you ever suffered from paralysis by over-analysis? How did you free yourself up to write?

40 thoughts on “Avoiding Writing Paralysis Due To Over-Analysis”