Settings can provide inspiration for a scene, a story, or even a character in a book. For example, I’ve used old Florida estates as models in at least three of my novels. Body Wave, book 4 in my Bad Hair Day Mysteries, launched yesterday as a newly revised Author’s Edition. 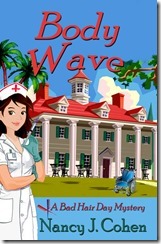 Marla, my hairstylist sleuth, goes undercover as a nurse’s aide to care for elderly matriarch Miriam Pearl. As Publisher’s Weekly states, she “agrees to help her snake of an ex‑husband, Stan Kaufman, who’s been arrested for the murder of his third wife, Kimberly, find the real killer.” Stan believes one of Kim’s relatives might be guilty. Most of them reside at the Pearl estate. Marla, feeling a sense of obligation to Stan, agrees to his scheme. She dons a nurse’s uniform and accepts a part-time job assisting the wealthy head of the family.

So what stately mansion did I use as the model where Marla goes to snoop? A drive along our coast will show you many stately homes, any number of which could have served as the model for the one in Body Wave. Bonnet House (http://bonnethouse.org/) was the model for cousin Cynthia’s seaside Florida estate in Hair Raiser (book #2 in the series). It’s a historic site with lush tropical grounds abutting Fort Lauderdale Beach. There’s the Flagler Museum (http://www.flaglermuseum.us/) in Palm Beach, which I’ve used in an—as yet—unpublished mystery. 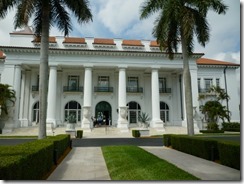 And then there are the haunted sites that coalesced into Sugar Crest Plantation Resort on Florida’s west coast for Dead Roots. I enjoyed researching the Breakers (http://www.thebreakers.com/), the Don Cesar Beach Resort (http://www.historichotels.org/hotels-resorts/loews-don-cesar-hotel/), haunted sites like the Kingsley Plantation (http://floridafringetourism.com/listings/ghosts-kingsley-plantation/), and other locales for their ghost stories and spooky ambience. A stay at the haunted Cassadaga Hotel (http://www.cassadagahotel.net/) set among a town of certified mediums lent authenticity to Died Blonde.

These are mainly historic estates and grand resorts. I’ve used Florida theme parks as the model in several of my stories, not to mention numerous towns that Marla visits to interview characters or to investigate an angle in a mystery. Florida has a wealth of diverse settings that inspire writers in many ways.

How about you? Have old houses played a part in your stories?

Check out my Contest Page for a chance to win free books: http://nancyjcohen.com/fun-stuff/contest/

6 thoughts on “Settings as Inspiration”