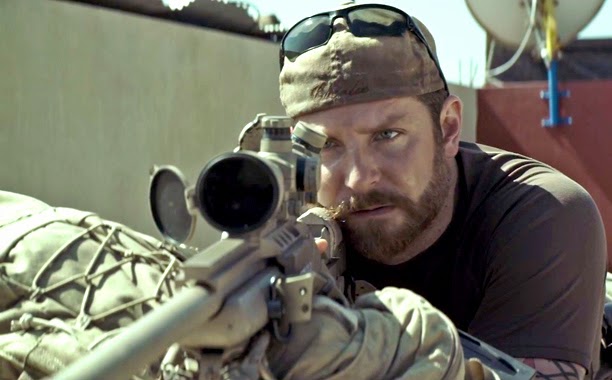 I’m still struggling to finish my novel, but my son wanted to see the movie American Sniper this week and I just couldn’t say no. I was curious about the film because it’s generated a lot of controversy. Some people say the movie is pro-war, some say it’s anti-war. I wanted to see for myself.
The movie is directed by Clint Eastwood, and I should state right off the bat that I have a lot of admiration for the guy. His Unforgiven is one of my favorite films, full of classic quotes. (“It’s a hell of a thing, killing a man. Take away all he’s got and all he’s ever gonna have.”) In fact, the King of Jordan apparently used a quote from Unforgiven a few days ago when he promised vengeance against the Islamic State for burning one of his Air Force pilots to death. Eastwood’s Million Dollar Babyis also amazing. And then of course there’s Dirty Harry, Rawhide and all those spaghetti westerns. Eastwood has built up a lot of good will with me, over half a century, so my opinion might be a little prejudiced in his favor.
That said, I can’t understand how anyone can think American Sniper is a pro-war movie. On the contrary, it does an excellent job of showing the horrors of war, specifically the urban combat in Iraq in 2004 and the following years. And it doesn’t shrink from portraying the terrible injuries, both physical and mental, that many veterans of the Iraq war are still battling. The hero — Chris Kyle, based on the real Iraq-war sniper who was murdered a couple of years ago by a fellow veteran — expresses a lot of patriotic sentiments and hews to the oft-repeated justifications for invading Iraq. (“You want these f***ers to come to San Diego or New York?”) But Eastwood makes it clear that this hero isn’t always thinking straight. After the funeral of a buddy who had started to question why they were in Iraq, Kyle angrily argues that the man’s loss of confidence caused his death. But we know this isn’t true, because just a few minutes earlier in the movie we saw this guy die, and it had nothing to do with his confidence or lack of it. He just stepped into the path of a bullet. It was the typical random carnage of war.
So here we have a good example of a classic thriller technique that’s very difficult to pull off: the unreliable narrator. The hero says something that you could certainly take at face value, but it’s also possible that he’s confused and traumatized. And maybe that’s why the movie is so controversial. It says different things to different people, depending on their preconceptions and politics. And I think that’s a good thing. The film is complex, or at least it tries to be.
In other respects, though, American Sniper is too Hollywood. Because the movie revolves around Kyle, he has to do everything — he’s a sniper, he’s a commander, he’s an interrogator. He’s an expert on hunting down Al Qaeda. At times it seems like he’s running the whole war. And at times Eastwood veers dangerously into spaghetti-western territory. The showdown between Kyle and the movie’s primary villain, an enemy sniper, plays like a High Noon shootout, except in this case the dueling snipers are more than a mile away from each other. (This face-off, by the way, never happened in real life. It’s strictly a Hollywood creation.) And the movie’s climax is like a Middle Eastern version of the Alamo, with a special-effects sandstorm thrown in for good measure.
Last but not least, I have to put in a good word for Bradley Cooper, the actor who plays Kyle. If I were to issue ratings like Entertainment Weekly, American Sniper would get a B+, but Cooper’s performance would get an A. That scene where he hyperventilates after nearly shooting the small Iraqi boy struggling to lift an RPG launcher? It was phenomenal.
Okay, back to the novel. This time I’m really going to finish it.
0

2 thoughts on “The Fog of War”