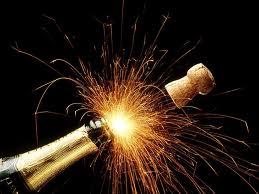 Well, here it is, friends. The last TKZ post of the year. For the next two weeks of blogging silence let’s make it all about hearth and home, friends and family, Christmas and Hanukkah, food and football––and getting ready to make 2015 the best year of your writing life.
1. Take a Vision Day
What kind of writer do you want to be? What kind of career do you want to have? Dream. Every accomplishment begins with a vision of what it will look like and feel like to you.
Every year I go to a park for a few hours with a notebook and some music, and take stock of this life I’ve been given. I go over the big spheres of my existence: spiritual, family, community, writing. I assess and think about what I’d like to do better.
I look again at books that have spoken me over the years, like A. W. Tozer’s The Pursuit of God and Ray Bradbury’s Zen and the Art of Writing. I also like to bring along a favorite novel or two, which fires up fresh inspiration in me. Novels that remind me how sublime writing can be in any genre. Books like John D. MacDonald’s Cancel All Our Vows and Raymond Chandler’s The Long Goodbye.
What books would you choose for a day like this?
2. Set Goals
I believe in goals. I’ve set goals for myself every year, and it’s the only way I can look back and explain whatever it is I’ve managed to accomplish. If you are not satisfied with where you are, the best way to remedy that is to plan to get to where you want to be.
Goals give your dreams walking shoes.
The way to set goals is, first, decide exactly what you want to achieve. This has to be something you can control and measure. If you want to be a New York Times bestselling author, that’s not a goal because you can’t control it. What you can control is your writing schedule, your training, your word count, your study of markets and so on.
Write your goals on paper. There’s something about pen and paper that cements a goal in your mind. Every now and then write your goals again on a fresh piece of paper. That pours fresh cement.
Write your goals in present tense, as in I will…
…write 3,000 words a week.
…complete my novel by March 1.
…query three agents on April 20.
…self-publish my novel on June 1.
I would advise setting five writing goals for yourself each year.
One of your goals should be growth as a writer. We don’t tell our brain surgeons to stop studying the medical journals. Why should we tell our writers to stop studying their craft? (At least when a writer makes a mistake, nobody dies.)
Take the plunge and go to a good writers conference next year, like Story Masters. Come spend four solid days immersed in the craft of fiction with me, Christopher Vogler (Hollywood’s mythic structure guru) and super-agent Donald Maass. Story Masters 2015, runs Feb. 5-8 in beautiful Charleston, SC.
By the way, if you use this code SMFLYER when you register, you’ll get $50 off.

This is important: Take some action toward at least one of your goals every day. If you miss writing one day, at least read an article in Writer’s Digest. Reward yourself when you reach a major benchmark. Do this, and you will begin to feel unstoppable. That’s a good way for a writer to feel.
And decide, right now, that you will never quit. You are a writer, not someone who wants to write a novel or five. Not someone who hopes to make some scratch. A writer.For the rest of your life.
3. Simplify Your Life
The past few generations have each had their simplicity movements. From the hippies of the 60s to Richard Carlson’s Don’t Sweat the Small Stuff in the 90s, right down to today with what some are calling the “minimalist movement.” (On this, see a post over at Writer Unboxed by Jan O’Hara).
Uncluttering your life is always a good thing. I’m reminded of the great soliloquy delivered by the hobo (played by Walter Brennan) in Meet John Doe (1941, dir. Frank Capra). He warns people not to become “heelots.”
You’re walkin’ along, not a nickel in your jeans, you’re free as the wind. Nobody bothers you. Hundreds of people pass you by in every line of business. Shoes, hats, automobiles, radios, furniture, everything, and they’re all nice loveable people. They let you alone…Then you get ahold of some dough and what happens? All those nice, sweet, lovable people become heelots. A lotta heels! 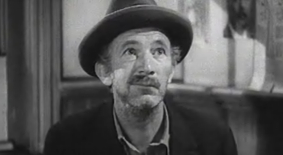 They begin creepin’ up on ya, tryin’ to sell ya something. They got long claws and they get a stranglehold on ya and ya squirm and ya duck and ya holler and ya try to push ’em away, but you haven’t got a chance. They’ve got ya. The first thing you know, you own things – a car, for instance. Now your whole life is messed up with a lot more stuff. You got license fees and number plates and gas and oil and taxes and insurance and identification cards and letters and bills and flat tires and dents and traffic tickets and motorcycle cops and courtrooms and lawyers and fines – and a million and one other things! And what happens? You’re not the free and happy guy you used to be. You’ve gotta have money to pay for all those things. So you go after what the other fella’s got. And there you are – you’re a heelot yourself.
Try this: give up one thing this year that you really don’t need. Skip one hour of television a night. Use that hour to write 200 words. An extra 200 words a day is an entire extra novel a year!
4. Be Grateful
Writers have many ways to make themselves miserable. Reading reviews, obsessing over sales rank, comparing ourselves to other writers. I keep thinking of one of the oldest jokes in the book:
Patient: “Doc, it hurts when I do this.”
Doctor: “Then don’t do that.”
Stop doing the things that lead to misery. Do not, I repeat, do not click on that one-star review. I’ll let you peek at a five-star every now and then, but don’t let it go to your head. It’s better not to get caught up in either praise or criticism.
Instead, learn to be thankful. The religious sages and sagacious philosophers have taught us that the secret to happiness is gratitude.
Be thankful for every single good thing in your life, from the ability to get up in the morning to the people who love you most. Be thankful for the existence of language and beauty, of music and food. Write these things down and look at the list often.
Be thankful even for obstacles and challenges, because it is in meeting those that we grow stronger.
Finally, be thankful that you yearn to tell stories. It’s a good thing to have that inner fire. It makes life brighter, and reminds you that you are a human being and not a chair.
So here is a year-end toast to the scribes, the mad ones, the strange breed not content to trudge through life in the tight shoes of the ordinary but who, in Kerouac’s words, burn, burn, burn like fabulous yellow roman candles exploding like spiders across the stars and in the middle you see the blue centerlight pop and everybody goes “Awww!”
May your writing pop ever brighter in 2015!